A group of thieves rammed a car into a Georgia gun store and made off with nearly $70,000 in rifles Sunday.

Three men in hoodies backed a stolen sedan through the front window of the AR Bunker around 4:50 a.m. In less than a minute, the thieves loaded up and made off with nearly 35 rifles, many of which were AR-15s. Newnan police officers responded to the scene seconds later, but the crooks had already gotten away, Atlanta Journal-Constitution reports. 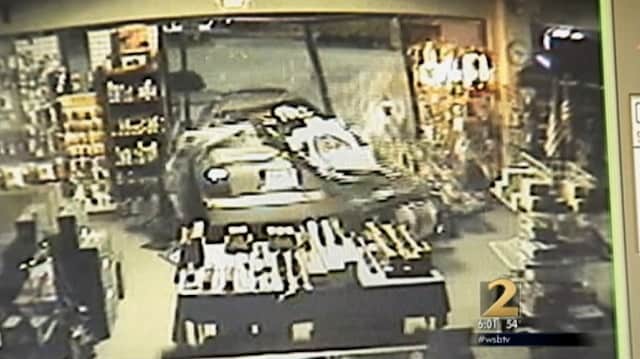 The crooks rammed a car through the front of the AR Bunker and made of with nearly $70,000 in rifles.

“The Newnan police responded first, and were here within 15 to 18 seconds after [the thieves] pulled out of the shop,” said Rusty Morris, co-owner of the AR Bunker.

With a car-full of  stolen firearms, the thieves raced to a nearby industrial park. Police believe they made a wrong turn and after discovering they were lost, carried the rifles through the woods to a nearby interstate, dropping some as they fled.

“The Coweta County Sheriff’s Department has already recovered some of the guns that were left in the vehicle and then some that were found along the trail that was towards the interstate, so we’re assuming they grabbed as many guns as they could when they jumped out of the car,” Morris said.