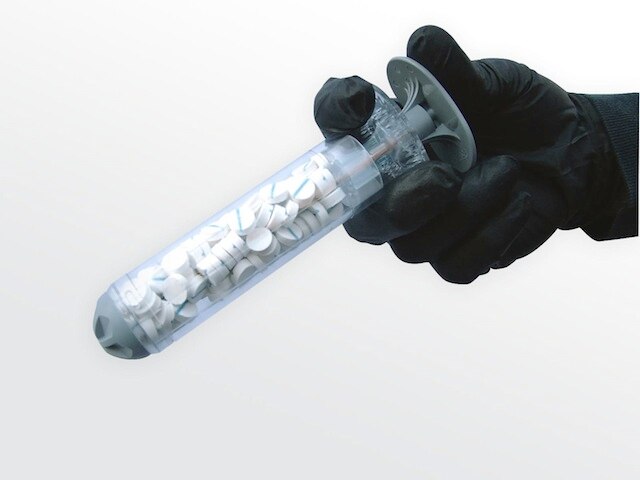 The XStat is inserted directly into the gunshot wound and the specially coated sponges quickly expand to stop bleeding.

A new pocket-sized invention from RevMedx can save a wounded soldier on the battlefield by sealing a gunshot wound in as little as 15 seconds.

The sponges are naturally cling to moist surfaces and don’t get pushed out of the wound like traditional gauze.

The XStat is a modified syringe filled with tiny, specialized sponges created by Oregon startup company RevMedx. The contents are injected into the wound and within seconds the sponges expand and fill the cavity, stopping bleeding. The device has shown significant promise and has even garnered $5 million from the U.S. Army to help the team see the project to the end, Popular Science reports.

Former U.S. Army Special Operations medic John Steinbaugh, who has deployed over a dozen times to Iraq and Afghanistan, joined the RevMedx team in 2012. He says the XStat holds a considerable advantage over traditional gauze bandages, which “just don’t work for anything serious.”

To ensure no sponges are left in the wound, X-shaped markers are added that can be detected by an x-ray. But RevMedx hopes the finished product will use biodegradable sponges that will be absorbed by the body.

RevMedx is working on other developments to address larger injuries, like those caused by land mines and IEDs.

“I spent the whole war on terror in the Middle East, so I know what a medic needs when someone has been shot,” Steinbaugh says. “I’ve treated lots of guys who would have benefited from this product. That’s what drives me.”