FN FAL: 'The right arm of the free world'

During the Cold War, the world was divided into NATO, the Warsaw Pact and a few neutrals. While the US went with the M14/M16 and the Soviets chose the humble AK, the rest of the world went another way—the FN FAL. 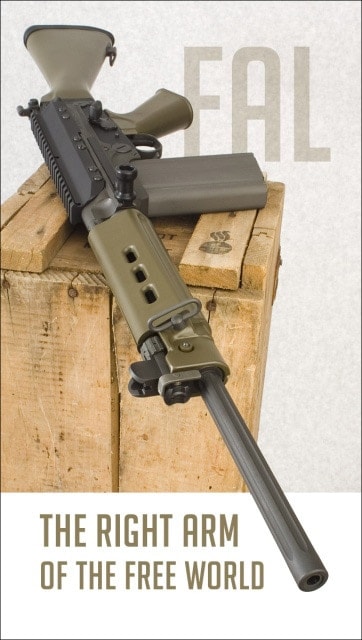 FN FAL armed most of the Western world and their allies during the Cold War era.

In the late 1940s, the Western allied countries in the NATO military pact were shopping for a new, modern battle rifle. With the Soviets and their Eastern bloc pals armed with the SKS and the select-fire AK-47, the bolt-action Enfields, Mausers, and MAS rifles of NATO were totally outclassed. 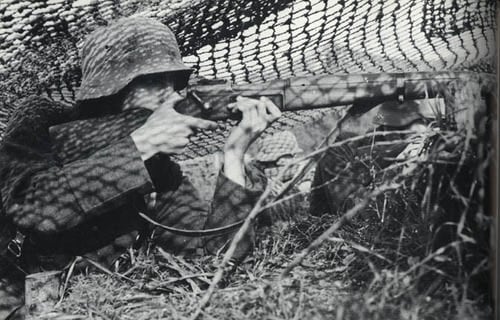 MAS-36 rifle being shot by a German soldier at the tail end of WWII.

The Americans and British were rapidly testing new rifles at the time but Belgian arms giant FN—just recovering from the war and Nazi occupation of their factories themselves—turned to their master gun wonk, Dieudonne Saive to see what he could come up with. 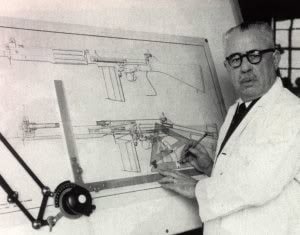 Dieudonne Joseph Saive had been FN’s Chef de Service (chief weapons designer) for nearly two decades. When firearms genius John Moses Browning died, leaving his double-stack 9mm pistol incomplete, Saive finished it, creating the famous Browning Hi-Power. Besides that accomplishment, he had a hand in the Baby Browning pistol and the FN-49 rifle. It was this last gun, a gas-operated semi-automatic rifle that Saive used as a basis for FN’s new select-fire battle rifle.

Taking the basic gas operated, tilting breechblock, of his FN-49, he modified it to become capable of select-fire at up to 700-rounds per minute. Unlike the old bolt-action rifles of the World Wars that held 5-10 rounds at most, the new FN gun would be fed by detachable box-magazines that could hold 20-rounds reliably. A 21-inch barrel gave the gun a length of 43-inches overall.

While this may seem long compared to today’s rifles, it should be remembered that the typical Mauser bolt-action rifle, which the new gun would be replacing, was also 43-inches. Weight came in at 9.48 pounds, unloaded, largely due to the gun’s wooden furniture and milled receiver (rather than the stamped receiver found on the AK47). 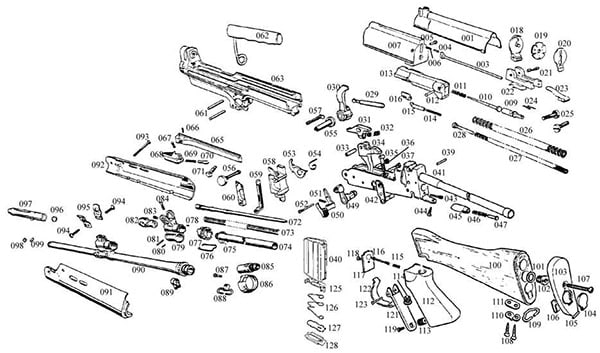 Ready for production by 1953, FN called its new rifle the Fusil Automatique Leger (French for “Light Automatic Rifle”). This of course, was simplified as FAL. 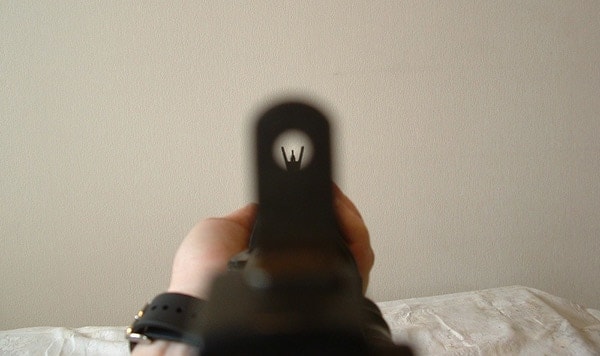 Soldiers of the 7th Royal Australian Regiment March through Sydney with FALs, 1968.

FN found the type of success with the FAL that weapon company’s only dream about. Between 1953-1988, they made over 2-million of these guns for customers around the world. These included shipments to Germany, Colombia, Chile, Ireland, the Netherlands and others. All told, it would be used by the militaries or police forces in something like 90 countries. These included not only the standard model FAL 50.0, but also the 13-pound FALO squad automatic weapon (with a heavy barrel and 30-round magazine), the folding stock FAL 50.61, and the “Paratrooper” model 50.62/63 with folding stock and 17-inch barrel.  Originally built around the intermediary 7.92×33mm Kurz, the large caliber rifle was predominately chambered in 7.62×51mm NATO. 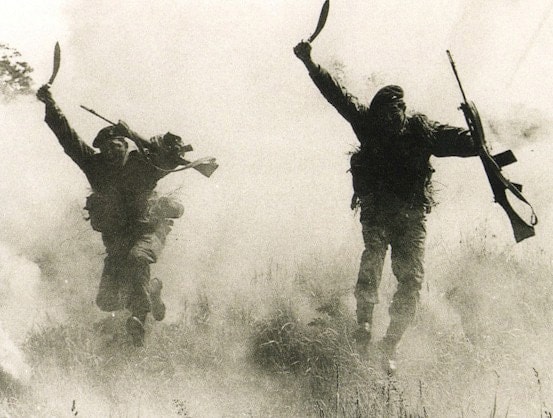 Besides the FN-made guns, several countries made their own under license.  A big market for license-made guns of this Belgian design was Brazil (Imbel) and Argentina (FM), who made hundreds of thousands of these arms. Israel was another early maker of the FAL, using it to finally replace WWII-era Mauser and Enfield rifles and augment the locally made UZI submachine gun. The problem was, the FAL was prone to jamming in desert conditions, which failed to amuse the Israelis. 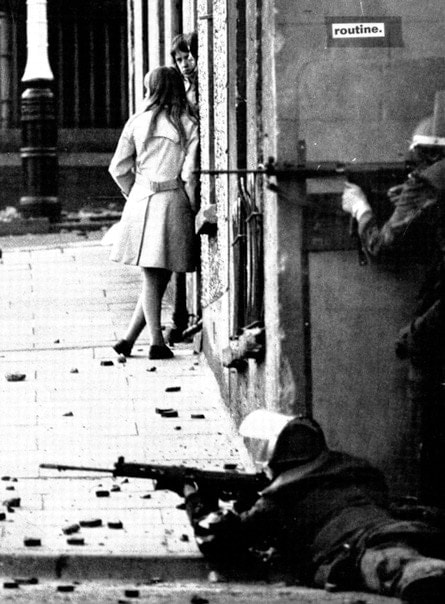 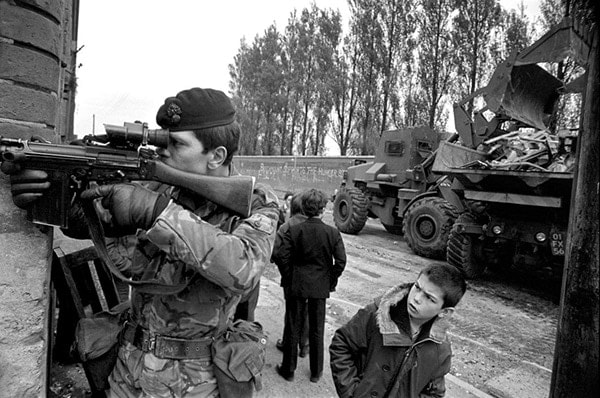 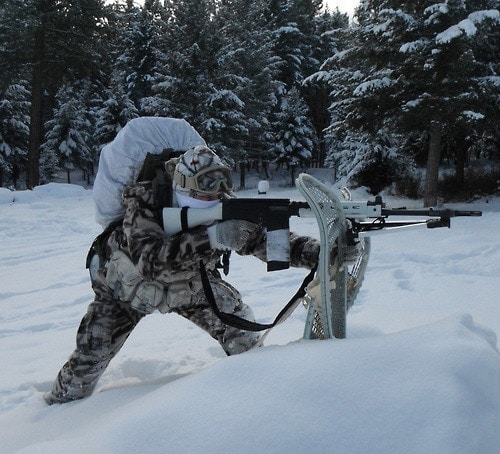 The 13-pound FALO is a squad automatic weapon version of the FN-FAL.

This fact was better known to the British who had from the start designed their own licensed semi-auto only FALs (made by Enfield and dubbed the L1A1) with sand cutouts in the bolt carrier as they were known to be engaged in desert climes from time to time. This proved helpful to British SAS operators in Oman, Aden and other places they never officially were throughout the 1960s and 70s. Following Britain’s lead, Australia, Canada, South Africa and India license-made the FAL in their own semi-auto versions. These guns saw combat in the Falklands (where British soldiers armed with FALs fought Argentine soldiers—armed with FALs). 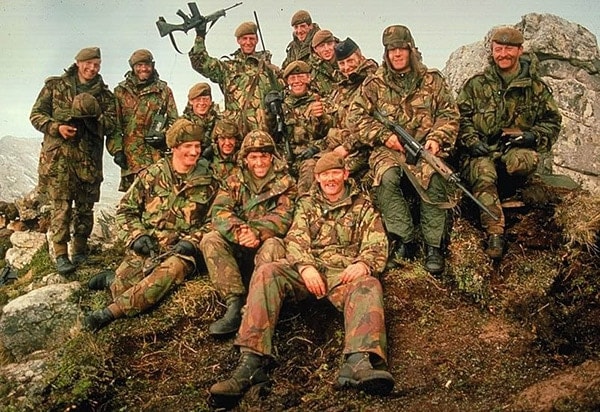 L1A1 rifles seen here in the Falklands with British troops. 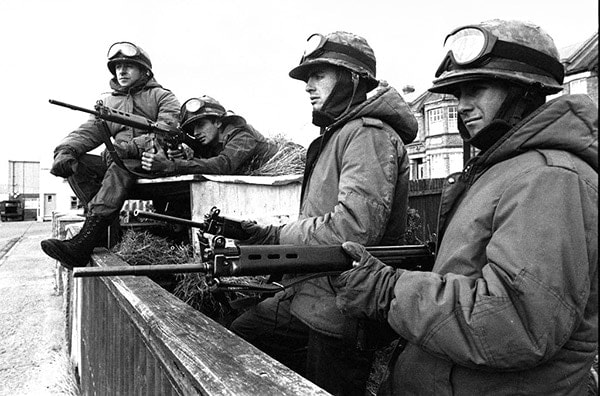 FN FAL FMPs with Argentine army troops in the Falklands, 1982. 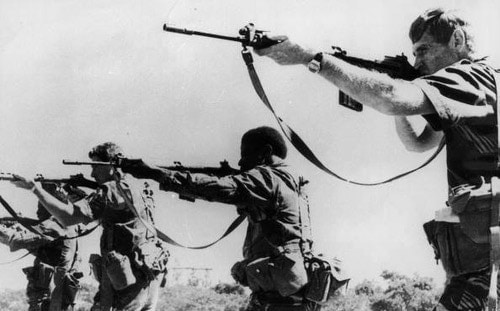 Rhodesia used the FAL in its semi-automatic British/South African version, distinctively painted in so-called baby poop paint. This series of green and yellow splotches is very popular among collectors today who often recreate it in home-build versions.  These guns were the iconic weapon of that country’s 15 year long Bush War.

Even small so-called neutral countries, courting no enemies, adopted the FAL, as it surely seemed like a good idea at the time. This included tiny Austria (who produced it locally by Steyr as the STG58), Costa Rica, the Dominican Republic, and Nepal. This left the non-Communist world from the Himalayas to the Alps to the Andes all guarded by the FN battle rifle. 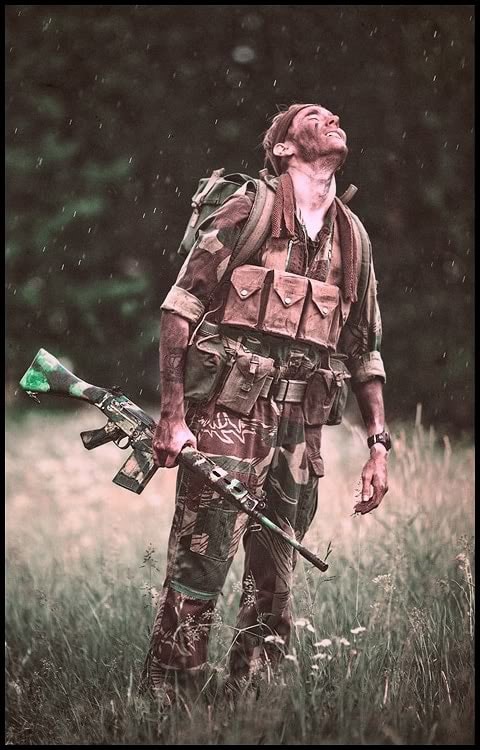 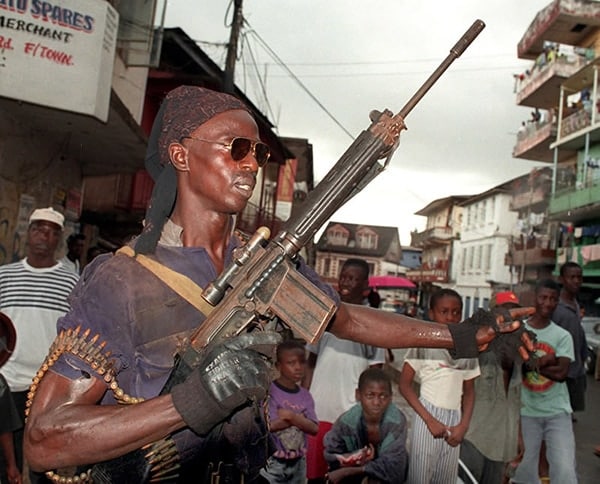 The FAL still shows up often in military “hot spots” as seen by this rusty example recently photographed in Liberia. 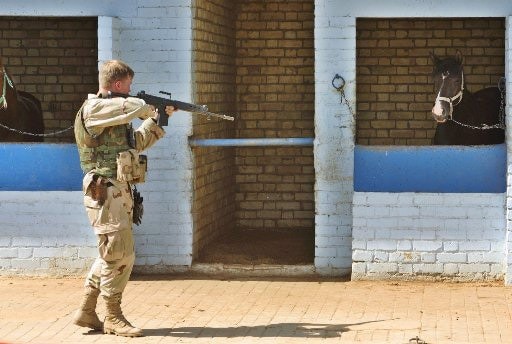 US Army Capt. William Summer questions a suspicious looking horse in Iraq with a FAL at the ready, 2007. 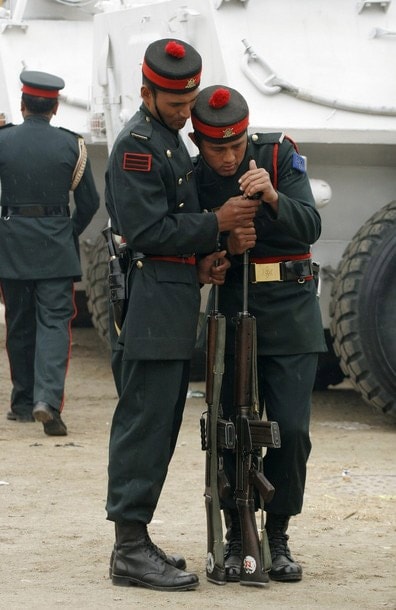 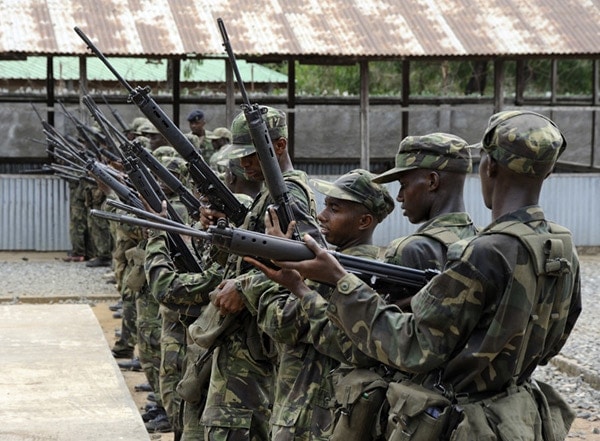 The death rattle of the FAL was sounded by NATO’s adoption of the 5.56mm round as standard after 1964. First the US, then France, and Germany all began to select lighter, more controllable weapons such as the M16, FAMAS, and HK33, all chambered in 5.56 to replace the vaunted 7.62mm battle rifles of the 1950s and 60s. 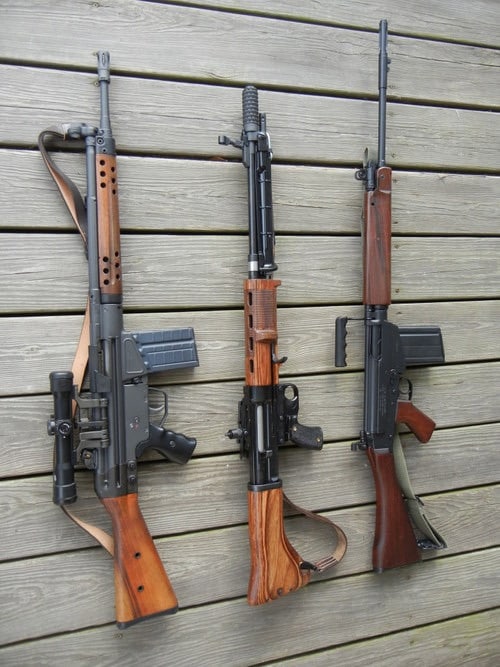 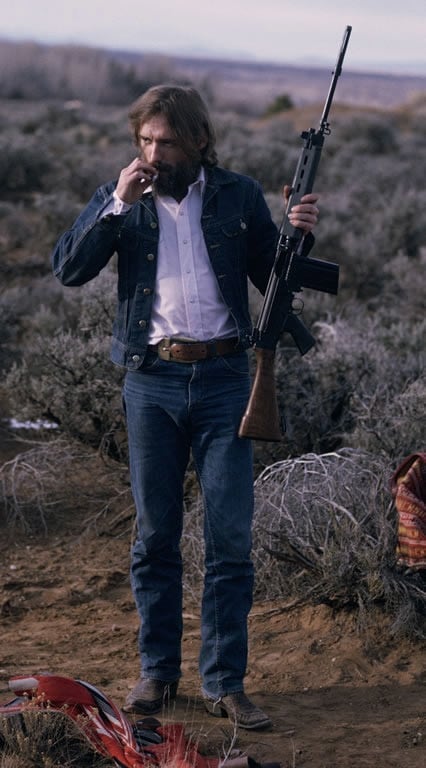 Actor Dennis Hopper was an avid FAL owner as seen here with his FAL G in Taos, New Mexico, 1970.

One by one, the Free World went to smaller caliber weapons. By the 1989s, even FN got into the act and designed the 5.56mm FNC to replace the FAL on their assembly line.

Today, the FAL is still in widespread service around the world, but this is with smaller militaries such as Cambodia, Togo, and Suriname. Even NATO members like Turkey and Greece, long known to keep military hardware around for generations, have gone 5.56.

Nevertheless, 60-years of service around the world and an unmistakable silhouette have given the FAL a lasting legacy. With the possible exception of the M14/M1A rifle, the FAL is perhaps the most desired 7.62x51mm battle rifle in the US today. This has collectors rushing after both parts kits and out the box versions of the gun for their own.

The best bet for many would-be FAL junkies is building a gun from a parts kit. In this, you simply take a new semi-auto receiver and legally build your own gun around it Frankenstein-style using torched parts sold by distributors.

FAL parts kit. Home builders should be aware parts come in both millimeter and inch varieties.

When you get into the different parts kits, be sure to chose either metric or inch patterns and stick by it when acquiring parts.  If the last sentence puzzles you, remember that the FN FAL and its variants were made by both countries that used millimeters and centimeters (Belgium, Brazil, Austria) and countries that used inches (Britain, Australia, Canada etc.), so be aware, you can find parts for either but they aren’t necessarily interchangeable. 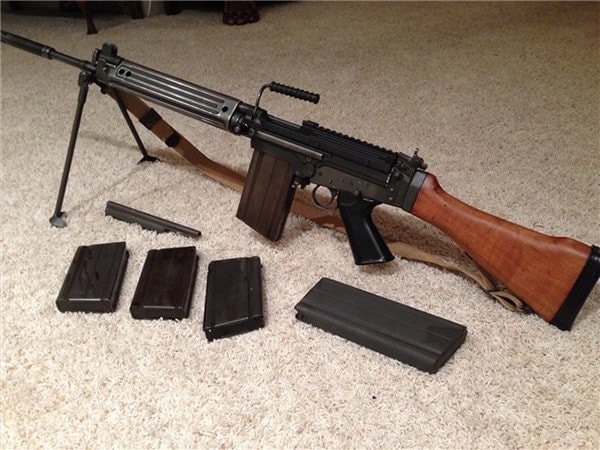 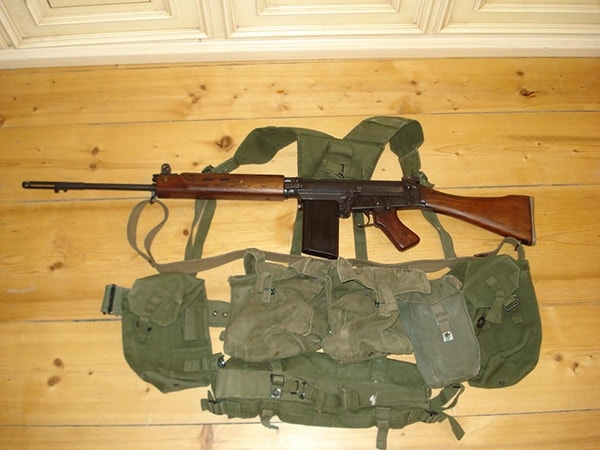 Of course, since most FAL variants were metric, and many ‘inch’ models such as the Australian guns were destroyed rather than sold as surplus, metric versions will continue to be more common on the surplus market. Further, since Imbel is still making and exporting FAL metric receivers, this would seem the logical way to go for first time builders.

But no matter what you build, soak up the reference sections of the FAL Files web forum before you start shopping.  When you do, you will find kits out there currently ranging from $400-$700. This, when you add the price of a receiver to it, may or may not be worth it to you. 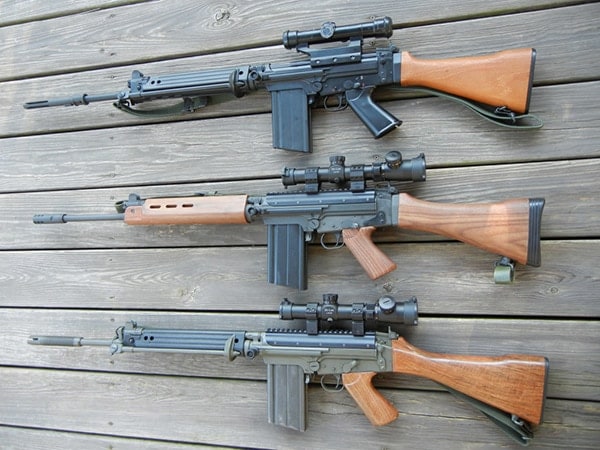 If you don’t want to fool around with building your own, there are still many options out there for the interested. Century made what they called the R1A1 rifle from bins of parts kits that often left both inch and metric pieces on the same gun. These, as you can imagine, are the bottom rung of the semi-auto legal FAL food chain in the states and can usually be picked up for $800ish. Other guns made on new receivers but using a mix of old, (usually metric) parts include the DSA STG58 and the Imbel/Enterprise FN Paratrooper. Either of these starts at $1000 and move up rapidly from there. 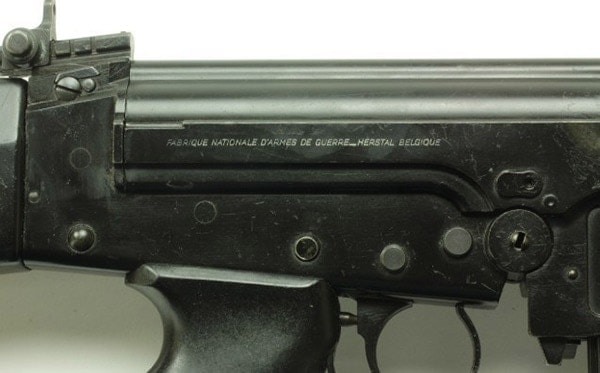 FN marked FALs in any version are the hot item.

In the early 1960s, around 1,800 Belgian made FN G Series FAL semi-auto rifles were imported to the US.  These guns are wildly expensive, typically over $5,000 but are about as close as you can get to the real thing without a tax stamp. This is because these guns were built on regular FAL select-fire receivers just without the actual lever to trip the gun into that third position.

Then of course, there are actual Class III NFA-registered FALs that are capable of legal full-auto fire. As with any transferable machine gun, they are largely worth whatever someone wants to pay for them. However, be prepared for a starting point on these to be around $10K.

Either way, old Dieudonne did FN a good days work.