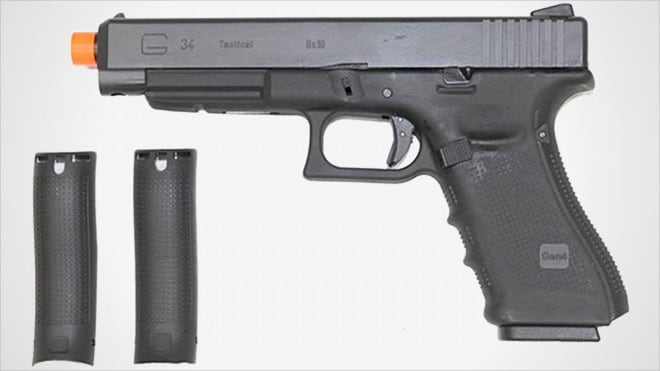 Glock has filed a major lawsuit against prominent airsoft vendor AirSplat for selling unlicensed replicas of Glock pistols in airsoft form. They have filed 11 charges against AirSplat that run the gamut from patent infringement to trademark infringement and false advertising.

AirSoft is self-described as the largest airsoft retailer in the U.S.

They are suing to halt the sale of these pistols and seeking AirSplat’s profits, triple in damages and punitive damages in addition to their attorney’s fees. Additionally they’re asking to have all of the named Glock replicas turned over to Glock for destruction along with all their marketing and manufacturing materials, if any.

Glock has a history of pursuing companies that manufacture replicas of Glock pistols, whether they are BB guns like these, starter pistols, toys or real guns that share external similarities with Glock’s trademarked design. Likewise, AirSplat has previously been the target of lawsuits for selling unlicensed airsoft guns.

While AirSplat doesn’t manufacture the replicas and even goes as far as to include the warning “This airsoft gun is not to be misrepresented as a real firearm or gun that is manufactured by Glock and is merely an airsoft gun that fires 6mm pellets,” on their product pages, Glock maintains that AirSplat is fully-aware that these are unlicensed replicas and that marketing and selling these guns does harm to the Glock brand and their business.

Because many of these airsoft manufacturers are based overseas, Glock has little leverage to file suit against the companies directly doing the infringing.

While it is legal for companies to import and sell airsoft guns that don’t feature gun companies’ trademarks on them, Glock holds a trademark on the design itself, in addition to the patents.

In the lawsuit Glock claims that AirSplat has been deliberately trying to foil Customs and Border Patrol searches by importing trademark-infringing pistols in plain, unmarked boxes.

The easily-recognizable outline of a squared-off slide, as seen from the side, front and rear combined with the unique polymer frame style is a registered Glock trademark. Because of this, even airsoft pistols that lack the Glock logo infringe on Glock’s holdings, if they are similar-enough in external appearance.

Glock has used this trademark to successfully pressure other companies to change their designs, including ISSC and the Maxsell Corporation. 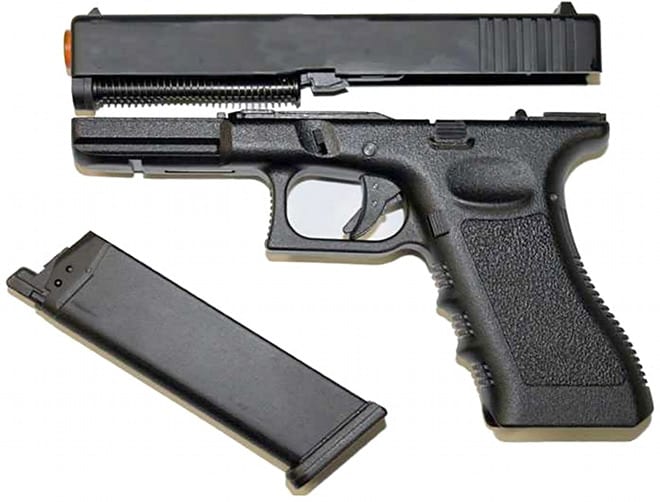 This is a photo of a KSC G17 airsoft pistol taken from the AirSplat website. As you can see, the slide has been touched up digitally.

Glock is also suing Airsplat for infringing on their trigger safety and backstrap patents.

This isn’t the first time a major firearm firm has brought charges against vendors, not manufacturers, of airsoft replicas. Two years ago Heckler & Koch won a major lawsuit against a handful of vendors selling unlicensed H&K airsoft replicas, including AirSplat.

One thing that made Heckler & Koch’s claim stand out was their intent to market their own fully-licensed airsoft guns. Glock has not announced any intentions to develop an airsoft brand of their own (although they do have a trademark on it) so some of the claims against AirSplat might not hold as much water.

For instance, Glock claims that AirSplat is falsely advertising these pistols as Glock products. Without any actual Glock-branded airsoft products it’s questionable whether or not anyone thinks these guns actually have anything to do with their real-world counterparts, especially when the AirSplat description of these guns denies any affiliation with Glock.

Glock maintains that the presence of their trademarks and trade dress are enough to leave some buyers confused, and that these airsoft guns can affect the image of Glock’s firearms, brand and reputation.

Glock is asking for a trial by jury.

While some of their claims might not track completely with the court, based on previous cases, including those against AirSplat, it’s not outlandish to assume that Glock will get some of their way if this goes court. It is also possible that they intend to settle out of court, as Glock has done with other companies in the past.

One thing is clear: Glock is on the move for these replicas. “Don’t bring a BB gun to a Glock fight” might soon be the caution of the day.