What would you do if you are a venerated rifle and shotgun maker and your customers keep asking about hunting pistols?

Simple. Take your proven bolt-action rifle, chop it down, and give the world the Remington XP100.

When you look at the Remington XP100, at first you may think it’s a sawn off rifle, similar to the Russian Obrez—and in concept you wouldn’t be too far off. Remington, instead of trying to make an accurate pistol, took the action of an already accurate rifle, and set it into a dedicated handgun-sized frame. 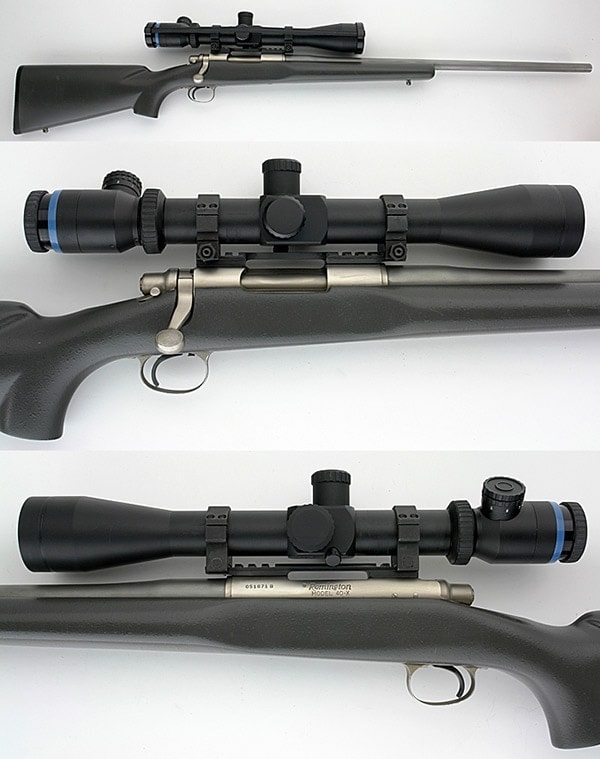 Remington Model 40x rifle. This rifle action was used as the basis for the XP100 pistol. 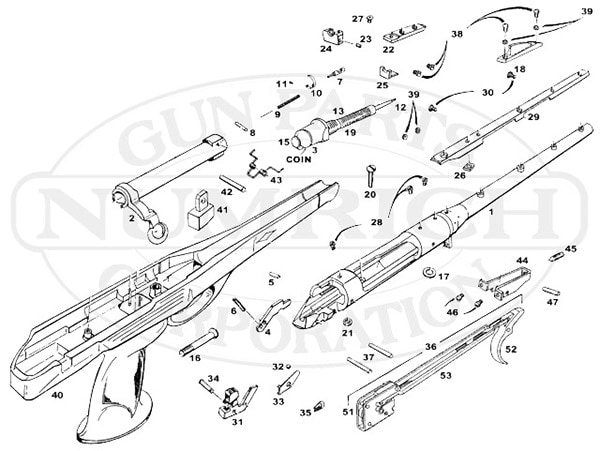 The action in question for this experimental pistol came from the company’s Model 40X rifle. The short-action 40X was (and still is if you can get one) a tack driving target grade gun first introduced by Remy in 1955 as a further development of their Model 722.

Its popular calibers, besides .22 rimfire, were .222 Remington and .308 Winchester. A single-shot bolt-action rifle, it had an incredibly strong lock-up. Manufactured to tighter tolerances than the already-accurate Model 700, the 40X shot so well that it soon became the most sought after American bench rest action of its day. 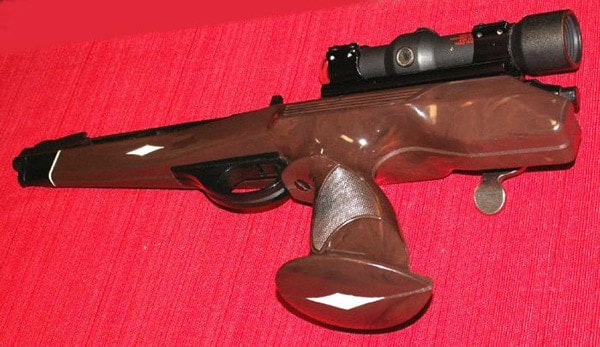 The original 1962 XP100. These are often found with the typical Remington white diamond inlays on the pistol grip and forearms. 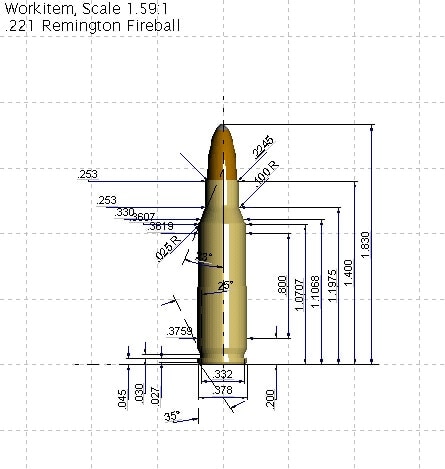 A schematic look at the .221 Remington Fireball. The name ‘fireball’ is an allusion to the muzzle flash.

With this borrowed bolt-action married to a dedicated frame that was always meant to be pistol, the handgun was fitted with a brown nylon stock without a butt, if only to comply with ATF regulations.

The main grip of the gun was a centerline pistol grip placed roughly in the middle of the frame. The gun was fitted with a one-piece DuPont “Zytel” 101 plastic stock that was a clone of the one found on the revolutionary Remington Nylon 66, complete with the inlayed white diamond patterns.

The 10.5-inch barrel was far longer than what is normally found on a pistol, yet so short that if it was on a rifle it would have to be registered as a SBR to be legally sold.

When it came time to find a round for their new bolt-action pistol, Remington first turned to their love of the moment, their .222 caliber cartridge, though it was soon found out that it was not efficient in the short-barreled pistol. The unburned powder of the long cased round gave a huge muzzle blast and fireball flash. To fix this they trimmed the case of the .222 back and added a 50-grain .224 caliber bullet to the top of it.

With a standard 10.5-inch barrel, the Remington XP100 is one of the most accurate long range pistols ever made, be it with target sights or optics.

The muzzle blast was still fierce yet manageable, but the fireball was still there. As almost an open joke, the company dubbed the new round .221 Remington Fireball. This round, out of a 1:14″ RH rifled 10.5-inch barrel could clock over 2600fps and deliver over 700-pounds of energy on target, while still having mild recoil. 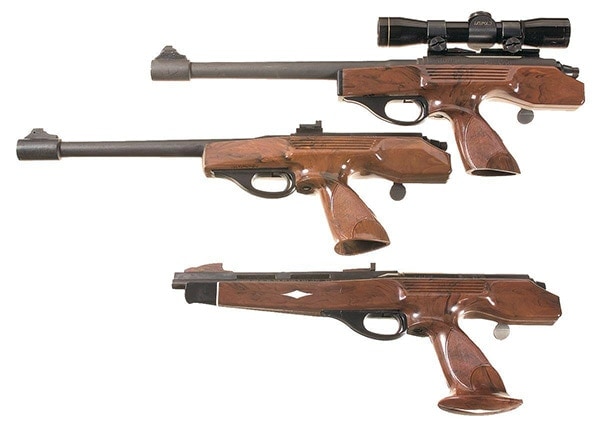 The result was a 16.75-inch long single-shot handgun that weighed 60-ounces (3.75 pounds).  This unlikely combination of plastic-stocked bolt-action pistol and its chopped down ammo was at the time the most powerful factory handgun ever produced. 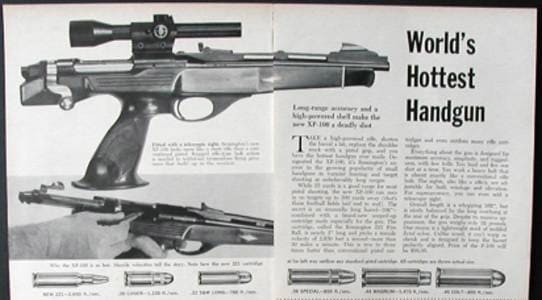 The XP-100 was advertised as the world’s hottest handgun and for years dominated the handgun hunting market due to a superior design and a relative lack of competition.

You have to remember, in the 1960s there were precious few options for dedicated handgun hunters, with guns like the .44 Automag and .454 Casull only then on the drawing boards.

This gave the XP100 a near-monopoly on those who wanted a super compact ranch or trail gun that could also prove hyper accurate on the range. Further, it displayed laser-like accuracy in the field, with tales of varmint hunters drilling little woodland creatures out a couple football fields away not uncommon. Ultra long-range handgun shooters regularly won 1000-yard (that’s four digits) matches with tricked out XP100s. 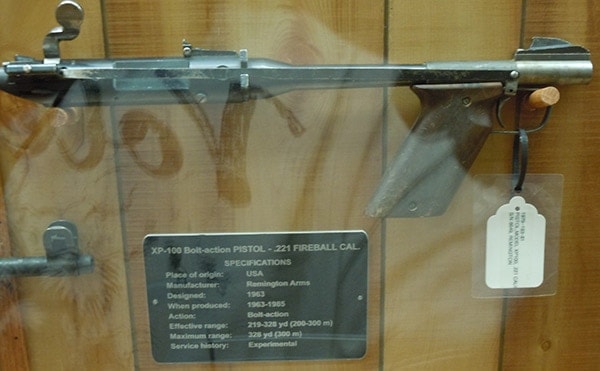 Most commonly this handy rifle—err, we mean extremely long pistol—was chambered for centerfire .22 caliber rounds. This included the zippy .221 Fireball, .222/.223 Rem, and 22-250. However, for those who wanted more punch there were 7mm BR and .35 Remington options for those more serious large game hunters.

The US Air Force even picked up a few .221 Fireball chambered XP100s in the late 1970s for testing. They apparently liked the idea of a stripped-down, all-metal version of the gun as a survival weapon for downed aircrews. One, S/N 8649 survives on display at the Air Force Armament Museum at Eglin Air Force Base with its stock removed and its grip moved all the way forward. 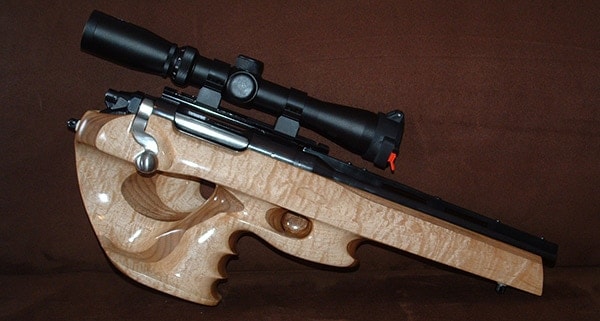 Playing with these bolt guns led to the aborted GUU-4/P ‘arm-gun’ of the 1980s, but that is another article. There is even an enduring rumor that the XP100 was the gun that was ‘really’ used to assassinate JFK.

A dogleg bolt action with white diamonds and Zytel stock marks this Remington XP100 as a nice early gun.

The XP100 came in two main variants. There is the original single-shot version that had a dogleg bolt at the rear of the gun with its grip mounted in about the center of the frame.  Then, from 1990, the company also produced a XP100R version. With a small internal box magazine that held a few extra rounds, the ‘R’ stood for ‘repeater’. To allow the shooter to better work the bolt to reload, the grip was moved to the rear of this variant and it was fitted with a DuPont Kevlar stock. It also came in a few extra calibers that the regular XP100 was never made in.

The XP100R has the grip at the rear of the pistol to accommodate the internal magazine.

Still, for many the gun was neither fish nor fowl. It was overkill as a handgun and, lacking a buttstock or long barrel, didn’t fit the idea of what a rifle was either. The last XP100 of any type left the Remington factory in 1995. 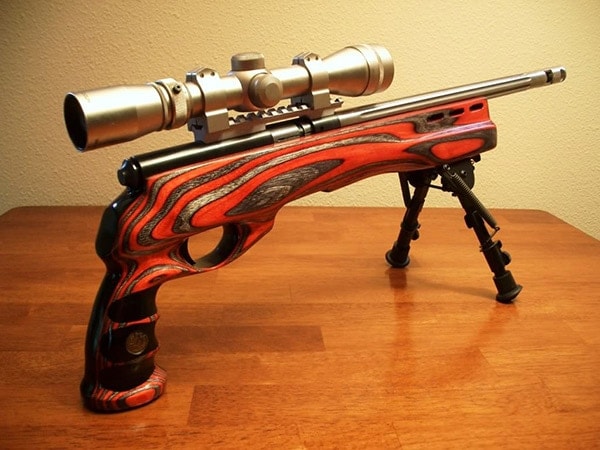 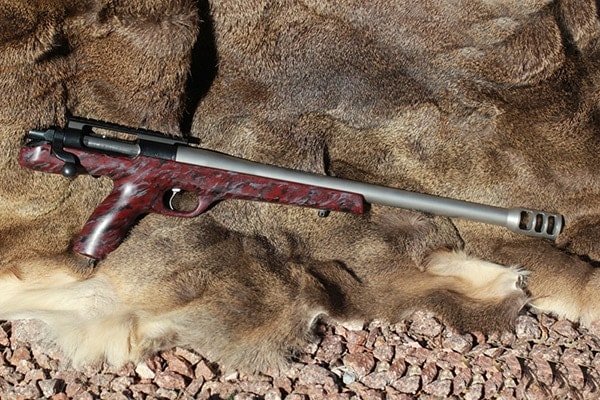 Remington cornered the market on these unique handguns for a generation. When other makers saw that this rifle-caliber pistol was here to stay, they soon coughed up their own designs.  Savage Arms introduced their Striker model in 1998. Thompson Center arguably based their entire business model on the concept of a rifle-caliber handgun for hunters and target enthusiasts. 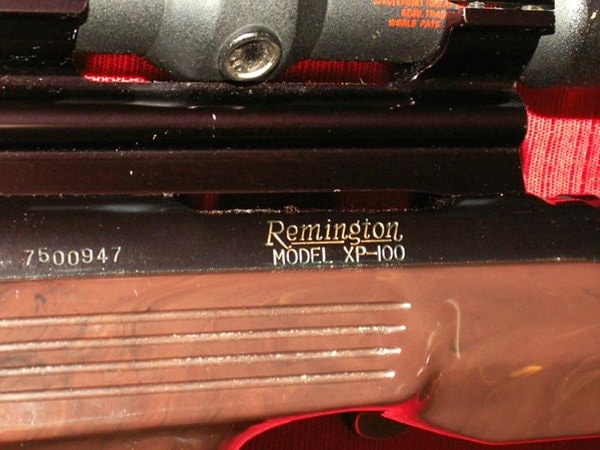 There was a recall on these guns done in 1979 by Remington to correct an issue with the trigger that could cause accidental discharges. Should you have a Remmy XP, check your serial number to see if it’s one of these recalled. To tell if you have a pre-79 gun, all XP100s with serials below 7507984 – except those beginning with an “A” or “B” before the number – were subject to the recall. Those that came back were fixed for free and will have an “O” (approximately 1/4 inch high) stamped on the left side of the receiver tang opposite the letter “S” on safe position.

XP100r models will be very well marked as such.

Like a vintage 1960s muscle car, it’s getting harder and harder to find a nice XP100 in its original condition. Quite often these guns have been tricked out with multiple optics platforms, exotic aftermarket stocks (that can cost more than the gun), and heavy custom barrels. This has left the supply of OE guns in an ever-shrinking pool. 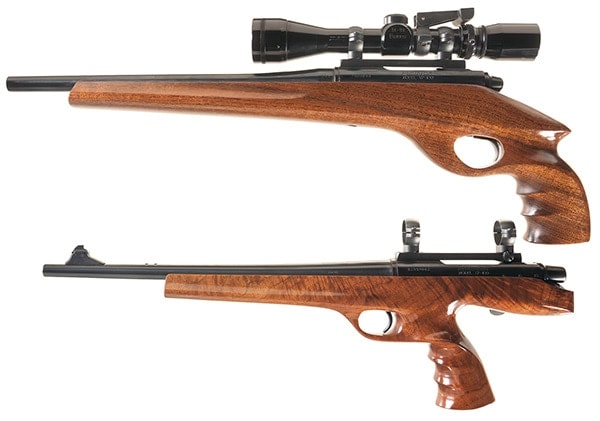 XP-100s in custom stocks. These high grade aftermarket stocks can cost more than the gun itself and rarely help a gun retain it’s original value. As such, they are usually found in the homes of hardcore handgun hunters/competition shooters.

With that in mind, if you have your eyes set on a Remmy bolt-action pistol for a good price, make the decision on whether it’s a shooter or an heirloom. If it has been modded or the original condition of the gun is scratched or marred, shoot the heck out of it. If its 1960s-70s goodness with the white plastic diamonds and cheesy original zipper bag for it, put it in the safe and love it. After all, think about how collectable the Nylon 66 has become in the past decade.

Bottom line, have fun with your fireballs.