Before the Remington 700 was a thought, and while Bill Ruger’s Model 77 was still thirty years off, the classic American bolt-action hunting rifle was born. This gun was the Winchester Model 70, and it has proven itself for three quarters of a century.

Thomas Crosley Johnson was born during the Civil War and, with the exception of John Moses Browning, did more to create Winchester’s modern firearms than any other firearms engineer. He created the M1911 (Widow Maker) autoloading shotgun, the exquisite Model 12 pump shotgun, the M1905 (America’s first autoloading centerfire rifle) and others. In 1925, at age 63, Crosley created his masterpiece—the Model 54 bolt-action rifle.

It was a slick-action turn bolt rifle that drew on the old Mauser rifles of the turn of the century and improved upon their strong points. Winchester used it as a successful platform to introduce the brand new .220 Swift and .270 Winchester calibers to the market but the public just loved the gun. The problem was the Model 54 wouldn’t accept an aftermarket optical scope over the top of the receiver due to the long throw of the bolt. And this led to a slight redesign.

Design of a classic

A Winchester Model 70, ready for the field.

Unfortunately, Crosely went to that great firearms factory in the sky in 1934 and within a year of his death, Winchester had taken his Model 54 and changed the bolt. The heavy one-piece bolt still used the same Mauser-style non-rotating extractor claw that Crosley had designed, and coupled it with a cone shaped breech that had safety cutouts. Two locking lugs cammed shut and in theory were even stronger than the Mauser was since the extractor held the case through an opening in the bolt face.

This type of bolt-action was called “Controlled Round Feed,” and is used today on FN’s series of police sniper rifles—but more on that later.

Rounding out the new gun was an ordanance steel-grade barrel, walnut stocks, and deep salt bluing. A fixed internal box magazine with a steel floorplate could hold 3-5 rounds (depending on the caliber) in reserve. Better yet, the bolt itself had a short throw, allowing the mounting of a scope.

The Winchester factory of the 1930s was labor intensive and fitted each gun by hand, cutting the stocks, milling the bolt, cutting and rifling the high-grade steel barrels. In effect, each of these guns was a work of art, made by an artisan who excelled at his trade. The result was an accurate, reliable, and arguably beautiful rifle that was as functional as it was pleasing to the eye. Introduced into the market in 1936, the new bolt-action rifle, already drilled and tapped for scopes, was labeled the Model 70. 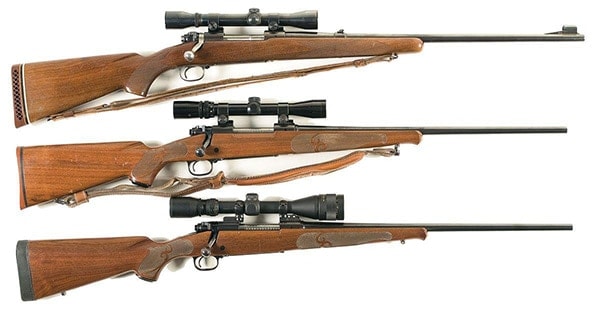 Winchester aficionados count five major series of Model 70s. There was the original pre-World War 2 guns made 1936-41 that were offered in either 24-26-inch Standard or 20-inch Carbine varieties. The company switched to making M1 Garand and M1 Carbines during the war then switched into its Transitional series that lasted from 1946-48. Then came the third series, the golden era of the Model 70, comprised of guns made from 1949-63.

The 600,000 or so rifles made in this fifteen year period included the iconic lightweight 7-pound Featherweight, the bruising Alaskan (.338/375 H&H caliber) and Super Grade African (.458 Magnum), 30.06-caliber National Match guns, the .300 H&H Bull gun with its huge 28-inch heavy barrel, a Target model, a Varmint Model…and we lost count.

The fourth series of guns were made after 1963 by Winchester (and after 1981 by US Repeating Arms using the Winchester branding). To save money they redesigned the extractor, inner workings, and safety of the ‘Pre-64’ Model 70, then cut corners by pressing the checkering in the wood stocks rather than cutting it, using stamped alloy parts, and hammer forging rather than hand cutting barrels. Gone was the mighty milled one-piece bolt, replaced by a funky two-piece design. They had the nerve to call their new gun “The Classic” series and sold it until they closed the doors at New Haven in 2006. The triggers on these guns were so disliked that Timney made a fortune selling $140 drop-in replacements for them over the years. This is why people go ga-ga for Pre-64 rifles.

The final series, (and current) Model 70 are made by FN USA (the Herstal Group has owned USRA since 2007) at their plant in Columbia, South Carolina. These guns have been modeled after the old Pre-64 Winnies with their Mauser style extractor and have adjustable MOA (sorry Timney) triggers. They are made on the same machines as FN’s M249 machine guns for the Army, if you have any further questions about reliability. Winchester currently markets at least twenty different subvariants.

The Winnie goes to war

When the Vietnam conflict grew smoking hot in the mid-1960s, the Marines found themselves short of dedicated sniper rifles. The only precision rifles they had on hand were WWII/Korean war-era M1s and M1903 Springfields that were long in the tooth. Other than that, Marine marksmen used some competition rifles at DCM national matches. These competition guns? Winchester Model 70s.

They were all Pre-64 commercial guns of the National Match or Bull barrel varieties chambered in 30.06 Springfield. Marine RTE armorers added some WWII vintage Unertl 8x scopes to these wood-stocked target rifles. This was ironic, as the Winchester had been used as a training rifle for an earlier generation of snipers during World War 2. Coupled with Lake City Match ammo, these guns were rushed into the hands of Marines in Vietnam.  The US Army did the same thing with a number of National Match Model 70s they had in the racks.

Argueably the most famous sniper of that war, US Marine Gunnery Sgt Carlos Hathcock used a Winchester Model 70 on his first tour with renowned success. The legendary shot in which the Gunny took out a NVA sniper straight through the scope tube of a Mosin-Nagant 91/30 was with this gun.

As a tribute the effectiveness of these Pre-64 actions, FN uses essentially, the same design on their SPR/PBR series of military and police sniper rifles today.

Seemingly each year the list of calibers was tweaked as new ones were added while others were put out to pasture. Still, if you had enough cash and the address to New Haven, you could special request a rifle in such exotic chamberings as 7.65mm Argentine (who doesn’t want that?) or 9x57mm Mauser. In our research of old catalogs between 1936 and today, no less than 40 different calibers have been offered in one flavor of Model 70 or another.

The collectors market on these guns forever and always will be geared to those first three series of famous Pre-64 rifles. These things can bring real money. About your safest bet is a Standard Grade 30.06 caliber Pre-64 made after World War 2, as you can luck into these for a gentle $600 in beaten but shootable condition. The rarer the variant, the stranger the caliber, and any extras like stainless steel, short (or long) barrels, all jump the price of these classic guns faster than a knife fight in a phone booth. For instance, a Pre-64 Model 70 Super Grade African in .458 Win with the correct jeweled bolt and rust blued barrel can ask $8K. Others variants are worth even more. Needless to say, if you go four figures for Winnie M70, be sure of what you are buying as fakery abounds.

Gratefully, the USRA series rifles are more affordable and still make great shooters. Standard models in popular calibers can be had for $400-$600 with the lower end of that being big-box special rifles with thin black composite stocks. Versions that are more exotic of course, run more, but be sure you aren’t paying for what you think is an older gun. Homestead Firearms has a neat model computer online to help you figure out what you have. We know that it sounds like we bashed the USRA guns, but in truth, they really aren’t that bad, they are just sandwiched between the superb Pre-64s and the vastly improved FN guns of today.

It seems, with 75 years of history behind it, the last Winchester Model 70 is still far from being born.