Can you shoulder an AR pistol? The ATF say 'Yes' 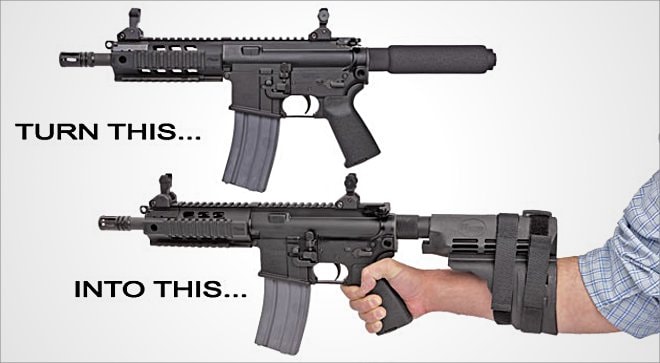 Can you shoulder an AR pistol? That’s the question everyone has asked following the introduction of the SIG pistol brace, a device that allows shooters to strap an AR pistol to their arm for increased stability while shooting one-handed.

The arm brace was developed specifically for shooters with disabilities, soldiers and veterans specifically, although some users have reported a potentially serious flaw that allows people to use it like a padded rubber buttstock.

SIG includes an ATF letter with every arm brace that states that the device is not a buttstock and using in conjunction with a rifle-based pistol does not make it an SBR. But that left users asking the question, “If the SB-15 is used as a buttstock, is that illegal?”

Unlawful possession of an SBR is a federal offense and even possessing the materials to create one is a crime, it constitutes “constructive intent.”

Which is why Sgt. Joe Bradley of the Greenwood, Colorado, police department contacted the ATF. Bradley wanted to know if “firing an AR-15-type pistol from the shoulder … would cause the pistol to be reclassified as a Short-Barreled Rifle.” The ATF’s Firearms Technology Branch responded clearly. You can shoulder an AR pistol all day long; using a SB-15 or similar device does like a buttstock does not make a rifle-based pistol into an SBR. 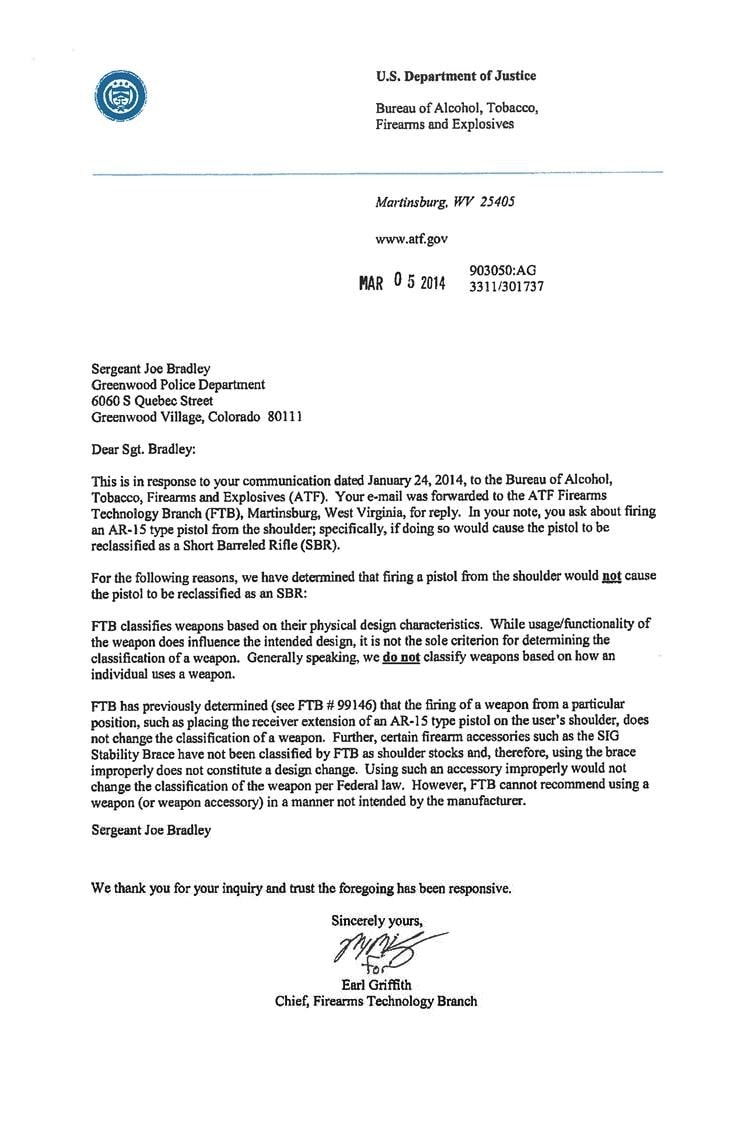 “For the following reasons, we have determined that firing a pistol from the shoulder would not cause the pistol to be reclassified as an SBR,” the ATF writes in its reply.

“[The] FTB classifies weapons based on their physical design characteristics. While usage/functionality of the weapon does influence the intended design, it is not the sole criterion for determining the classification of a weapon. Generally speaking, we do not classify weapons based on how an individual uses a weapon.

“[The] FTB has previously determined that the firing of a weapon from a particular position, such as placing the receiver extension of an AR-15-type pistol on the user’s shoulder, does not change the classification of a weapon. Further, certain firearm accessories such as the SIG Stability Brace have not been classified by [the] FTB as shoulder stocks and, therefore, using the brace improperly does not constitute a design change.”

And that is that.

Using a firearm not as intended does not constitute manufacturing a different class of weapon. So sayeth the ATF, on official stationary and everything.

Users should have no fear of shouldering a firearm equipped with an arm brace, at least for the foreseeable future.

This is the very same criteria that the ATF used to classify the Innovative Enterprises muzzle brake as a silencer, in a case that was recently thrown out of court.

In that decision, a federal judge ruled that the ATF has no grounds to regulate firearms based solely on their “physical design characteristics,” and that the agency must use some real-world, functional standards in its decision-making.

It seems unlikely that the ruling will affect the SB-15 and other arm braces, for a couple of reasons. First, the ATF has decided to approve braces, they aren’t trying to restrict them, so there’s no company trying to prevent the ATF from regulating them. And secondly, they really are arm braces.

The SB-15 at its core is a medical device, designed to make it possible for one-handed users to easily point an AR-15 pistol. A percentage of each sale is donated to Honored American Veterans Afield; it does its job and it does its job well.

However, the Firearms Technology Branch of the ATF has stated on-record, the “FTB cannot recommend using a weapon (or weapon accessory) in a manner not intended by the manufacturer.”