The Colt Woodsman: A most pined after plinking pistol (VIDEO) 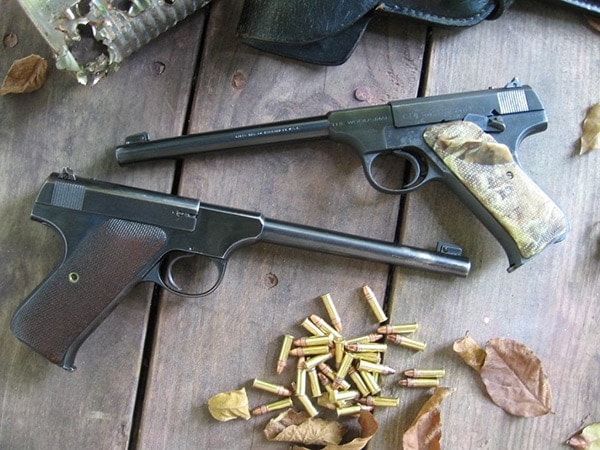 The Colt Woodsman, a tin can assassin.

Today there are dozens of .22LR target pistols out there on the market. You can walk into any shop in any state and find any number of Ruger, Browning, Beretta, or Walther pistols among others who all promise to scratch that rimfire itch. But nearly a hundred years ago, Colt got this concept out and perfect and before anyone else did and it came in the form of a work of art we know today as the Woodsman—quite possibly the handgun shooters most want to see made again… 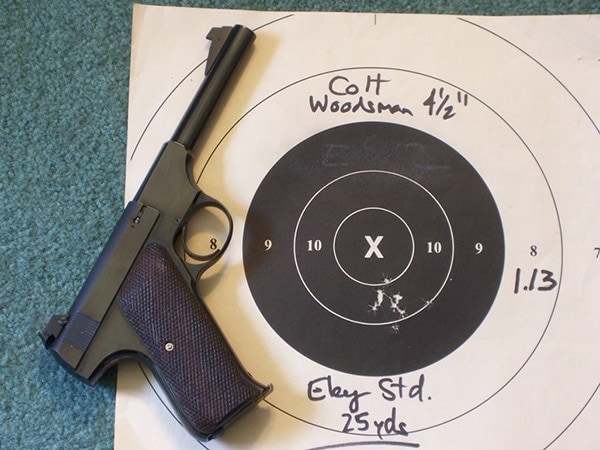 The Woodsman is considered by many to be the most accurate .22 caliber production pistol ever made, a concept that started in the drawing room.

At the dawn of the 20th Century, Colt Firearms had a master artisan and visionary on their payroll. His name: John Moses Browning. In the first two decades of the century, Browning designed for the company their Model 1900, 1902, M1903/1908 Pocket Hammerless, Vest Pocket pistol, and that most famous of Colt handguns—the M1911 longslide. Odds are, if you wanted a semi-automatic pistol in the US in the 1900s, you had a Colt.

These guns, ranging from .25 to .45ACP were all made for the purpose of self-defense/military and law enforcement use. What the company needed in 1915 to complete the handgun hat trick was a nice rimfire target pistol. 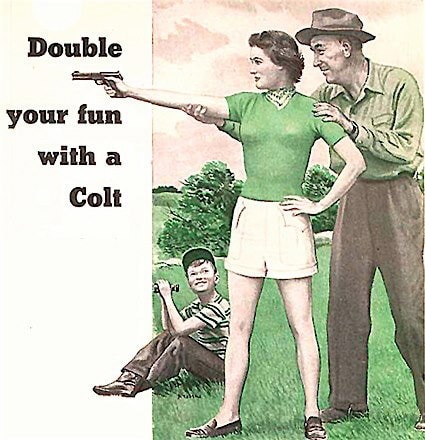 And that is just what Browning came up with.

The new .22 self-loader was an exercise in simplicity. Browning started with a fixed-barrel attached to a strait blowback action. This meant that the barrel was threaded solid to the forged steel frame, which ensured that as long as it was aligned properly in production, it couldn’t be knocked loose in the future.  Atop the back of the frame was a removable cover that held the mainspring housing, striker-style firing pin, and a spring-loaded extractor. 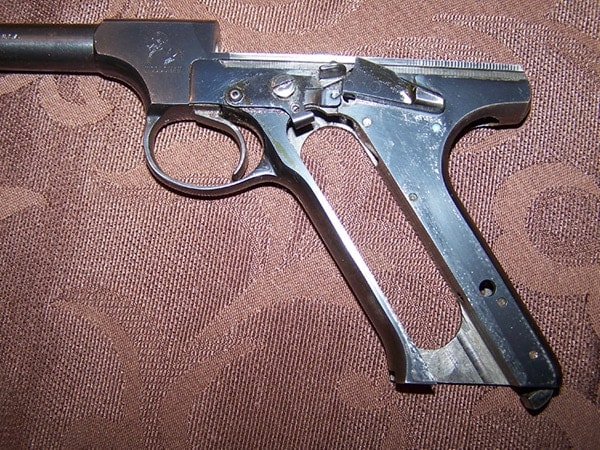 When field-stripped, you see that the barrel itself is an inherent part of the frame, which gives the Woodsman its legendary accuracy. 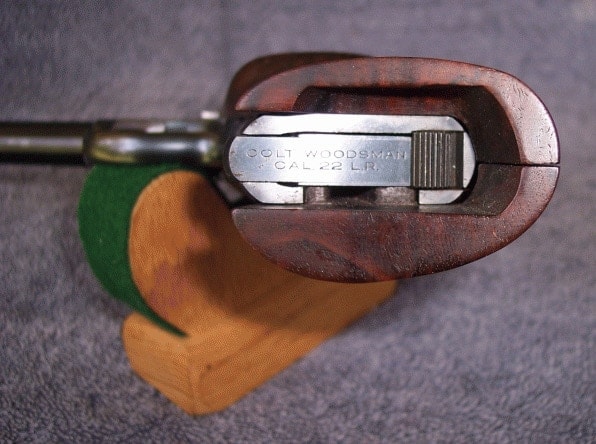 Feeding came from a single-stack 10-shot magazine that inserted into the pistol grip and was held there by a European-style heel release. While it was unlike Browning to do this (he had already designed several semi-auto pistols without this feature, his Colt 1911 for instance), it at least made the gun ambidextrous and easy to load or unload while wearing gloves. The trigger guard was also large enough to accommodate a gloved finger if needed. Since the gun was to be pitched as a farmer/rancher/woodsman’s companion, such allowances were welcome, style points notwithstanding. 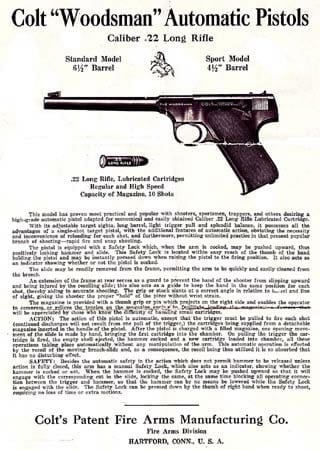 A drift-adjustable rear sight and elevation adjustable front sight was inlet directly into the gun. With a long sight radius over the 6.5-inch pencil-like barrel, these sights helped make the gun exceptionally accurate. A thin trigger with very short travel minimized the possibility of trigger slap in inexperienced shooters, which also helped in the accuracy department.  Checkered walnut grips covered an angled grip similar to the one found on Swiss arms guru Georg Luger’s Parabellum pistol—which was very popular among both military and target shooters at the time.  Overall length was 10.5-inches and total weight with a loaded magazine was less than two pounds. Browning presented his gun to the Colt company who immediately snatched it up and sold it as the unimaginably titled “Colt .22 Automatic Pistol” starting in 1915. 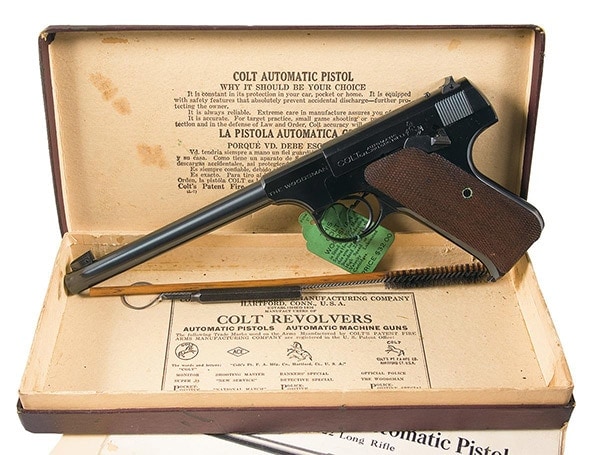 The company sold an estimated 690,000 of these guns in three different variants. The first was a Sport Model with a 4.5-inch round barrel. The second variant was a Match Target Model which had a slab-sided 6.5-inch barrel and an 11-inch overall length. . The third variant was the standard Target Model with a 6 or 6.5-inch skinny barrel. Each of these models came in an assortment of grades, subvariants, and had minor changes and improvements from one another. It was not until 1927 that the “Woodsman” name was added to the model. 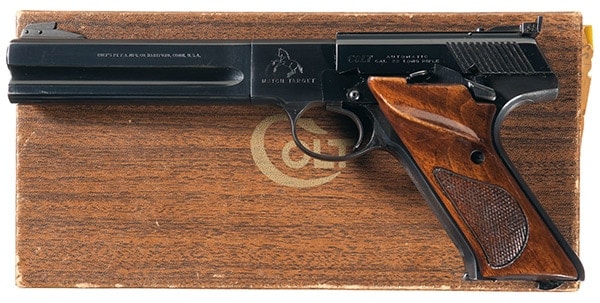 Over the years, the original Browning-designed partridge sights were replaced. This translated into a fixed front sight and an adjustable rear moving forward.  Marketed by Colt as the Accro Sight these would be augmented by Steven or Elliason rear sights on various models but they all still had the same concept. Barrel weights, some sold aftermarket by King, led to the company producing in 1938 the slab-sided Match Target Model of its own. This flat-looking barrel assembly included built-in barrel weights to help eliminate the already negligible muzzle flip in long range shooting. That same year Colt experimented with so-called Elephant ear grips that extended below the pistol itself to help with steadying the pistol. 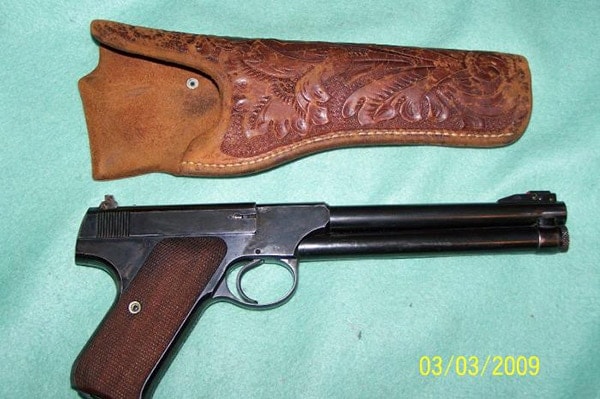 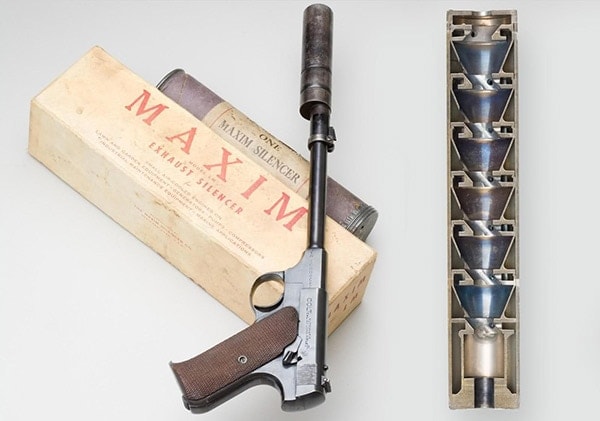 Colt Woodsman with maxim exhaust silencer. These were both sold mail order up until 1934. 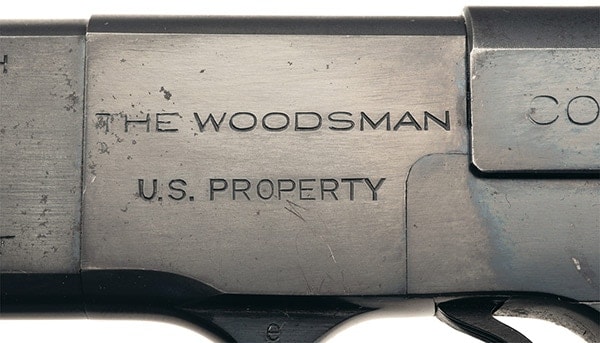 The military ordered 4,000 Match Target Bull’s-eye pistols for training purposes (then as now, it’s still cheaper to shoot 22LR than .45ACP).  Marked with a government cartouche and US markings, these served for decades before they were passed along to the surplus market.

Imitation is the sincerest form of flattery

In continuous production for more than 60 years, these guns set the bar that other .22LR pistols had to meet. Had it not been for the Colt Woodsman, Carl Gustav Swebilius would never have produced the Hi-Standard series of pistols. These guns, which first came out in the 1930s, look, and perform like clones of the Woodsman. Then came the Smith and Wesson Model 41, which looks suspiciously like the slab-sided Woodsman Match Target Model. Finally, Bill Ruger launched his company in 1949 with a .22LR single stack ten-shot magazine pistol, with a fixed skinny barrel and strait blowback action. Truth be told, if there was no Woodsman, the rimfire pistol market could look very different today. 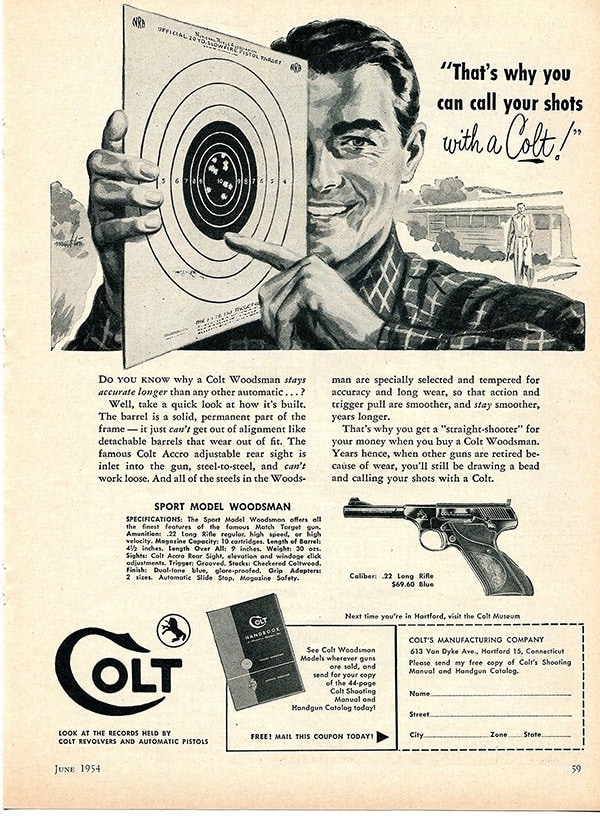 1954 Colt Woodsman ad. These guns dug the foundation for the .22 plinker pistol market we know and love today.

Putting a price on these guns is the utmost in tricky. First, you have to figure out what you are looking at. Woodsmen were made in three distinct issue runs between 1915 and 1977 (although guns were still being made from old parts by Colt as late as 1980). Their adjustable front sights easily spot first issue guns while second issue guns have fixed front sights and a 1911-style magazine release button. If you have a Woodsman with a heel-mounted mag release and fixed front sights, odds are its a third issue. 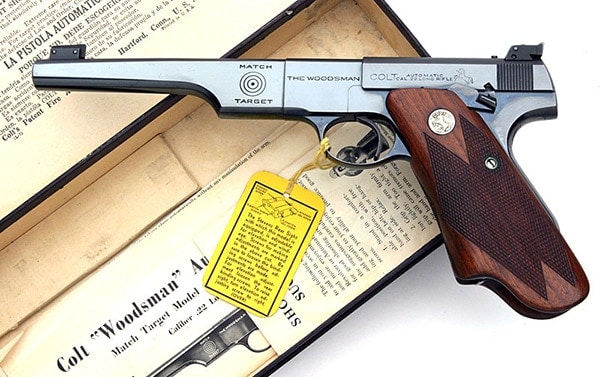 Colt Woodsman, match target model. Pricing any Woodsman can turn into an exercise in research.

You need to get very in depth with the serial numbers (be advised many of the same serial number ranges were repeated) and with exactly what model you have. Know that guns made before World War 2 will all have patent numbers and the dates 1903 and/or 1918 roll marked on the gun. Guns made after the war will not have those patent dates. Also if you have a Colt Woodsman that does not actually say ‘The Woodsman’ on it, and your serial number is less than #34,000, your gun is very collectable. Like over $2000 worth collectable. 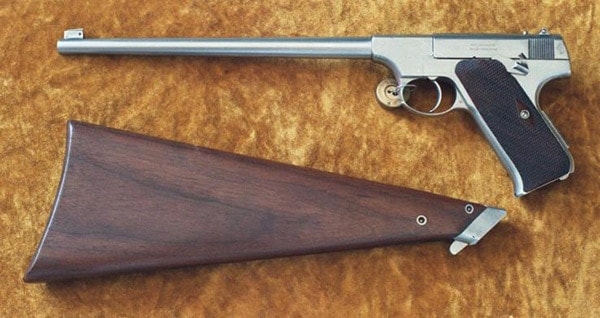 The same can be said for factory engraved guns as there were only a few hundred of these made. First issue ‘US Property” marked guns, showing Army service, can often run well over $2500. Two experimental short rifle models, with a detachable wood stock and 10-inch barrel, were made but the odds of ever getting your hands on one for less than the price of a loaded Porsche are slim. For help with variants, Bob Rayburn has an excellent site all about the Woodsman. 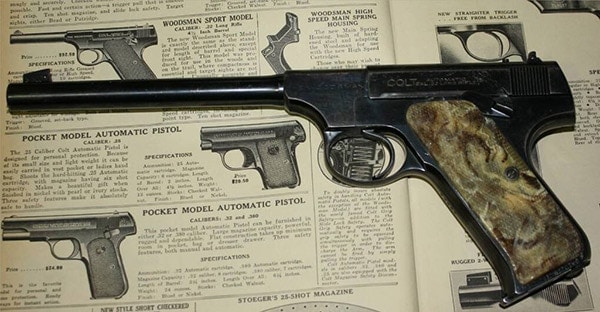 With all that being said, prices for your ‘typical’ shooting grade Colt Woodsman run anywhere from $500-$1000. Moreover, yes, due to the nature of their construction, these guns do often still shoot remarkably well. It seems that barring meteor strikes, those old barrels just refuse to quit or get out of alignment. It may be a good idea to get with the Colt Historian (1-800-962-COLT) to get a letter showing the manufacture date etc. of your gun to help prove its value. This should be mandatory if you think you have an Army or factory engraved gun. As a note of warning, First Issue Woodsmen with serial numbers #83,790 shouldn’t be fired with high-velocity .22LR ammo unless their mainspring housing has been changed out. 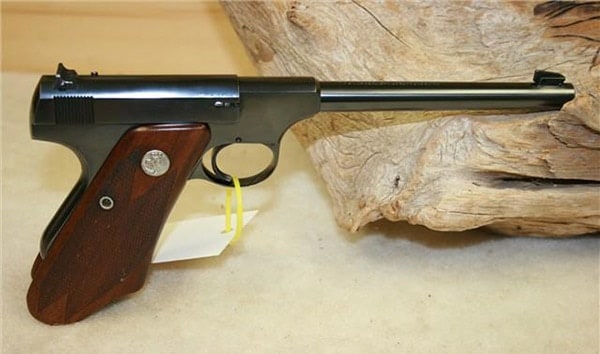 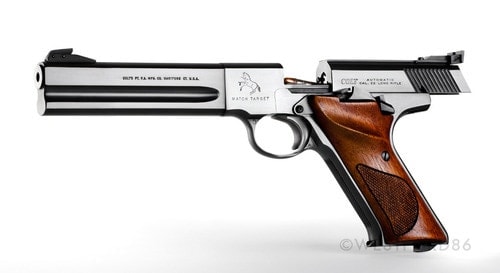 An elegant Colt Woodsman shooter. A safe investment for any gun nut.

If you have a newer gun (third issue guns were made between 1955-1977ish) that isn’t just absolutely beautiful, in the original box, take that bad boy to the range with standard velocity ammo, and get your money’s worth out of it. Just be advised that correct Colt-marked mags run about $100 on the market and the supply of internal parts is shrinking everyday—so buy some now for future use.

If it’s older than that, or in excellent condition, preserve it as the collectable it is and list who gets it in your will.