The Central Intelligence Agency (CIA) was born on September 18, 1947, out of the ashes of the Office of Strategic Services (OSS).

Back during the Vietnam war era, certain Spy vs. Spy characters thought it would be a capital idea if the hard working and oppressed peoples of the world, yearning to throw off the yoke of Communist oppression, had a helping hand.

What better help than a $3 zip gun falling from the sky that the agency could disavow any knowledge of?

Why was it built?

The Central Intelligence Agency (CIA) was born from the ashes of World War 2’s Office of Strategic Services (OSS). The OSS had the mission to set enemy occupied Europe and Asia on fire, tying down German and Japanese forces in the rear. After all, every Nazi soldier busy looking for resistance fighters in occupied France or Belgium was one less on the front line. 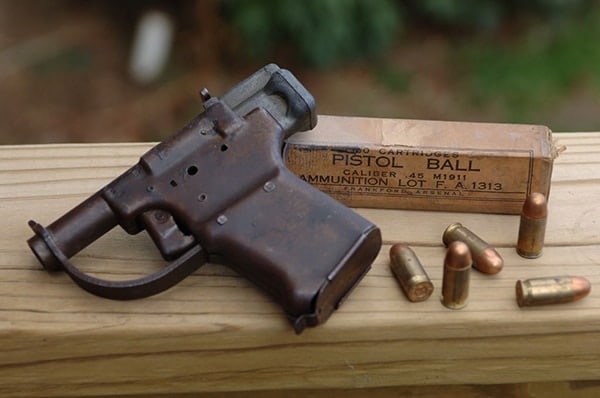 The Liberator pistol was, by most accounts, an effective demoralization weapon against Nazi, Germany. 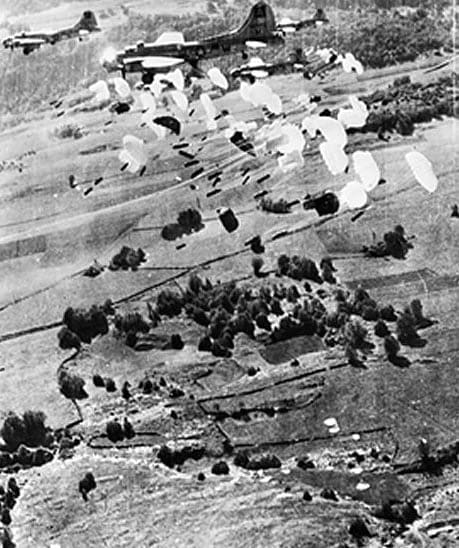 B17 bomber dropping supplies for resistance fighters in WWII.

One of the OSS’s clever little tricks was the FP-45 Liberator pistol. Throwaway guns made by the Guide Lamp Corporation of General Motors Corporation, over a million were produced to arm resistance fighters during the war. It was a simple, single-shot gun that could be fired, preferably in ambush, at an enemy soldier. Once killed, the brave resistance fighter could swipe the bad guy’s weapons and pass the Liberator on to someone else. These guns cost $2.10 a pop and, while not used very much, gave the Axis heartburn knowing they existed.

Well by the early 1960s, the CIA decided that it needed an updated version of the Liberator. The Communists were seen as fast taking over the world and CIA Director Allen Dulles and company were sworn to stop it. A plain Jane throwaway gun that could be made cheap enough to give away, denied if ever found by the bad guys, and still be effective could arm friendlies everywhere from the Ukraine to North Korea.

With the basic concept in mind, the CIA turned, not to a well-known firearms company like Remington or Winchester, but instead to someone far off the radar. 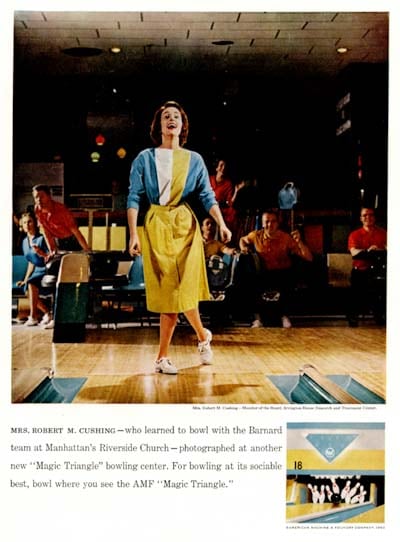 Besides this vanilla weekend gear for the middle class, they also had a lucrative yet low-key weapons concern, made the launching silos for the Titan and Atlas ICBMs, and sold both Pakistan and Iran their first nuclear reactors. One of the company’s hidden gems was engineer Russell J. Moure, who came up with a super simple zip gun for an agency that could neither confirm nor deny its existence. 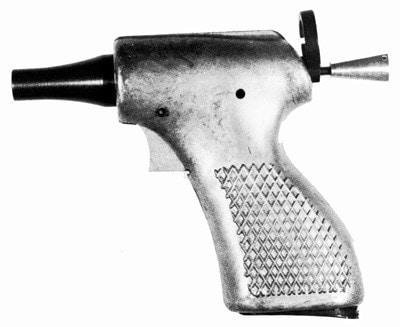 Deer gun, photo 1960s. Note the attachment behind the charging handle. This acted as a crude safety. When fired, it was removed and added to the front barrel as a front sight.

Moure’s gun took advantage of the simple work being done at the time in aluminums and plastics, sketched out a firearm that had a dozen or so components, and came away with the Deer Gun. The name was either AMF’s red herring code word for the project or the CIA’s, stories differ, but it stuck.

The pistol has no action and was loaded simply by unscrewing the 1.8-inch smoothbore barrel from the cast aluminum gun, inserting a live 9x19mm Parabellum round into the breech of it, and screwing it back onto the weapon. Once the round was loaded, the user cocked the cone-shaped charging handle at the rear of the gun, and it was ready to fire after depressing the trigger. Striker fired, the cocking handle was only prevented from accidental discharges if bumped by a plastic ‘horse collar’ that fit between it and the gun. When the gun was ready to fire, the collar was taken out and used as a front sight post. 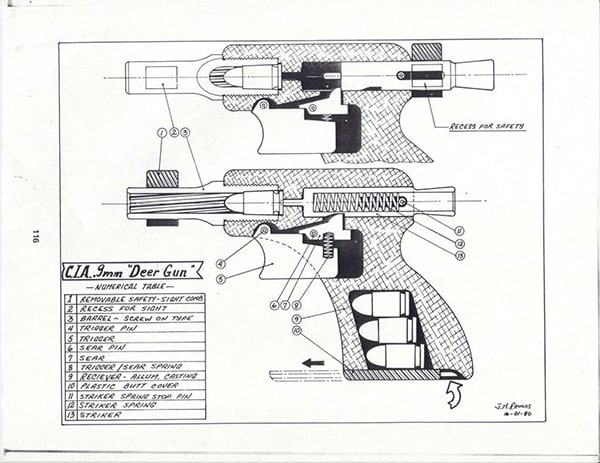 Plans for Deer gun (the strange name is very likely the code name used by either AMF, the CIA or both. 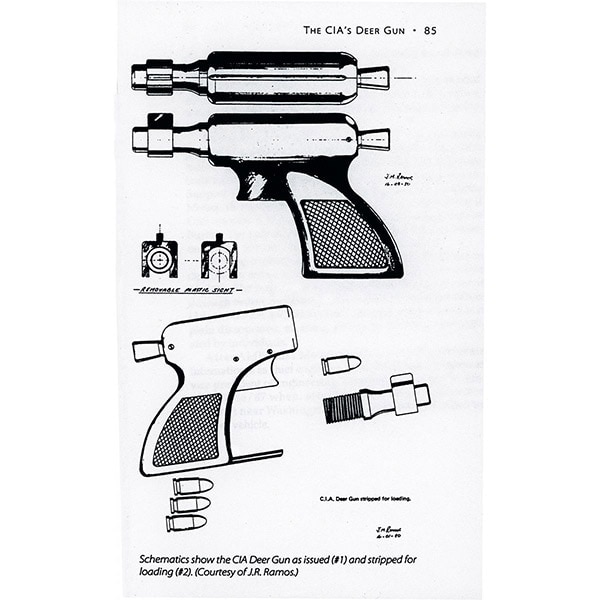 There was no trigger guard, and the entire trigger assembly consisted of but four parts, physically holding and the striker back against the strength of the firing pin spring. Three extra rounds were held in a hollowed out section of the grip that was accessed by a sliding trapdoor on the heel of the gun. A small plastic pushrod could be attached on that heel to punch out a spent casing from the unscrewed barrel after the gun had fired. Overall length when assembled was just five inches, about the same size as a Ruger LCP today. 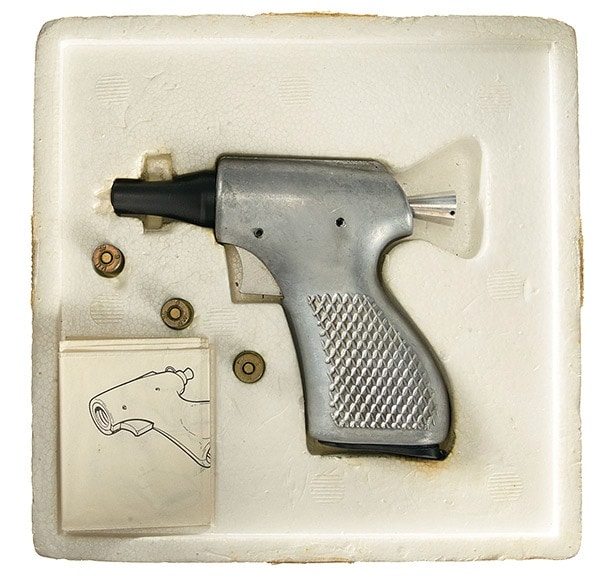 A Deer gun, still beautifully packaged, in its styrofoam drop box with three rounds of 9mm and cartoon instructions still in tow.

The cartoon manual of how to use the Deer gun.

To ensure its safe delivery to the intended freedom fighters, the gun was packaged in a thick Styrofoam clamshell box with cutouts for the Deer Gun, three rounds of ammunition, and a folded cartoon instructions sheet. If dropped from a height, it would survive most impacts. Upon a water landing, the large quantity of Styrofoam would prove buoyant enough for the package to float even with the 12-ounce gun inside.

So that no connection between the gun and the US government could be made, it had no markings, no serial number, and was totally generic. Even the bullets shipped with the Deer Gun were 9mm, a caliber that the US military did not issue at the time. Further, the head stamps on the cases of those rounds were marked not with a NATO symbol, but with ‘9mm 42’, to imply that they were possibly WWII vintage bullets of German, Italian, or some other origin that American. 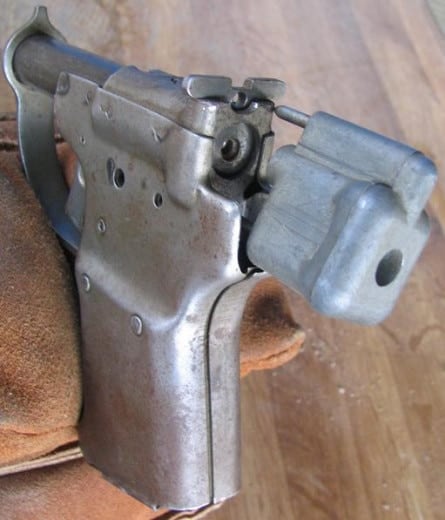 When compared to the Liberator, the Deer Gun was smaller, lighter, used fewer parts (the Liberator amazingly had 23), and was totally deniable. Total cost of the disposable gun in 1963: $3.50. In today’s money, this is about $26. 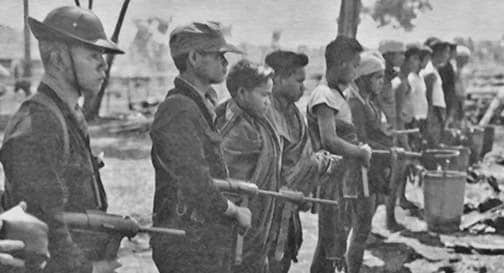 Montagnard Scouts, trained by the CIA. Note they are armed with M3A1 submachine guns, not deer guns.

It is believed that some 1000 of these innocent little popguns were made by AMF for the US government in the early 1960s. Some sources state that as many as 150 were actually shipped to South Vietnam for field testing, but were not distributed to hardy democracy loving insurgents behind the bamboo curtain.

After the Kennedy assassination and the resulting blowback the CIA received, decisions were made to close the program. Disposable zip guns dropping from the sky in Styrofoam boxes suddenly seemed like a bad idea (and one to be mocked by gunnies for years to come). The Deer Gun was toast and the on-hand stocks were demolished.

Think of the rarest unobtanium item in the world. Now think of something even rarer than that. Well my friends, the Deer Gun falls somewhere between the two. Since the gun was supposed to be destroyed, it falls into the same category of US military gun collectables as the Pedersen Device or the Colt Aircrewman. It is believed that fewer than 25 actual Deer Guns escaped the scrappers and these guns, when they surface, are an investment. One recently brought over $22,000 at auction, a 628,500% mark-up on AMF’s original cost for the device. 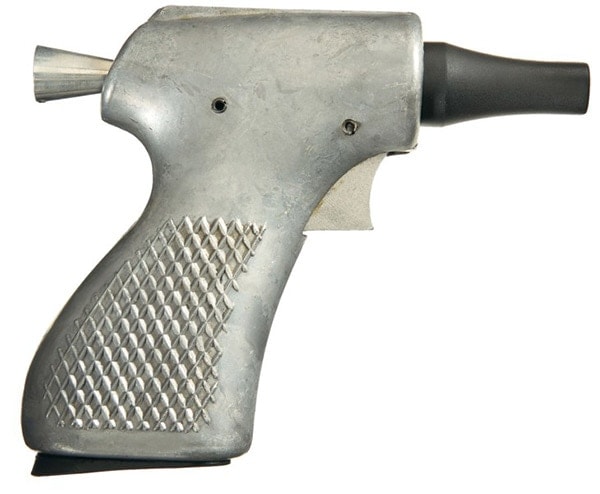 CIA Deer Gun, single shot pistol in 9mm Parabellum, on the collectors market.  Get yours at a 628,500% mark-up.

Not bad for a zip gun.

As for AMF themselves, they got out of the weapons business and by the 1980s only made bowling equipment, which they continue to do. This for most of us is as close as we can get to the Deer gun legacy. With that in mind, think of the great forgotten Deer Gun the next time you take the kids to the old bowling alley.

What a strange world we have.