The RPG-7 Grenade Launcher: Nothing lost in translation 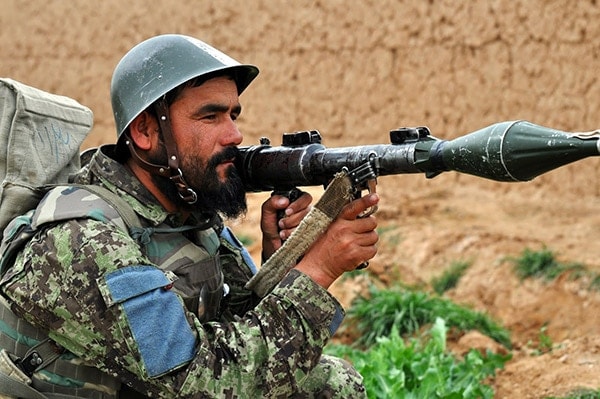 For the past fifty years, you couldn’t officially call a place “sketchy” until an RPG 7 showed up.

If you have ever watched an action movie set after 1960, you have seen one. Heck, if you have ever been to a sandbox, you have encountered one. Its very abbreviation has become synonymous with an entire class of weapons. It is the humble RPG-7, and it’s simple, effective, and cheap.

Why was it developed?

The go-to weapon system of World War Two was the main battle tank: these brutal armored war-engines mounted a main cannon and several machine guns were the key to winning battles. Whoever had the largest number of the best tanks—backed up with enough gas and ammo to keep them going—had the edge in 1940s combat. 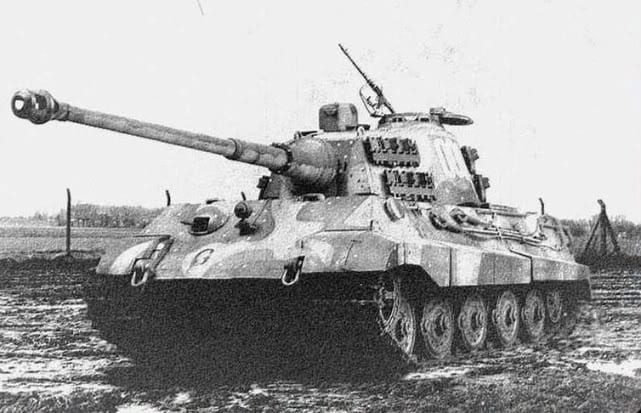 At the beginning of the war, these caterpillar-tracked machines were small, for instance the 1939-era German PzKpfw I was only 13-feet long, weighed 6-tons, and had armor 1-inch thick. A large anti-tank rifle like the Boys .55 or the Lahti 20mm could penetrate this. By 1945, the German Pz.Kpfw VI Tiger tank, at 21-feet long and 62-tons carried up to 4.7-inches of armor plate. Post war tanks like the US M48 and the British Centurion were even better armored. Tanks this big needed something much larger to bring them down than a big rifle and the Soviets knew it.

What they needed was a dedicated anti-tank weapon. 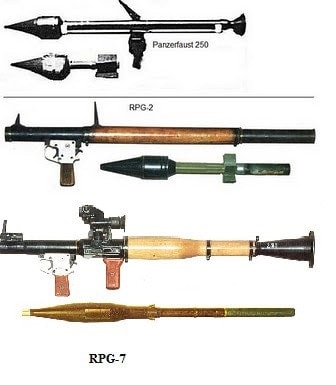 At the tail end of World War Two the Germans were working on a number of ‘super weapons’ ranging from guided missiles and advanced submarines, to experimental jet aircraft that would give them a technological edge over the US-Soviet forces that outnumbered them. One of these innovations was the Panzerfaust 250.

Designed from their earlier Panzerfaust (German for “tank fist”), it used a 149mm shell fired from a simple metal tube in the style of a recoilless rifle. Well, the Germans never got a chance to finish it before the Allies rushed in and the Soviets grabbed all of the plans and ran with them. Tweaking a few minor details, they re-engineered the Pf250 to be the RPG-2 with an 80mm warhead in 1947.  This weapon could penetrate armor of up to 180mm thick. The thing was the RPG-2 and the Pf250 it was designed from fired shells ignited by a percussion-type primer that burned the propellant inside the tube of the launcher and pushed its shell out to the target, making this “recoilless” rifle totally inaccurate.

A new design, the RPG-7, which was started while the RPG-2 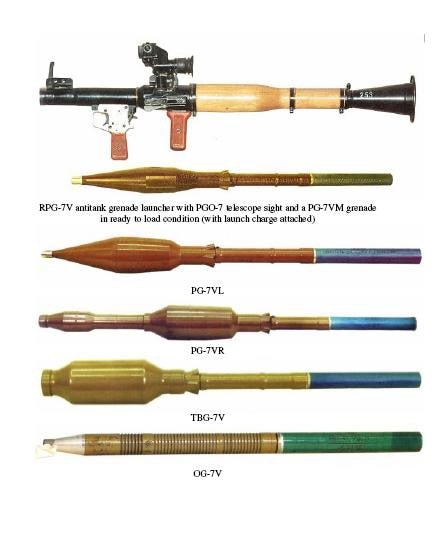 was still new, launched a grenade that ignited a rocket to propel it once it left the tube. A small blackpowder charge held in a cardboard type tube is used to pop the grenade out of the launcher before it ignites its rocket. Because of this, the back blast is less than on the old recoilless rifles but is still dangerous. Unlike in the movies, the RPG-7 sounds more like a shotgun going off than the classic Hollywood ‘pshhhhhhh’ of a rocket.

This design gave it much more range (up to 500-meters rather than 100 of the older non-rocket propelled RPG), better accuracy, and more armor-piercing power. Its single-stage PG-7 grenade could punch through 10-inches of armor, which made Soviet generals less likely to reach for the vodka when confronting high-quality Western tanks.

The launcher was a simple steel tube, 37-inches long and 15.5-pounds in weight, was wrapped in the middle with a wooden sleeve (later plastic) to help insulate the gunner from the heat of the weapon when fired. This gives the RPG-7 a beefier look when compared to the strait tube PF250 and RPG-2 it evolved and allowed for quicker repeat firing and reloading.  A 2.7x telescopic sight was mounted with an emergency set of iron backups. 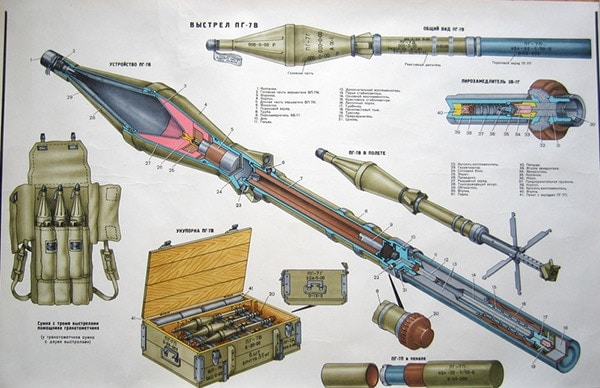 RPG-7. note the three round backpack and grenades. 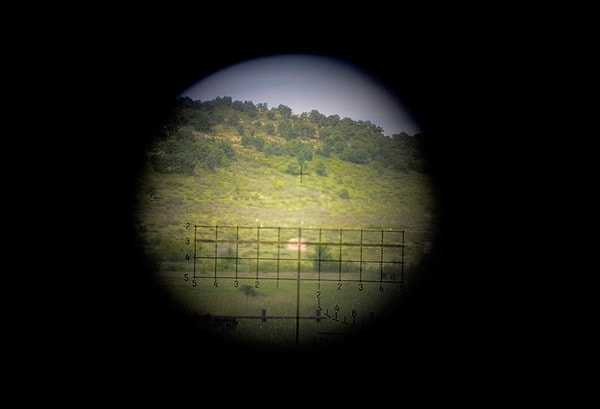 A low-tech weapon, a new user could be instructed on its basic nomenclature and manipulation in an afternoon and then sent out to stalk tanks. It was envisioned that the launcher would be issued to a two-man team of infantrymen, one who would carry the RPG and three 4.85-pound grenades in a rucksack on his back, the other would carry an AK for defense of the pair and another three rocket propelled grenades on his own back.  With a team like this in every squad, the RPG-7 started appearing in Soviet motor rifle regiments in 1961 and hasn’t left since.

A word about the abbreviation is in order. The RPG part of the weapon’s name comes from the Russian phrase ‘Ruchnoy Protivotankovyy Granatomyot’, which means “Hand-held anti-tank grenade launcher.” In the West, particularly English speaking countries, RPG has simply become an abbreviation for “Rocket Propelled Grenade.” An odd case where two abbreviations in two languages are roughly the same. 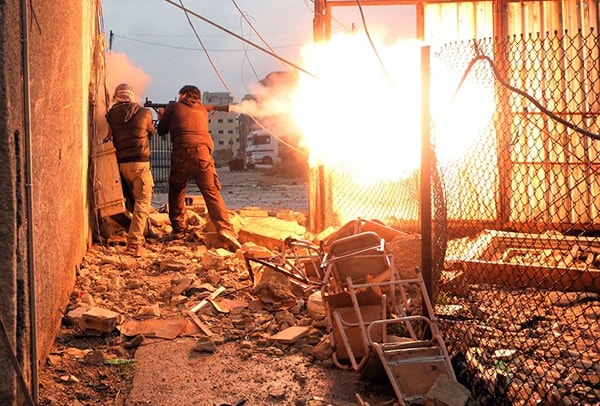 RPG backblast (the rue of many a novice terrorist). 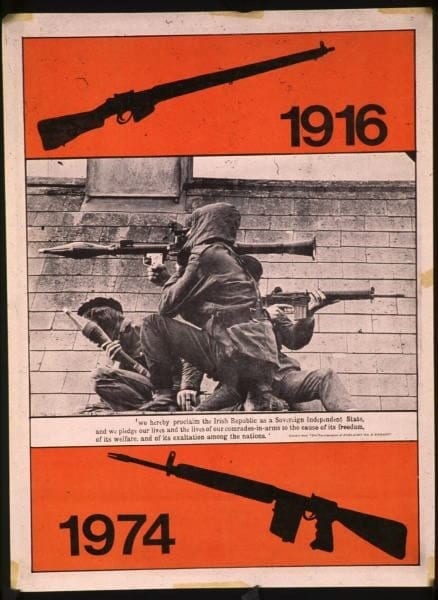 The Russkis were never stingy with their goodies and the RPG-7 has appeared on just about every continent (we haven’t found any penguins in Antarctica armed with any, but then again we haven’t checked the whole place yet).  No less than 40 countries from Albania to Zimbabwe have either bought them or received them as military aide from the Soviets/Russians and they have been in hard combat in just about every war since Kennedy was in office. Not only did US troops have to worry about them in Vietnam, Grenada, Somalia, Bosnia, Iraq, and Afghanistan, but the Brits have also had to dodge them in Northern Ireland for years. Lately in Syria, anti-Assad fighters have been modifying PG-7 rockets to fire in an area-denial mode out past 900 meters.

Many Western fighting men who encountered the RPG-7 in the field gave it a grudging respect. Noted military expert Colonel David Hackworth, one of the most decorated combat officers of the Vietnam era, long advocated for a US-designed version (now called the MK777) of the simple RPG to be brought into service. In a twist of fate, many US Special Forces training teams around the world have found themselves in recent years instructing the locals on how to best use their RPGs. 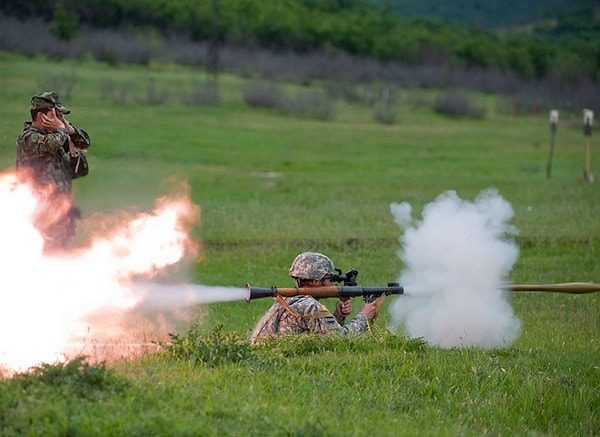 RPG-7 being fired by a US army soldier in Bulgaria. Because troops encounter these so often, training with them is a must. 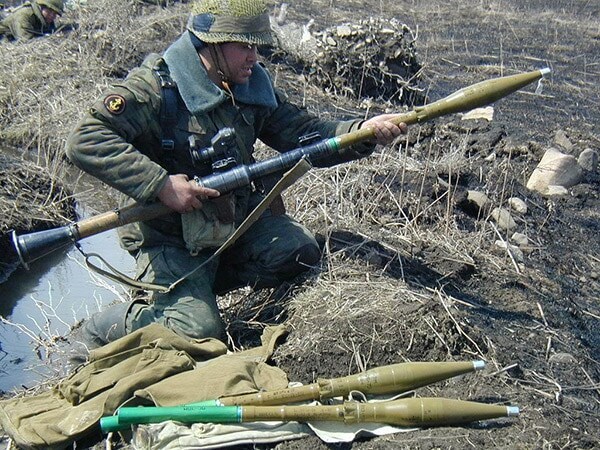 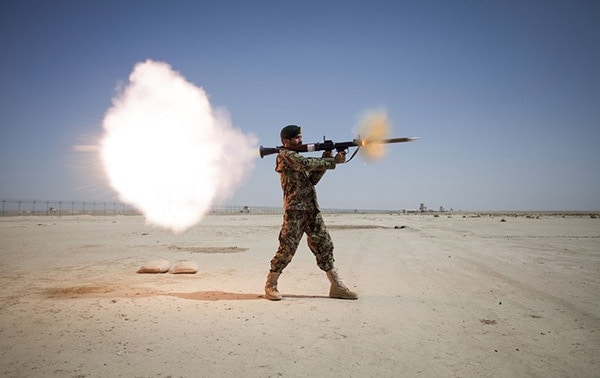 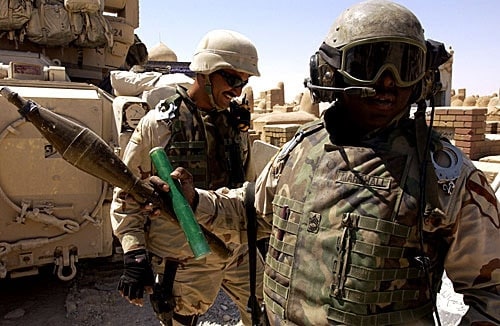 It seems every patrol has “an RPG guy” these days.

The RPG-7 has been in continuous production and service around the world since 1961, lasting more than fifty years as a front line weapon. It has been improved with telescopic sights and other upgrades with the RPG-7D3 now being the current standard. No less than five different grenades have been designed for it ranging from the 1960s classic PG-7 to tandem head HEAT rounds, thermobaric and fragmentation varieties.

The Soviet and later Russian military has tried to replace it with the smaller and more accurate RPG-16, the RPG-18 (itself a copy of the US M79 66mm LAWS), the RPG-22 (a supped up version of the 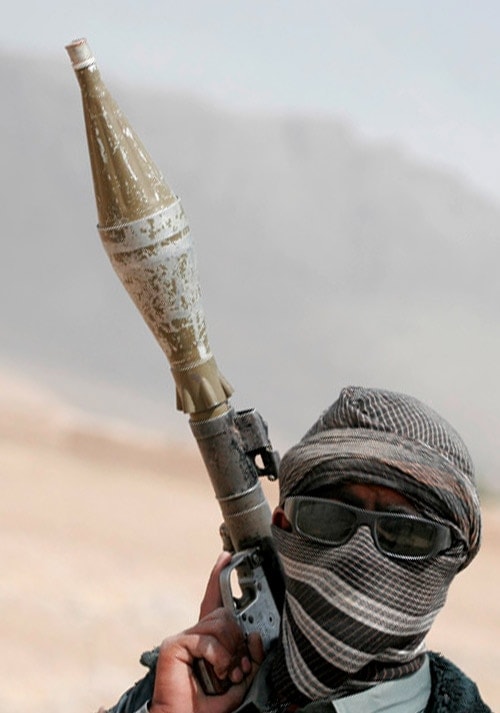 RPG7 in the Middle East.

RPG-18), the tandem-charge warhead RPG-29, the RPG-30, and now the RPG-32, but the tried and true ‘Lucky Number 7’ is still in steady use. The current Russian producer is Bazalt while the Chinese makes the launcher as the Type 69 by Norinco, a household name in dirty deeds done dirt-cheap for decades.

While the going rate in Northern Pakistan for an RPG-7 (with a couple rockets thrown in free) is only about $200, the real thing in the US is somewhat hard to come by legally. Since it’s over .50-caliber, working examples in the states have to be registered under the NFA as Destructive Devices. We haven’t seen any of these pop up at Knob Creek but that doesn’t mean there aren’t any transferable RPGs for sale out there priced at whatever someone with the right tax stamps was willing to pay. 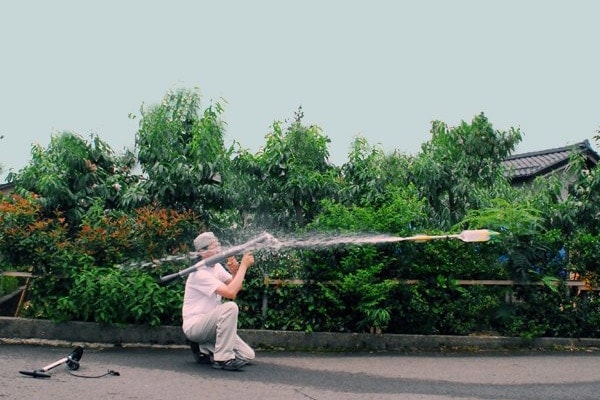 RPG-7 Water rocket launcher (about as close as you’ll get to a working model in the USA).

Deactivated tubes with dummy grenades appear from time to time in online auction sites and drifting around gun shows for $1200-$2000. These non-guns take a whole lot less paperwork and still look great displayed by a surplus Soviet helmet or NVA sandals. 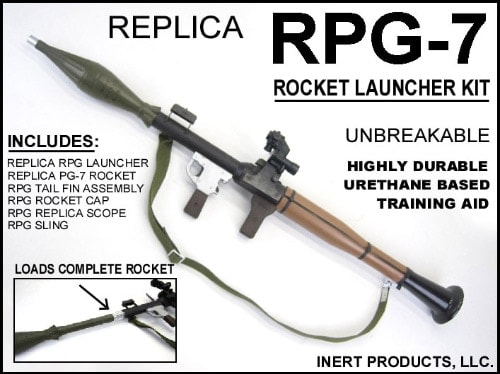 For those who would run around in the woods doing Wolverine imitations or trying to give anti-gunners a heart attack, there are inert reproductions out there that run about a grand. A Japanese company makes a water-powered version capable of punching a plastic grenade out over 100 feet for about five bills.

I guess Colonel Hackworth got his wish, just not how he expected.