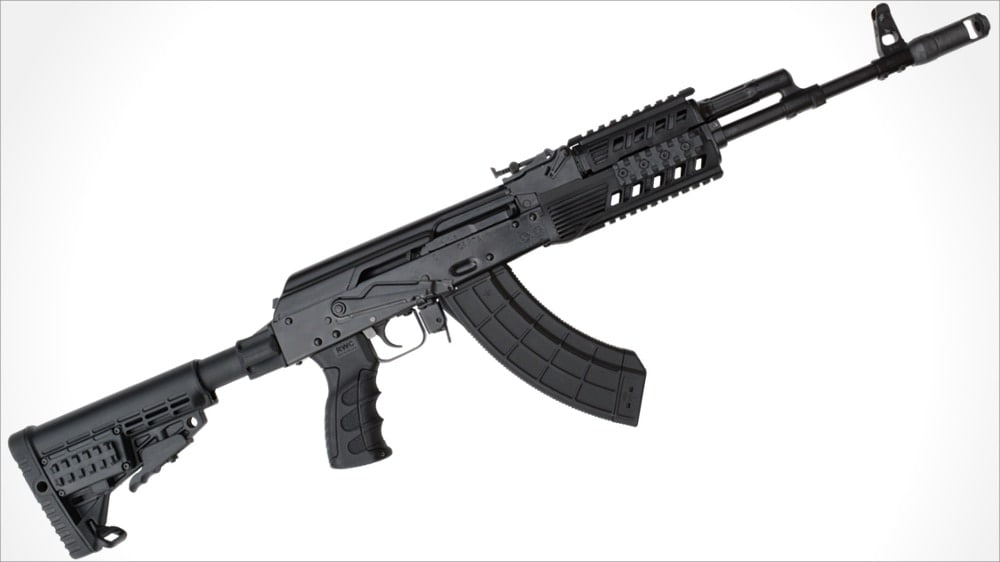 The Kalashnikov Concern, the new face of Russian small arms, is working on an updated series of Saiga rifles that come complete with a full compliment of premium 922(r)-compliant upgrades for the U.S. market. These rifles have been “converted” and have standard controls and a standard trigger group.

They’re taking things one step further than just slapping on some AK-100-style parts and calling it a day. The new IZ132SM takes the popular IZ132 base rifle and builds it into a totally modern tactical rifle that’s good to go with aftermarket and surplus magazines.

The handguard has two fixed rails on top and underneath and can be fit with additional rails on the sides. The design allows the handguard to be removed in the traditional way for cleaning and doesn’t require disassembly like some rail systems.

The 10-position buttstock has a compartment for batteries or other small parts and comes with an extended rubber buttpad for all-day shooting and has multiple loop and quick-detach mounting points for slings. Included is an adjustable cheek piece for use with raised optics.

The pistol grip is enlarged and grooved, a big step up from your traditional AK grips. The grip is also modular and comes with six interchangeable front- and backstraps for an ideal fit.

One final nice touch is the installation of a standard muzzle device. It comes with a modern AK flash hider/brake/compensator.

Chambered for 7.62x39mm, a 5.45x39mm is in the works and will be released later this year. Kalashnikov and their domestic partner, the RWC group, are considering a future model with a full-length flattop rail as well, but the final details remain to be determined.

RWC will continue to offer the base model IZ123 for people who want a “featureless” gun or wish to perform their own conversion.

While it’s shown with a 30-round magazine in the top photo to demonstrate 922(r)-compliance, the rifles will ship with 10-round magazines as is standard for all of their rifles. Magazines are a pretty personal decision in the AK world anyway, and many users have their own preferences.

The suggested retail price for the upgraded rifles is $10,50 and some retailers are already listing it for under $850, making it competitive with other premium AK-pattern rifles and a more appealing alternative to a shop-converted Saiga.

And people won’t forget that this is a genuine Kalashnikov rifle, made in Russia on Mikhail’s machines. While the modern upgrades might not do it for purists, these are the real thing and are sure to make a lot of people happy, especially people who are on the fence about getting an AK-pattern rifle.

For more information head over to the RWC Group and Command Arms websites.