When the balloon went up on what is now known today as the Second World War, the Allies of the US, Great Britain, and the Soviet Union found themselves facing perhaps the best military machine of its day.

Their enemies, that of the Empire of Japan and Nazi Germany, were equipped with some of the most advanced sniper rifles in the world. Moreover, the Allies had to play catch-up fast. 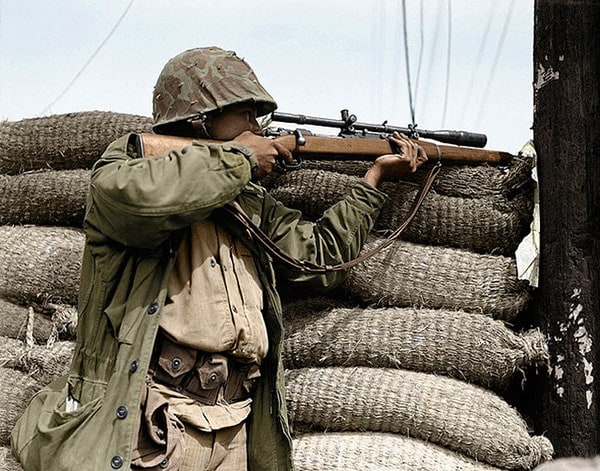 Marine Sniper with a Springfield 1903A1 and Unertl 8-power scope. Note the length and size of the objective lens.

The US came late to the war and was thrown into it with no dedicated sniper program. They did, however, have a disciplined corps of competition shooters who had long practiced at Camp Perry and other military marksmanship events.

Model 1903A4. Check the thin tube of the weaver scope and lack of sites.

The first American snipers were expert riflemen who were pulled from the ranks, handed some specialized equipment then given a couple days practice in its use. Basic tests for snipers were headshots at 200-yards, body shots at 400-yards from a prone position. While most of the US military were issued semi-automatic M1 rifles and carbines, or select-fire Thompson and M3 Grease Guns, the snipers carried bolt-action Springfield rifles due to their inherent accuracy. 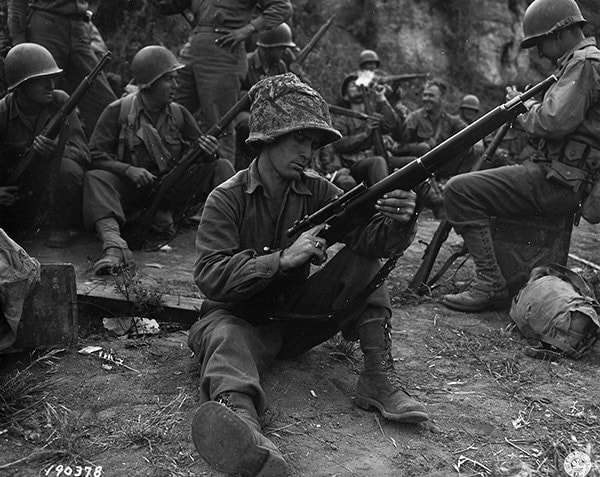 In an army full of M1 Garands, the sniper with a scoped bolt action 1903 stood out in pictures. 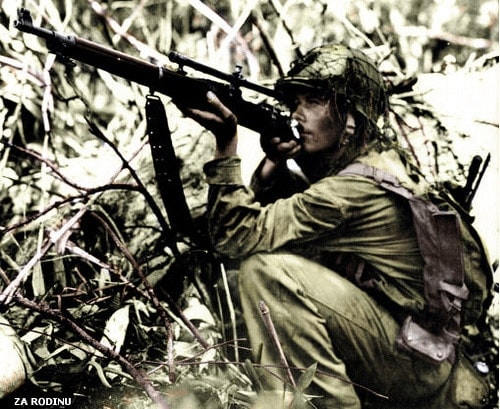 Marine sniper in the Pacific aiming a Springfield 1903A1 with a Winchester A5 scope.

The US Army version was the M1903A4, which was a standard WWII era Remington M1903A3 30.06 made with a milled trigger guard, four-groove barrel, and different bolt handle to accommodate the mounting of a scope. The Army selected the Weaver No 330 scope right off the shelf of local sporting goods stores and, marrying it to a Redfield mount, called it the M73B1 scope. It was 3-power and adjustable, but prevented the Springfield from loading via stripper clips. In addition, if the optics were damaged, the rifle had no back up sights. Nevertheless, US soldiers from North Africa to Italy to Germany used the 1903A4 to good effect against Nazi supermen of all shapes.

The Marines took match grade M1903A1 rifles, made by Springfield in the WWI era, and gave them a custom 8-power Unertl scope on aluminum mounts. Besides this combination, early units used the Springfield with the Winchester A5 scope attached. No matter what optics used, these rifles proved the ultimate counter-sniper to Japanese “hold outs” across the battered islands of the Pacific. 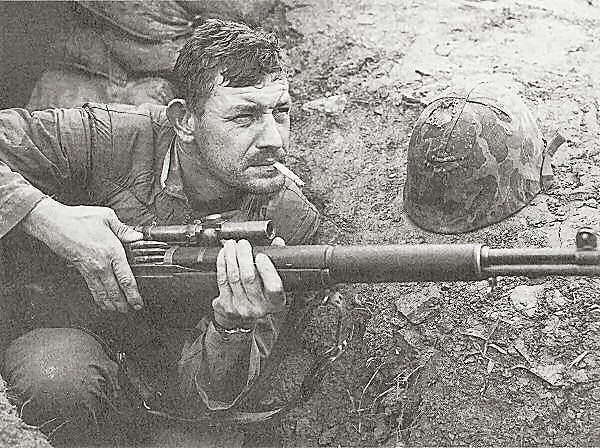 The M1C went on to serve in Korea. Note the offset M82 scope to allow the enbloc clip to load. 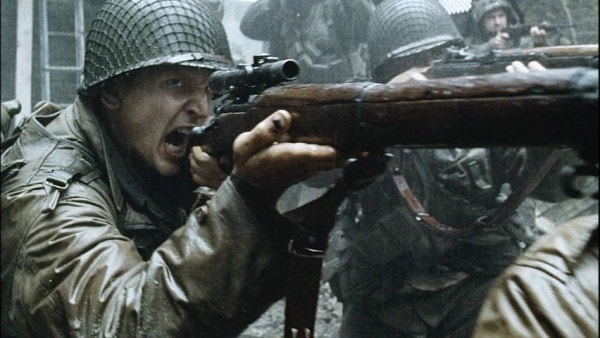 This M1903A4 plays an unforgettable role in Saving Private Ryan.

The M1 Garand was converted late in the war with the addition of a 2.5-power M82 (Lyman Alaskan) scope on an offset mount. Dubbed the M1C, it served late in the war with the US Army in small numbers. Today verified US military WWII-era sniper rifles of any of these above types go for nearly $10,000 if in perfect condition with the optics and accessories. However, the CMP does have comparative deals on base M1C guns (minus the glass) for around $3K.  For about half that you can get a Gibbs Rifle made replica M1903A4 made from a standard A3 model to give you that Saving Private Ryan stand-in on a lower budget. 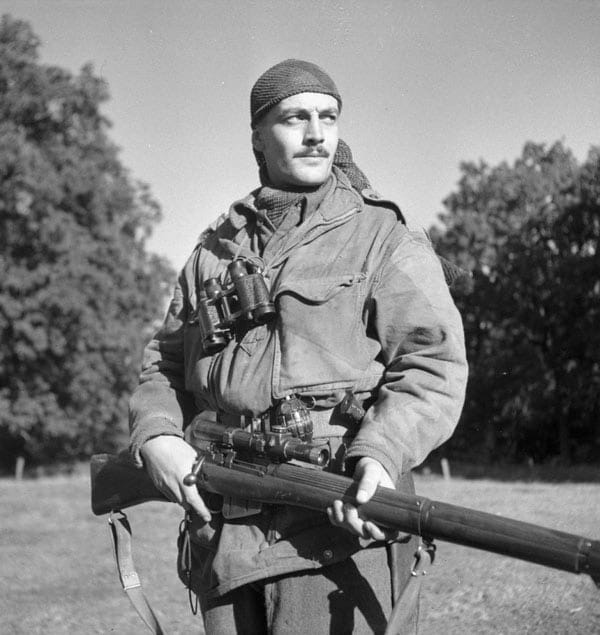 The Brits, much like the Americans, found themselves starting WWII well behind the curve in terms of sniper rifles. However, they learned fast and soon put snipers into the field that rivaled the best the Germans had to offer. Carefully chosen sharpshooters drawn from among soldiers across the army were given two weeks of training, a waterproof camouflaged Denison smock, face veils, and specially equipped .303 caliber Winchester-made Pattern 14 (Lee-Enfield Rifle No.3) rifles with Aldis scopes mounted slightly offset. Some old WWI-era Periscopic Prism M1918 scopes were also used early in the war.

Not terribly happy with their WWI refirbs, by 1942 the British Army had come up with the No.4 Mark I Sniper Rifle. Using the fixed 3x No. 32 scope originally developed to use on the Bren light machine gun when set up to fire from fortresses, this totally new development of the Lee Enfield rifle was hefty at 13.5-pounds, but was one of the most accurate issued rifles of the 20th Century. 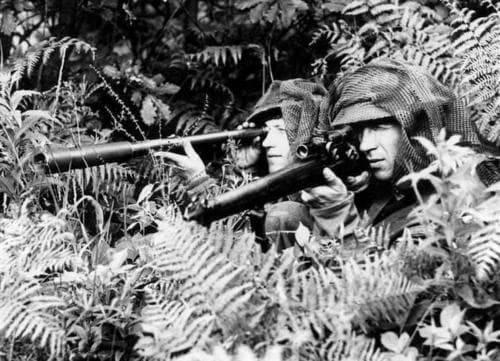 To make the gun as marksman-friendly as possible it had a special cheek piece to align the lens, and a quick detach mount so that the optics could be secured. So that the system could be kept together in one-piece, the rifle, scope, and mount, all with matching serial numbers, were shipped and issued as a unit in a specially made transit chest. British and Commonwealth snipers in WWII and Korea, including Joseph Gregory (who sniped in both World Wars) and Australian Ian Robertson, used them very successfully.

Today nice examples of the No.4 with optics and chest can push $7K.

The Russians took one of the worst lickings of all time during World War 1 and were the first country to throw in the towel, walking away from the conflict after losing some four million soldiers. One of the main reasons for this was inadequate small arms numbers, training, and practice.

The Mosin 91/30 with the distinctive PU scope is the classic Soviet sniper rifle. 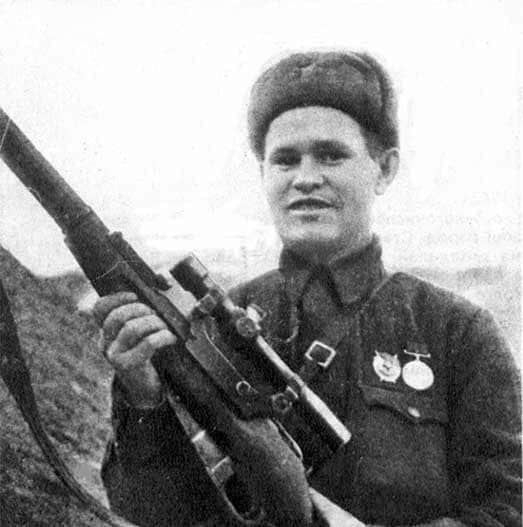 During the 1930s, the Soviets made an effort to correct the mistakes of the previous generation by starting Osoaviakhim rifle programs, in which youth were trained in basic long-range marksmanship across the country.

During this time, the Mosin 91/30, a shortened version of the WWI-era M91 Mosin was developed. After encountering Finnish snipers in the 1939 Winter War, the Soviets made dedicated sniper rifles.  Coupled with a 4-power PE scope, or a more popular 3.5-power stubby PU scope, match grade 91/30s were passed around the Soviet Army in great numbers by the time Hitler came a-calling a couple years later.

When the war started in 1941, Soviet citizens of all walks of life became some of the best snipers in history with these rifles. A wolf hunter from the Ural Mountains, Russia’s version of the Rockies, by the name of Vasily Zaytsev took more than 400 Germans out of the war with well-placed shots. A female student and prewar civilian expert shooter competitor, Lyudmila Pavlichenko, stacked up another 309. In all 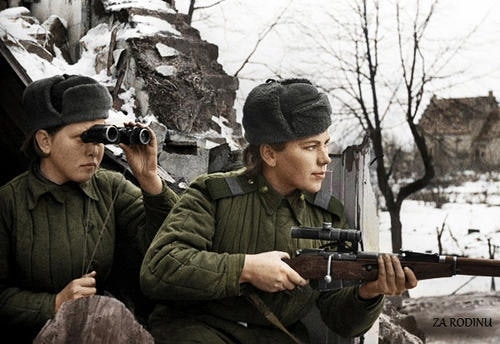 The Soviets used more than 2000 female snipers in WW2.

the Soviets had no less than 80 snipers who each chalked up 100 or more confirmed kills. Most of them with a scoped Mosin although a few used a scoped Tokarev Model 1940 semi-auto rifle with mixed results.

Gives you newfound respect for one of these ‘bargain’ guns. In recent years these WWII vintage 7.62x54R weapons, with (sometimes reproduction) optics have been imported with prices ranging from $400-$2000 depending on authenticity.

Still, you never know when the enemy will be at the gates.