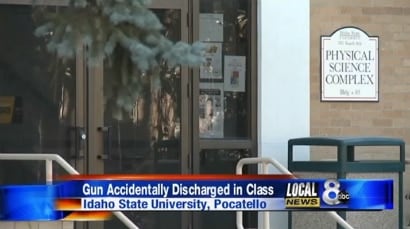 The professor was not badly injured and was released fro the hospital after being treated. (Photo: ABC 8)

An Idaho State University professor accidentally shot himself in the foot with his concealed weapon Tuesday, just two months after the state passed a law making it legal for him to carry a gun on campus, local media reported.

A student said the accidental discharge occurred during class in the physical science building at about 4 p.m., ABC 8 reported.

The professor wasn’t severely injured after discharging the small-caliber handgun in is pocket. He was treated at a local hospital and released.

No charges have been filed on the professor, whose name has not been released.

“At this point it is believed to be an isolated incident,” said Adrienne King, ISU marketing and communications director. “We don’t have any reason to believe students or anybody else in our Bengal community has any reason to be concerned.”