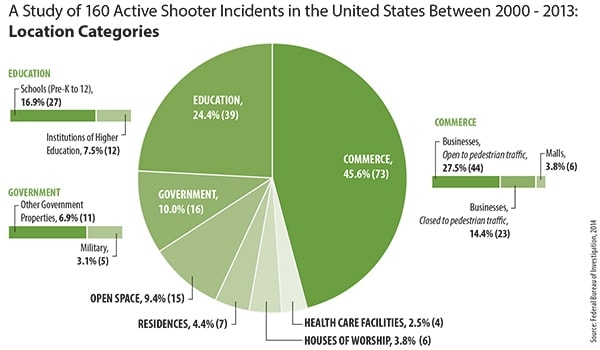 The Federal Bureau of Investigation released a study Wednesday looking at data from 160 active shooter incidents that occurred between 2000 and 2013. The study will help law enforcement and other first responders better handle these dangerous events, the FBI said.

According to the study, an average of 11.4 incidents occurred annually and increased during the research period. Some 486 people were killed and 557 wounded, excluding the shooters themselves. A majority of the shootings, 73, occurred in places of commerce open to pedestrian traffic. Some 39 shootings occurred in places of education — 27 at pre-kindergarten to 12 grade facilities and 12 at higher learning institutions. Government facilities accounted for 16 of the shootings, 5 of those were on military properties. The remaining shootings of the 160 documented occurred with less frequency in open spaces, residences, houses of worship and he alt care facilities.

The team identified 160 events where individuals actively engaged in killing or attempted killing of people in populated areas that weren’t gang or drug related.

The study “demonstrates the need not only for enhanced preparation on the part of law enforcement and other first responders, but also for civilians to be engaged in discussions and training on decisions they’d have to make in an active shooter situation,” said Special Agent Katherine Schweit, who heads the FBI’s Active Shooter Initiative.