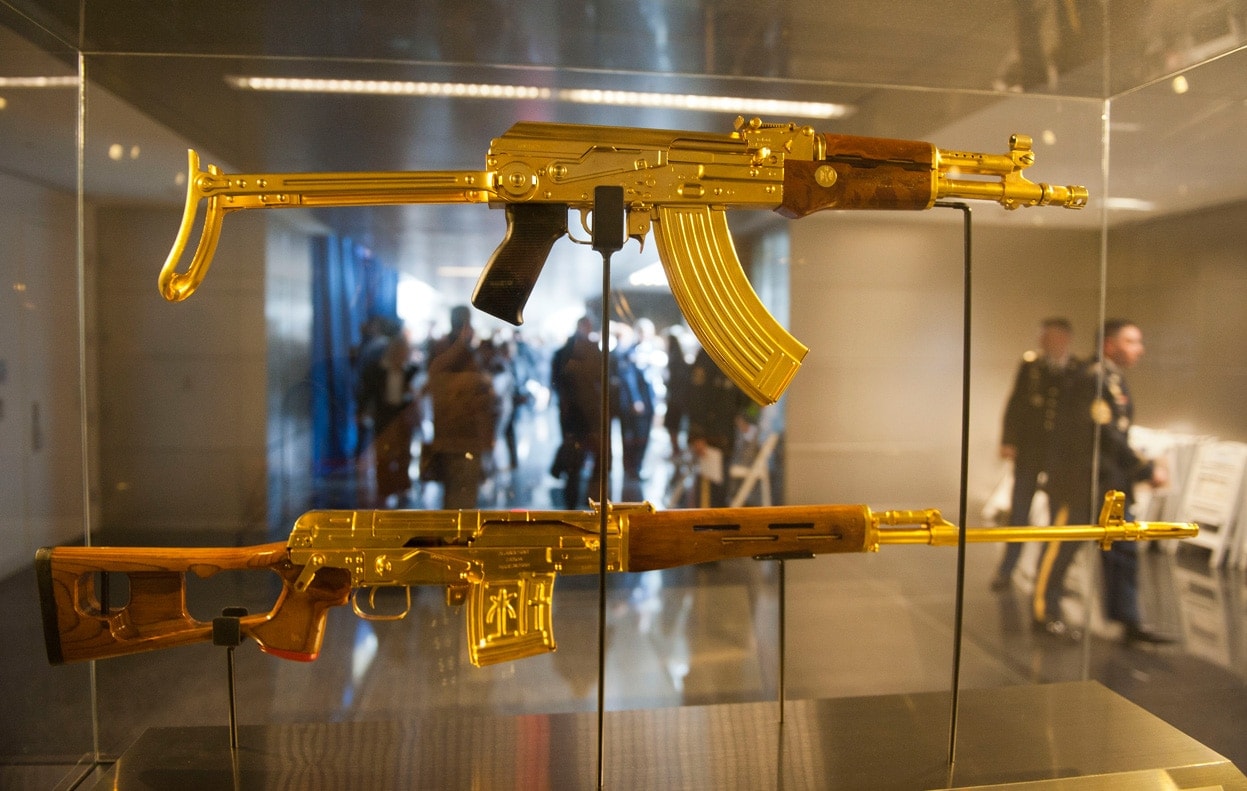 Following the 2003 invasion of Iraq, a number of guns owned by Saddam Hussein and his family such as this gold-plated Tabuk AK-47 variant and SVD rifle on display at the Defense Intelligence Agency in Washington, were captured. (Photo: Cliff Owen/AP )

Two men have been indicted this week on charges of conspiracy to transport stolen weapons, connected to the sale of seven guns believed to be owned by the family of the late dictator of Iraq, Saddam Hussein.

The men, David Phillip Ryan, 50, of Miami, and Carlos Quirola-Ordonez, 57, of New Jersey, are believed by the federal government to have attempted over a four-month period in 2012 to sell a cache of guns smuggled out of Iraq. The firearms, a mixture of exotic shotguns and handguns, was understood to be stolen from the family of Saddam Hussein following the U.S. invasion of Iraq and obtained by Ryan who enlisted Quirola-Ordonez and two others in an attempt to sell the guns for between $250,000 and $350,000. The plan came apart when the buyers turned out to be undercover federal agents working with Homeland Security Investigations and the Bureau of Alcohol Tobacco and Firearms.

United States Attorney Paul J. Fishman explained in the indictment, handed down Friday by the U.S. District Court for the District of New Jersey , that the defendants explicitly knew the guns were in the country illegally, as they told an undercover agent, “They can be auctioned, but just not in the United States…we’re the only ones who’ve passed a law against it.”

The group believed the guns to be worth well over $1 million if they were eligible to be sold at public auction, however, due to their illegal import they were only asking about a third of that. In the end, a price of $160,000 was agreed upon.

According to court documents, Ryan, a former lawyer who had possession of the guns, mailed the firearms to Quirola-Ordonez, also known as Julio Antonio Gonzalez, in New Jersey who along with two others were attempting to find buyers. Ryan then flew to New York in July 2012 to close the deal and federal agents sprung their trap, seizing the guns and arresting the ring.

The guns, none of which has import marks as required, included:

One U.S.-made Coonan Arms .357 Magnum semi-auto pistol with a nickel finish and gold inlay. The Coonan has a medallion “QS” on left side grip, believed to be the initials of Qusay Saddam Hussein al-Tikriti, the second son of former Iraqi President Saddam Hussein.

One Llama .45ACP semi-auto with gold leaf and gold inlays, also with a “QS” engraving.

Since the 2012 arrest, two other suspects, Karl Sauer of Pittsburg and Howard Blumenthal of New Jersey, have plead guilty to charges connected to the case.

In October 2012, the Iraqi Ambassador to the U.S., Jabir Habeb, expressed the view of their government that the firearms recovered during the course of the investigation were the property of Iraq and were removed from the county without authority.

Former Saddam and company guns have been in the news often in the past decade.

Although a number of Hussein family weapons are on display on military installations, museums and even presidential libraries around the world, others have been seized from private owners not authorized to have them and returned to Iraq by customs authorities. Earlier this year a Marine accused of smuggling a chrome-plated AK believed to be a Hussein gun saw his conviction overturned on appeal after it was revealed he was framed.

However, if the arms were brought into the country legally, there is a proven market for them with collectors. In 2013, a pair of Saddam family guns brought back to the country by the CIA and given as an honorarium to a former employee was put up for auction with an estimated value of $25,000.

A court date for Ryan and Quirola-Ordonez has not been set.