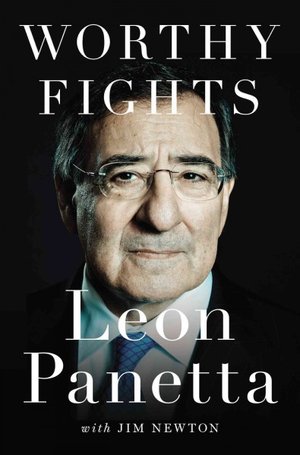 In a book released this week, a former CIA director and defense secretary said that the body of international terrorist leader Osama bin Laden was sent to the deep with the aid of some 300 pounds of chains.

The revelation comes from “Worthy Fights: A Memoir of Leadership in War and Peace,” the latest work by Leon Panetta, who headed the spy agency under President Obama from 2009 to 2011.

Bin Laden was shot and killed inside a private residential compound in Abbottabad, Pakistan, by members of the U.S. military and CIA on May 2, 2011.

According to reports at the time bin Laden’s body was flown from Pakistan to the waiting aircraft carrier USS Carl Vinson. There it was subjected to Muslim funerary rites before a burial at sea in an undisclosed location. Panetta’s book, released now three years after the fact, sheds more light on the terrorist’s final interment.

“Bin Laden’s body was prepared for burial according to Muslim traditions, draped in a white shroud, given final prayers in Arabic, and then placed inside a heavy black bag,” writes Panetta in his book as related by the Times of India.

“Three hundred pounds of iron chains were put inside as well, to ensure that the body would sink. The bagged body was placed on a white table at the rail of the ship; the table was tipped over to drop the body into the sea. It was so heavy that it dragged the table in with it. As the body sank quickly out of sight, the table bobbed on the surface,” Panetta wrote.

Current U.S. Navy burial at sea regulations, last revised in 1999, cite that a burial may be no closer than 3 nautical miles from land, off the continental shelf, and in water no less than 600 feet deep. Remains must weight at least 300 pounds with sandbags used for additional weight if needed.  If the remains do not submerge upon impact with the water, the commanding officer of the vessel is authorized to order the remains retrieved for additional weighing prior to returning them to the sea.

After his stint as CIA chief, Panetta transitioned to the post of Secretary of Defense until 2013. In an interview this week with NPR, Panetta warned that the fight against terror will be a long and sustained war.