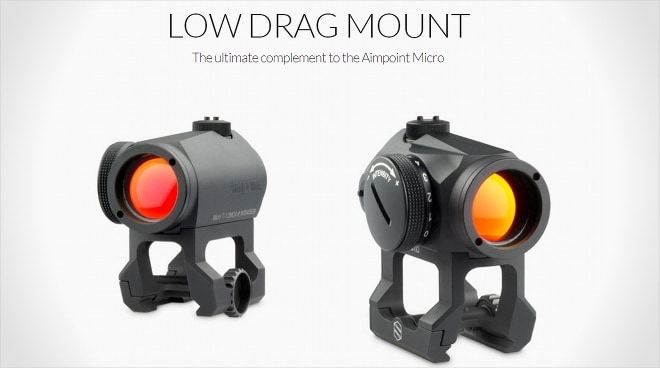 Scalarworks has recently added slick featherweight risers for Aimpoint Micro red dot sights and other optics that use the same mounting system to its line-up that will make anyone feel warm in their tactical pants.

Joining the growing pool of ultralight mounts, the Low Drag Mount adds only 1.33 or 1.38 ounces to a build, depending on the sight height.

The LDM is offered in two versions, one that provides an absolute co-witness with iron sights and a slightly taller lower-third co-witness. The added height is what puts on the extra .05 ounces.

While there are some mounts that weigh a little less, specifically the skeletal Fortis F1 series for Aimpoint Micro red dot sights, which starts at 1.1 ounces, the LDM has a few features that make it stand out for more than just its light weight. 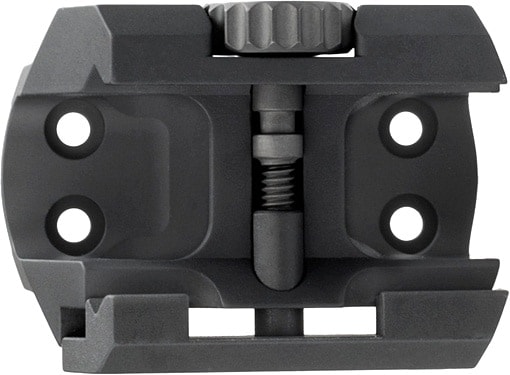 The LDM sports a particular mounting system not common to most mounts, especially not lightweight mounts. Instead of screws or heavier levers the LDM mounts to flattop receivers using a thumbwheel that’s locked in place with a ball detent.

Sure, it’s not the same as a true quick-detach system but combined with the telescoping clamp system Scalarworks guarantees that it can be taken off and put back on quickly — and more importantly while retaining its zero.

The wheel is toothed for a texture that’s easier to manipulate. To keep it from being a snagging surface the wheel is sunk into the clamp and sits flush with the side of the mount — it’s literally a low-drag mount.

It is built to last using 6061-T6 alloy aluminum with a MIL-SPEC hard-anodized finish. The steel parts are made with 303 stainless steel and have a black oxide finish for corrosion resistance.

Doesn’t have to be a lightweight rifle to enjoy the LDM. (Photo: Scalarworks)

Scalarworks has put together an attractive package with the new LDM and we expect to see it on a lot of builds, and not just lightweight builds only. The LDM’s clever mounting system and clean looks are enough to make it stick out from the crowd.

Both models are priced at $149 meaning they’re also plenty affordable to boot. With the LDM you don’t have to pay more to get a lightweight and well-thought-out mount for your Aimpoint, Vortex or Primary Arms optic. For details and ordering information, head over to the Scalarworks LDM product page for more.