Opinion: Warning Shots -- to shoot or not to shoot?

Chris Harris and his fiancé, CC Roxby, were coming from church one Saturday evening around 8:30pm in Wheeling, West Virginia.  Nine men were following them.  According to Harris, they said were going to rape his girlfriend and cut him.  Roxby pulled her gun. Harris grabbed Roxby’s handgun.  One of the men kept advancing.  Roxby called 911, and Harris fired the gun into the air.  Harris was later arrested for wanton endangerment.

The very first thing to consider when hearing any story is the truth.  Remember, the media is trying to sell a story.  An objective audience should seek to read between the lines and find the truth.  While that’s, in reality, the judge’s job, it’s important for you and I to approach any media report with skepticism (even those found on Guns.com).

The news media provides us with an indispensable service but it is still a business after all—the more sensational or odd, the better.  Therefore, beware of the first report…and the second and third reports, too.  But most of all, beware of jumping to conclusions.

In this case, we don’t hear from the police who responded, and we don’t get to read the full police report.  We also don’t hear from the men who were following the couple—the alleged accosting gang (note: the word gang here is used loosely since we don’t have all the facts to see if they were a bona fide street gang).

Also, reporters get things wrong and misquote people.  Point in case: a written news article quoted Harris as stating that he had taken “firearm prevention classes.”  If he did say that, he would obviously be a little, um, off base, because what the heck does that mean anyway?  In the video Harris clearly says, “firearm proficiency classes”, but you can see how carelessness or auto-correct could, in theory, end up telling a very different story.

Plus, when the news does make a mistake, they rarely go back to correct themselves and when they do, it likely goes unnoticed.  Shoot, I’ve been misquoted before.  Anyone who’s spoken with the media more than once in their lives will certainly be misquoted on occasion.

It likely needs no reminder but reporters are experts at the news–not firearms, self-defense and tactics.  Neither are politicians for that matter.

Laws in most states forbid anyone from shooting in a populated area.  Even pointing a gun, drawing a gun or otherwise displaying, exhibiting or brandishing a weapon can be a criminal act.

However, there’s a term in legalese called “totality of circumstances”.  In short, that means that all of the facts need to be considered when judging a certain crime.  Further, judgment will be based on a reasonable person standard (what a reasonable person in the same situation would do).

How does this apply to the situation above?  It means that the area the crime occurred will be taken into account: do gangs frequent the area? Do robberies, murders and aggravated assaults happen there frequently?  The physical size, strength, ability and conduct of both parties involved will be considered as well.

The “totality of circumstances” means police will account for the victims and attackers ages, the environment where the attack took place, and the levels of self-defense training present in either parties.

If Harris said he had gone to concealed weapons classes as reported, why didn’t he have a gun?  I’m speculating here, but perhaps his application was denied because of a history of criminal violence?  Maybe he just decided not to carry that day.  Or, maybe the cops decided not to charge him for an additional crime when they could have.  Who knows, but these are the questions that get asked when determining the totality of circumstances.

Speaking from an LE background, judging the totality in this situation means the police who investigated would need to speak to all the males.  That’s my word by the way because the media, said that they were “men,” Harris said, “kids”, and his girlfriend said “young men.”  While kids can be dangerous, their size, capability and their behavior would certainly be taken into account.

How can this affect a case? Harris says that the males stated they wanted to “rape” his girlfriend.  But, in reality, maybe they were just 15-year-olds who said some inappropriate things.  After all, with all that extra testosterone, hyped up on their own libido, and with an underdeveloped and immature mind, stranger things have occurred.

Regardless of what they really said, legally speaking, armed citizens have to remember “sticks and stones”.  You can’t draw a weapon on someone who isn’t presenting a threat that would justify an equal protective response.  Even if someone stated they were going to kill you, if they don’t have the means to do so, you’re not justified to use deadly force.  While drawing a weapon and shooting it into the air is different than shooting someone, if the totality of circumstances don’t meet the reasonable person standard, the law says what you have done something unreasonable.

According to the report, only one of the nine boys continued to advance towards Harris.  How far were the other boys from them?  Were they that big of a threat?  Stuff like this changes things big time.  One scrawny 15-year-old against two adults—and one of them with a gun?  What would a reasonable person do?  Given this situation, the kid probably messed his pants after the shot rang out.

That said, according to Harris, one of the boys—we don’t know which one—said he’d cut him (Harris).  Edged weapons change things big time… 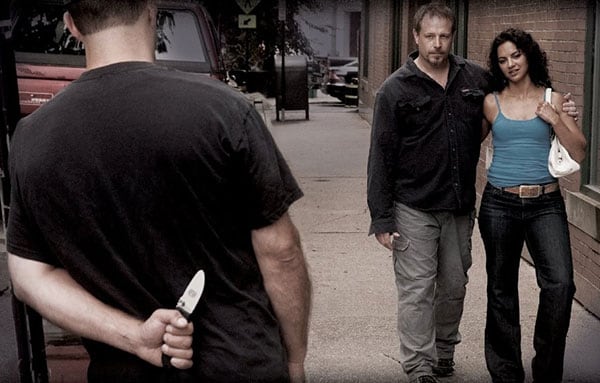 The introduction of a bladed weapon into a hostile encounter can dramatically change what is deemed legally justifiable in terms of a self defense response.

If an aggressor has and is using a weapon that can cause serious bodily injury or death, most laws allow deadly force.  The aggressor would also have to have the means/ability, opportunity (e.g. proximity to the victim-defender) and intent to carry out such a threat.  The victim would need to be in peril—imminent jeopardy—before using such lethal force.  So, what does this mean?

If the “kid” had a knife (not one buried in his pocket, of course) and was lunging at—or advancing towards Harris—to where both Harris and his girlfriend feared for their lives, shooting him would have likely been justifiable.  Assuming, of course, that Harris did not provoke the attack.

I don’t believe that kid advancing had a knife though.  I don’t think any one of the young men even brandished a knife.  All the police would have had to do is ask both Harris and his girlfriend about knives—the ability of the kids’ to attack them with a knife—and without an affirmative answer, shooting a gun into the air would have been totally unjustifiable.  If Harris had been justified to shoot the kid, he would have been justified to shoot into the air.

But beyond that, a warning shot wouldn’t have been tactically prudent.

Shooting a warning shot, is almost never a good idea.  Sure, certain circumstances may justify doing so (never say never), but for the most part, blasting off a round aimlessly isn’t tactically smart or legally justifiable.  Before shooting a warning, de-escalating violence and leaving the area are foremost important.  And if you are going to shoot a warning shot in this manner, realize you still have to account for every round.

Mythbusters proved that shooting a 9mm straight up in the air doesn’t come down with the same velocity, more likely cut someone or give them a bump on the head, but not kill them.  But shooting a round at, say an angle of 45-degrees or less, would cause the round to arc and could hit someone, causing serious injury or death.

If you must shoot a warning shot, shooting into a good backstop, say a door or windowpane if you’re inside a building, may work well–but only do that as a last resort.  Shooting down into the ground would probably work better, depending on the terrain, but beware of ricochets.

Having a good, don’t-mess-with-me presence and powerful verbal commands are extremely helpful.  How you carry yourself matters.  A confident attitude, especially while holding a firearm, matters a lot.  I say this because in the situation in question, Harris said the boys were mocking him, saying that he wasn’t holding a real gun.  What you say to others matters (by the way, if you end up pointing a gun at someone giving them commands, do so with your finger off the trigger). 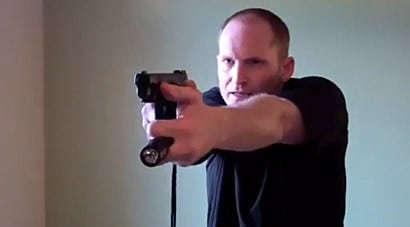 In any self defense scenario, an aggressive stance and confident attitude are linchpin to success. (photo credit: Jeffrey Denning)

In a self-defense scenario, how you express yourself and what you choose to say (or not say) matters.  Your unspoken body language should command respect and attention, especially if you’re holding a gun.  If not, that’s something to work on.  If not, maybe you drew your weapon too soon because if you pull out a gun in a self-defense situation, but you’re wrong (unjustified) in doing so, the other guy could pull out a gun and shoot you—and be justified because he thought you were the bigger threat!

Also, if you’re ever involved in a shooting, or if you have a gun on you and police arrive, realize officers might put you into handcuffs.  Police do that for their own protection.  When the threat subsides and the initial investigation is over, once police have decided not to take you to jail, you’ll be released.

Remember, media reports are often a short glimpse of a big picture, and sometimes slanted for opinions, political interests, and to sell a story.  For instance, the article stated that Harris was a Sunday school teacher and was put into handcuffs.  This is an interesting, but irrelevant part of the whole scenario.  Such a statement only serves to make the viewer feel sympathy towards Harris, to shape opinions that he’s really the victim and that the cops were completely wrong, even though we only hear statements from Harris and his girlfriend.  In this case, the piece is entirely one-sided since no one else was interviewed.

When someone is charged with a crime, they go to court where their innocence or guilt is to be proven.  During the trial, the court tries to gather all the facts of the case.  Sure, it’s much more complicated than that.  Regardless, the totality of circumstances will be taken into account, and every person will be judged based on a reasonable person standard.

In this instance, the girlfriend had already called 911 and police were responding, and it appears that Harris was not in imminent jeopardy at the time he shot the gun into the air.

Lastly, although Mythbusters proved that shooting a round up into the air (in this case a handgun) won’t necessarily kill anyone, shooting a gun in the city under the circumstances given by the article seem irresponsible.  At least that’s what police believed at the time.  Plus, Harris or his girlfriend may have gotten some permanent hearing damage from shooting without hearing protection, which could be very serious.  Was it worth it?  I think not.

Do police sometimes get things wrong?  Absolutely.  Sometimes the media gets things wrong, too.  To be fair, I could be wrong.  I’m not the judge and I haven’t heard both sides of the case.  Thankfully, though, because of the US Constitutional guarantees, Harris will be given a fair trial and I am allowed to give you my opinion.  Who knows, maybe the whole charge will be thrown out?  But I doubt it.

In the end, just knowing how to shoot doesn’t mean you should.