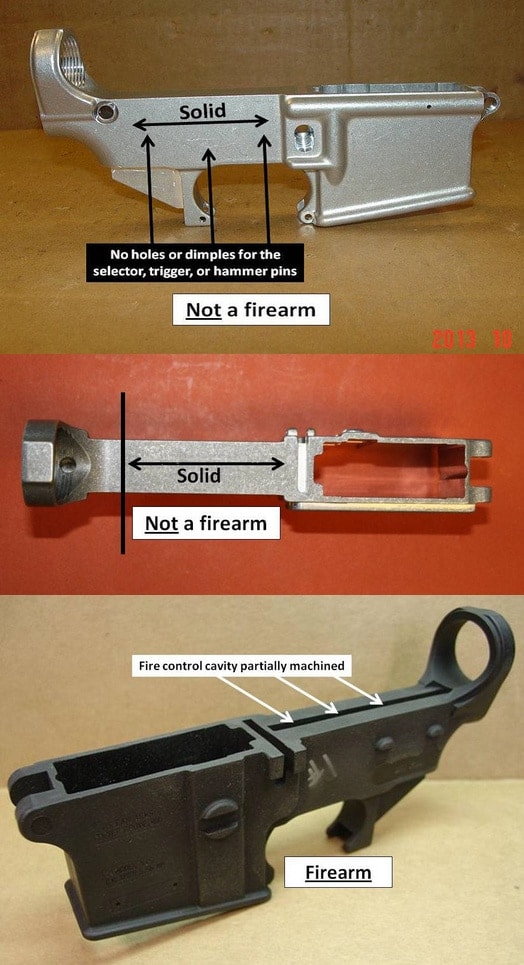 Cavities and other cuts define a firearm. (Photo: ATF)

The Bureau of Alcohol, Tobacco, Firearms and Explosives issued a 14-point clarification on what does and what does not make an 80 percent lower receiver, and reminds people that they’re legal to buy.

The ATF’s clarification re-states its position on 80 percent lowers, highlighting the fact that any blank must not be pre-drilled, cast or dimpled to aid in manufacturing.

The “Receiver Blanks Q&A’s” maintains that it is legal to sell 80 percent lowers and machine them into firearms and explains “there are no federal restrictions on an individual making a firearm for personal use, as long as it does not violate the GCA or National Firearms Act.”

Recently home gunsmiths found themselves in the spotlight when the practice of manufacturing 80 percent receivers into complete firearms made headlines as “Ghost Guns” as famously described by California Sen. Kevin de Leon.

While private manufacture of 80 percent receivers is completely legal, the ATF takes issue with some aspects of the practice.

“Because receiver blanks do not have markings or serial numbers, when firearms made from such receiver blanks are found at a crime scene, it is usually not possible to trace the firearm or determine its history, which hinders crime gun investigations jeopardizing public safety,” the statement says.

“[F]irearms that began as receiver blanks have been recovered after shooting incidents, from gang members and from prohibited people after they have been used to commit crimes,” the statement continues.

Making 80 percent receivers into working firearms is generally legal as long as the person making the guns isn’t a prohibited person and the guns are for personal use. The guns also have to comply with other laws including the NFA.

If the guns are being manufactured for a profit then the builder is going to need to get a Federal Firearms License, a process that the agency details as well. Anyone looking to turn a buck making 80 percent receivers into must first “submit ATF Form 7 (5310.12), ‘Application for License’, with the appropriate fee in accordance with the instructions on the form to ATF.”