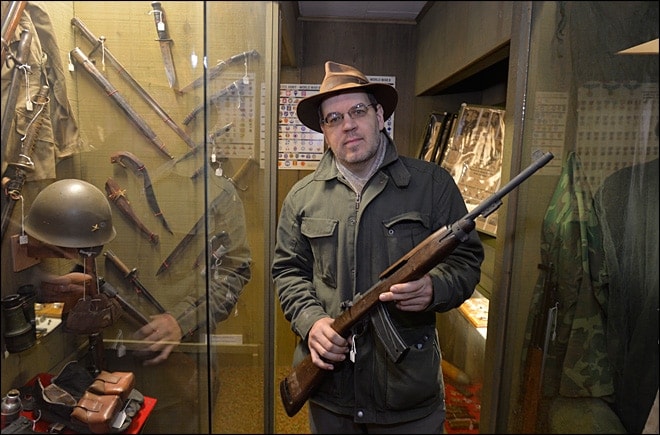 Lynden Pioneer Museum director and curator Troy Loginbill, holds a historic M1 Carbine on loan to the museum. Under the new I-594 ballot measure, he says he has to return the guns to their donors. (Photo:Komo News )

A small museum in Washington state is planning to pull a display of historical guns over questions about the legality of transfers following passage of Initiative 594.

The controversial 18-page ballot referendum, which voters approved by a 9-point margin earlier this month, greatly expands background check requirements to include most private gun sales and transfers. While supporters held that the measure’s intent was to close a dangerous loophole which provided criminals with guns, all the Lynden Pioneer Museum knows is that they now have to pull 11 vintage rifles currently on display and return them to donors to become compliant with the new law.

“The museum will be returning these guns to their owners because as of Dec 4, we would be in violation of the law if we had loaned firearms that had not undergone the background check procedure. Nor would we be able to return those firearms unless the owners completed the back ground check procedure,” the museum posted to its Facebook page.

The small non-profit institution with an annual budget of just $132,000 does not have the funding to either purchase the firearms or pay for the background checks mandated should the current donors wish to transfer ownership.

The rifles in question, part of the museum’s “Over the Beach: The WWII Pacific Theater,” exhibit, include an exceptionally rare Johnson M1941 used by U.S. Marines in the early part of the war, a Reising submachine gun, and a captured circa-1935 Japanese 7.7mm Type 99 machine gun. Other items in the display include historic military vehicles, gear and photographs that will remain even after the relics are returned to the immediate possession of their owners.

Gun rights advocates who opposed the expanded background check initiative are not surprised that the museum is now in a quandary as to what to do with its loaned firearms.

“This is just the first of what will likely be lots of examples of unintended consequences of I-594, and reflects on how poorly written it is,” Dave Workman, a spokesman for the Bellevue-based Citizens Committee for the Right to Keep and Bear Arms, told Guns.com.

According to a non-partisan legislative analysis by the Washington State House Judiciary Committee, I-594 requires that “all sales and transfers” of firearms are subject to background checks. This is to include “gifts and loans.”

However, the group who sponsored the new law, the Washington Alliance for Gun Responsibility, contends that the show can still go on at the Pioneer Museum.

“Our view is this situation has nothing to do with 594 and the museum should feel confident in continuing with the exhibition without issue,” WAGR representative Geoff Potter told Guns.com in an email Wednesday. “594 is about making sure people buying guns go through a background check to ensure they’re not a convicted felons, domestic abusers, or the seriously mentally ill.”

A noted Second Amendment expert, Kopel is the research director of the Independence Institute, an associate policy analyst with the Cato Institute, an adjunct professor of advanced constitutional law at the University of Denver Sturm College of Law and a contributor to the Volokh Conspiracy.

“The millions of dollars of I-594 advertising purchased by Bloomberg and his fellow plutocrats never informed that I-594 would crack down on museums, and on many other places where firearms are loaned for wholesome and constructive purposes,” Kopel said. “Instead of writing a law that was about private sales of firearms, Bloomberg wrote a law criminalizing simple loans of firearms — everything from letting your friend examine your new gun for five minutes, to loaning a historic firearm to a museum for long time.”

In all, former New York Mayor Michael Bloomberg’s Everytown gun control group helped finance the I-594 campaign to the tune of some $2 million. Along with funds from billionaire contributors Nicolas Hanauer, Connie Ballmer and Bill and Melinda Gates, WAGR had a war chest of over $9.45 million at its disposal, outspending the National Rifle Association by a factor of 18:1 in the state.

Kopel argues the true goal of the successful ballot referendum, now law in Washington state at least, is a step into a darker future for the Second Amendment.

“As I-594 demonstrates, the real Bloomberg agenda is not background checks for private sales, but rather exterminating America’s gun culture,” Kopel said. “Preventing a museum from displaying the historic firearms that Americans used to defeat tyranny is a good first step on Bloomberg’s extremist and destructive program.”

Meanwhile, Everytown is funding a new ballot initiative, similar to 594, in Nevada and has plans for Arizona and Maine as well.