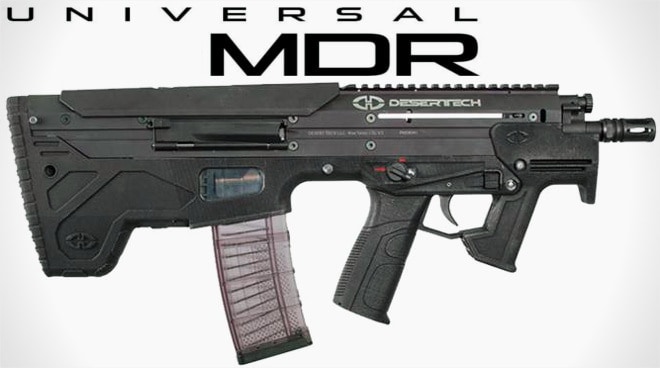 The Micro Dynamic Rifle is one of the most highly-anticipated rifles in development today. In the works from Desert Tech the MDR is a multi-caliber bullpup unlike anything before it.

The MDR has uses a quick-change free-floating barrel system that will allow users to convert their 5.56 NATO rifle to 6.8mm Remington SPC, 7.62x39mm, 300 AAC Blackout and even 7.62 NATO. It’s a game-changer.

Desert Tech said the MDR will be offered with a variety of barrel lengths for people in places that have overall firearm length or minimum barrel length requirements including California, Canada and Australia.

This also gives people the option of picking up an MDR with a longer barrel if they’re looking for a little extra performance in the velocity department. Even with longer barrels bullpups are still shorter than most conventional carbines.

For people who want the most compact rifle possible, Desert Tech will have the MDR-C, a PDW-style SBR with a 10.5-inch barrel. The MDR-C will also be offered with a 19-inch barrel to comply with federal and foreign laws for people building an SBR or who just want a funky-looking rifle.

The standard MDR barrel assembly features an integral, folding adjustable front sight gas block. This will let users sight in each barrel assembly to itself, ensuring that the rifle has the same zero with different cartridges or barrel lengths.

The MDR-C will still have an adjustable gas block but it doesn’t have an integrated front sight. Instead users will have to rely on an optic like a red dot or holographic sight.

Another change to the MDR-C is the handguard. Instead of a standard forend the compact model has a mini pistol grip-style forend that wraps around the front of the trigger guard.

Functionally the MDR-C is the same as the regular bullpup, which is one of the most forward-thinking designs of its time.

The MDR is a truly ambidextrous bullpup with mirrored controls on both sides including the safety selector, bolt catch and magazine release. The mag release itself is an innovation placed in front of the trigger like on an AR, not behind the grip like on other bullpups.

The barrel assemblies are free-floating and Desert Tech promises precision rifle accuracy with the MDR, not 2-3 MOA which is standard with most bullpups.

And the MDR will have a great trigger, too. While most bullpups have long, spongy and heavy triggers, pre-production MDRs have two-stage triggers that break at just 2.5 pounds, which is unheard of for a factory bullpup rifle. Production models are expected to have a 4-pound two-stage trigger that can be user-adjusted down to 2.5 pounds.

The ejection is reversible with a parts change but time will tell if the demand will justify putting them into production. While the MDR technically ejects on the right side, it ejects them forwards from the user, not to the side. The MDR is fully lefty-friendly right out of the box.

If you want to stay up-to-the-minute on MDR news then head over to their Facebook page and give them a like. For details on the upcoming MDR configurations visit the Desert Tech website.