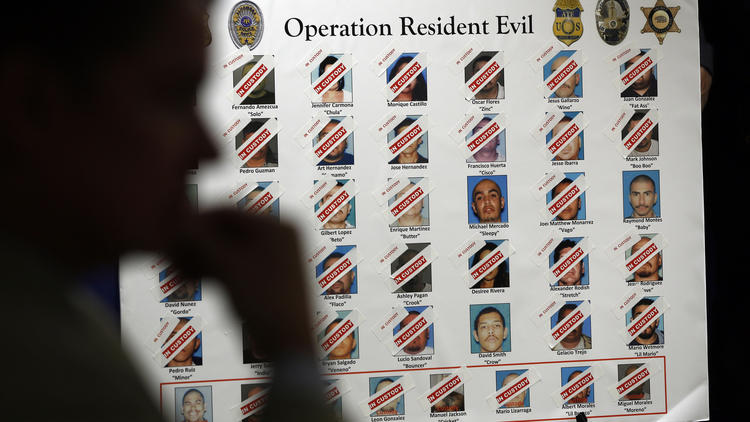 A poster with mug shots of suspects — most of whom are now in custody — is displayed at a news conference where the arrest of 25 members of the Big Hazard street gang was announced under a federal organized crime indictment. (Photo: Rick Loomis / Los Angeles Times)

Five suspected gang members with ties to the Mexican Mafia were still being sought by local and federal authorities Friday after a task force swept through an East Los Angeles apartment complex earlier this week.

Authorities descended on Los Angeles’ oldest housing projects in the Boyle Heights neighborhood on Wednesday, striking a blow to a street gang that has operated in the area for nearly seven decades.

Famously known as a hotbed of gang violence and reportedly the epicenter of Southern California’s drug trade, the Ramona Gardens housing complex is home to Hazard Grande, a multi-generational Latino gang made up of about 350 members who receive orders from the Mexican Mafia.

The investigation, called Operation Resident Evil, goes back to 2007 and was  a collaboration between the Los Angeles Police Department, FBI, IRS and the Bureau of Alcohol, Tobacco Firearms and Explosives.

A 110-page indictment named 38 defendants in federal racketeering charges that include murder, extortion and robbery. Twenty-five of the suspects are in custody, five are fugitives being sought by authorities and one was killed over the weekend — the result of what authorities believe was a gang shooting, said Thom Mrozek with the U.S. Attorney’s Office.

“This indictment and the arrests this week strike a serious blow to the gang,”  Mrozek told Guns.com. “We cannot tell you that this will signal the ‘end’ of the gang, but we do anticipate that the action will have a significant disrupting effect. Working with the community, law enforcement will continue its efforts against the gang with the goal of continuing to improve the lives of law-abiding residents.

The neighborhood also has a history of racial tension that still persists today, as evidenced by graffiti phrases like “Vario BHR no blacks,” an indication that the neighborhood was controlled by the gang, the indictment said. “BHR,” one variation of the gang’s moniker, stands for Big Hazard Rifa, the latter word translating to “untouchable.” 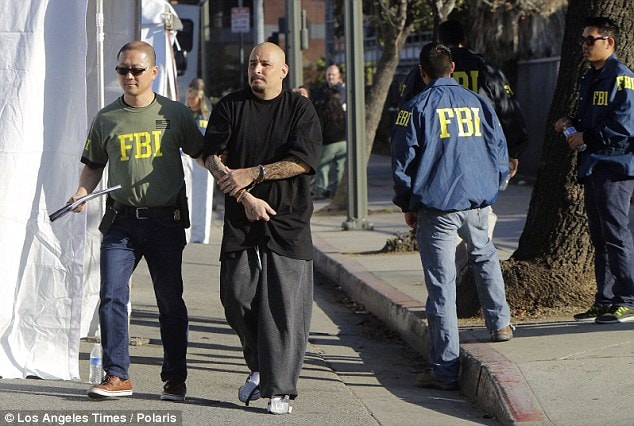 Just this year, the Ramona Gardens apartment complex was set aflame by unknown suspects tossing Molotov cocktails. The victims of the fire were black residents.

“All of the gang’s operations were done under the umbrella of intimidation – making threats and then committing acts of violence against rival gangsters, law-abiding members of the community and Hazard gang members who might be cooperating with authorities,” said acting United States Attorney Stephanie Yonekura. “The intimidation and threats extended to African-American residents of Ramona Gardens. In stark and simple messages delivered in person and through graffiti, the Hazard gang made it clear that black residents were not welcome in the neighborhood that it claimed to control.”

One of the ways authorities were able to bring charges against the gang under the the federal Racketeer Influenced and Corrupt Organizations Act was by way of the Hazard’s taxing system, which got the Internal Revenue Service involved.

The gang’s stock and trade was and still is the selling of drugs like methamphetamine, PCP, heroin, cocaine and crack. The indictment lists several instances of shot callers collecting “taxes” on behalf of the gang for drug sales. The money eventually makes it to the Mexican Mafia, who controls a network of street gangs and essentially runs the California prison system.

Though the poverty-stricken area of Boyle Heights is still reeling from decades of violence and extortion enacted on it by street gangs, there are good people who live there and it’s getting better, said Los Angeles police officer Jack Richter, who patrolled the streets of Southeast L.A. for a couple years.

Richter told Guns.com that more than policing, it’s community programs that have helped to transform the neighborhood. Gangs like Hazard like to recruit children and juveniles, partly because they’re given junior sentences.

To combat this multi-generational cycle of gang activity, which today has created a pool of up to 30,000 gang members in Southeast L.A. alone, LAPD sets up sports and other after school programs where the community is able to interact with police in more than just a law enforcement capacity.

“Because of these programs, officers build a relationship with the community,” Richter said. “It’s the best it’s ever been.”