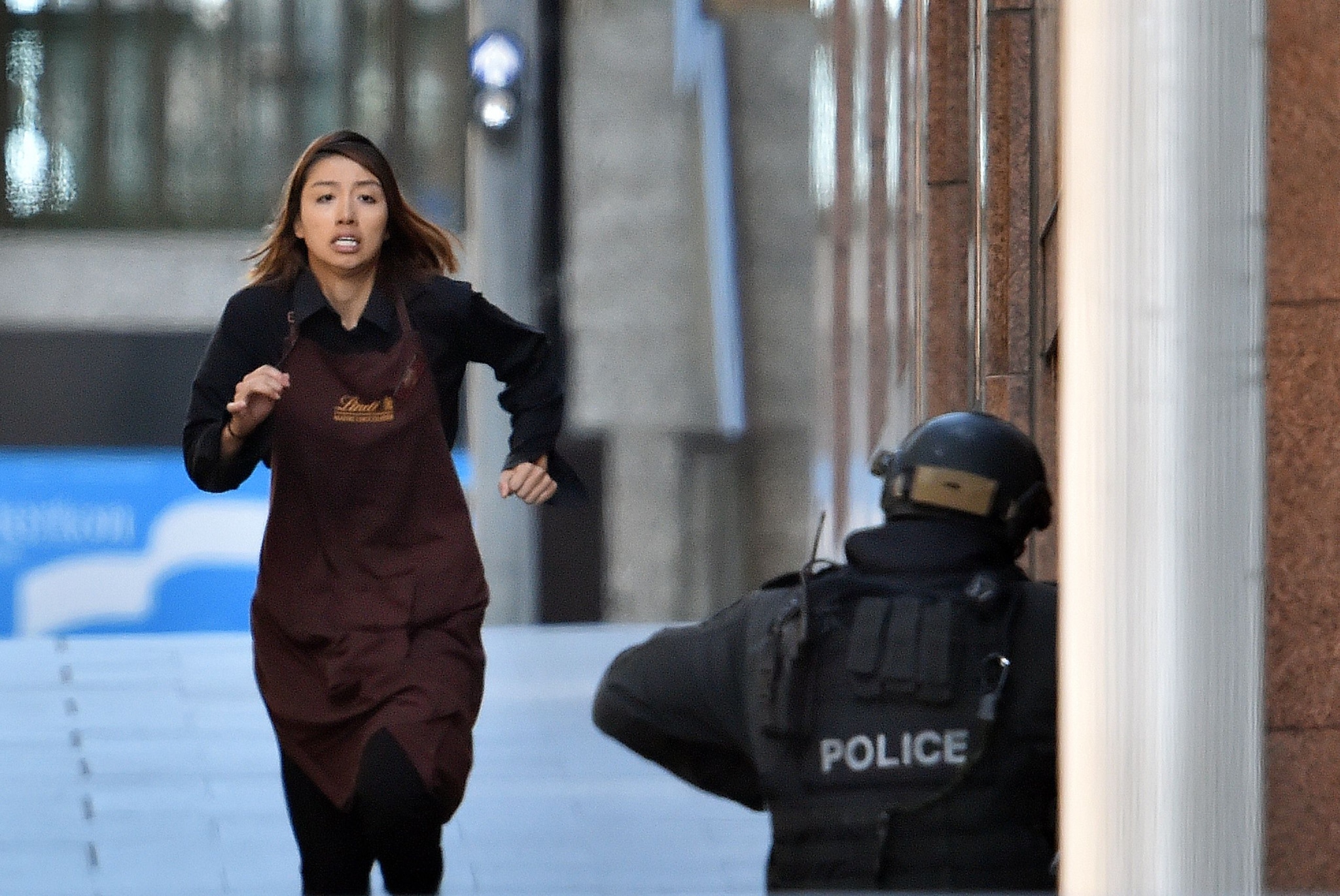 A hostage runs from the scene of the Lindt cafe in Sydney Tuesday during standoff with a gunman that resulted in three killed and four injured. (Photo: AFP/Saeed Khan)

Following the violent siege of a coffee shop in Sydney this week that left three dead, some Australian lawmakers are calling the country’s strict gun control scheme “useless.”

A 16-hour standoff Tuesday at the Lindt Chocolat Cafe in the heart Australia’s largest city led to intervention by police that left two victims, cafe manager Tori Johnson, 34, lawyer Katrina Dawson, 38, and the gunman among the dead, which also included the gunman. Four others, including a police officer, were injured.

The hostage taker, Man Haron Monis, self-styled Islamic cleric who was a refugee from Iran, was a known extremist facing criminal charges, but was still able to get his hands on a firearm in a country that has one of the strictest gun control laws in the world.

“No more useless gun laws. Because most of our gun laws now seem to be aimed at the law-abiding, not at the criminals,” said Jeffery Bourman, a member of the Victorian Legislative Council, the upper house of the Victoria, Australia Parliament, just following the attacks.

“Exhibit A: Sydney. None of our gun laws stopped that.”

Bourman, a member of the conservative Shooters and Fishers Party, contends that the country’s registration scheme did not prevent a known criminal from not only acquiring a firearm, but also from obtaining one of a type that has been illegal in the country for the past two decades.

It is believed that Monis used a pump-action shotgun in this week’s attack.

During the enactment of the law, the government bought back nearly 700,000 guns, but whether or not it had a positive effect is still up for debate.

Statistics show that violent crime remained steady, the murder rate dropped slightly and gun deaths had reduced, but the flow of illegal guns has risen along with assaults and murders by stabbing. While technically there hasn’t been a mass shooting since the measure passed — until the Sydney incident — there were numerous accounts where a gunman opened fire in a public place and the country’s 2012 murder rate of 40 firearms deaths was at a five-year high according to official statistics.

Bourman is not the only lawmaker on the Oceana continent to question the effectiveness of the country’s gun policy. In June, David Leyonhjelm, a Liberal Democratic Party member of the Australian Parliament, told Guns.com, “The bottom line is we are suffering under draconian gun laws that treat us like criminals in waiting, with zero public benefit but substantial public cost.”

Nevertheless, gun control advocates in the U.S. often refer to the Australian model as one of a success story when calling for increased bans on certain classes of firearms.

While the story of the tragic Australian siege was developing, Sen. Chris Murphy, D-Connecticut, a well-known champion for anti-gun causes, weighed in on the issue during an interview with CNN, citing it as a cautionary tale of the need for more, rather than less, controls.

“So, we’ve got to have a conversation in this country about the kinds of weapons that we make legal because assault weapons are more likely than not going to be used in these mass slaughters rather than used by some citizen to stop someone in one of those situations,” explained Murphy.

Citing a controversial study released by gun control group Everytown for Gun Safety last week that claimed there has been nearly 100 school shootings since the attack on Newtown Elementary School two years ago, Murphy continued, “Never mind what would happen if a Sydney-style situation happened here in the United States and that individual had a high-powered assault weapon inside one of these facilities.”