Go ahead and read that headline again. Yes, Magpul is making a magazine for the world’s most reliable pistol, the Glock 17. Cryptically titled the PMAG 17 GL9, this polymer replacement for the standard Glock 17 magazine appears to match the original’s reliability to a tee. It differs from the original with the inclusion of a stippled baseplate and bright orange follower, the former is to aid in magazine retention during reloads.

One detail that appears to be missing is whether the magazines feature metal feed lips or a metal skeleton like factory magazines. If this magazine were made by any company other than Glock or Magpul, it’d be a pass for most serious shooters. Since compromising an otherwise reliable platform’s magazine durability for no perceivable gains is short-sighted at best. Which isn’t to say that metal feed lips make or break durability, but they don’t hurt it. 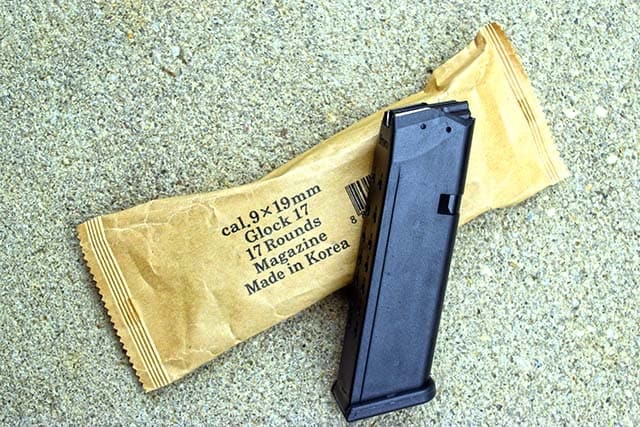 Korea makes a non-OEM magazine for the Glock 17, that’s cheaper than the GL9. (Photo: Jim Grant)

This echoes the cost-cutting strategy Magpul originally employed with their AK PMAGs, which unlike military-spec polymer magazines from Bulgaria or Russia, contain no metal reinforcements. That said, the AK PMAGs have yet to fail on me during several hard-use training courses, or in testing. Hopefully the new GL9s are equally well built.

Assuming they are, why would any shooter buy one over OEM mags or Korean-made copies? In a word: price.

The only tangible benefit of Magpul’s new Glock magazine is its ultra-low MSRP. Retailing for $15.95, the GL9 is slightly more than half as expensive as factory magazines.  While still about 50 percent more expensive than Korean-made clones, Magpul GL9’s have a presumed reputation for reliability that the Korean mags do not. Guns.com will test these magazines as soon as we can, and determine whether shooters should buy day one, or stick to what they know works.