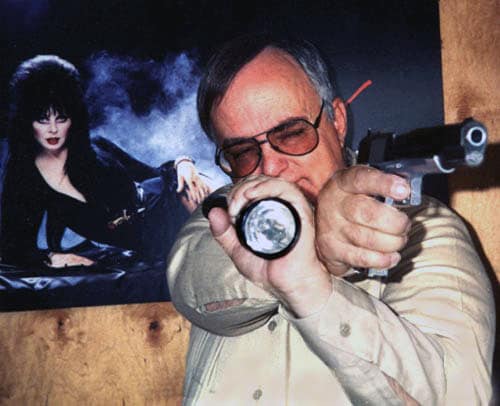 Michael Harries, USMC (ret.) passed away on November 25, 2000 but will always be remembered by the flashlight technique that bears his name (even if we do end up never using it again) (Photo: The Gun Zone)

Michael Harries developed a flashlight technique in the early 70s that is still popular today.  Originally, Harries created this method to use with large flashlights and handguns, but the technique works with small flashlights, too.

The shooter holds the light in an “ice pick grip”, meaning the lens is nearer to the pinkie finger.  Then the shooter puts the back of his or her hand to the backside of the hand holding the pistol.  For instance, a right-handed shooter will hold the pistol in his or her right hand and place the light in the left hand.  From the shooter’s point of view, the light will be on the right side of his or her gun.

The idea is to put the wrists together as well as the backs of the hands.  Pressing firmly, this can stabilize the hands.  But there are problems with using this technique.

I’ve trained hundreds of shooters and this flashlight technique—which is perhaps one of the most famous low-light shooting methods currently taught—tends to really mess people up.

First, shooters can get messed up and place their hand over the top of their shooting hand.  When using a semiautomatic pistol, the slide has the potential to hit their non-dominant hand and shooters also can’t see their sights.

Now any technique improperly employed is bad, but because this technique makes shooters switch the light from left to right (or vice versa), it can even further decrease cognitive functioning especially after even just a pinch of stress is added—and self defense situations heap on the stress, big time.

Second, unpracticed shooters can end up muzzling themselves.  You’re supposed to take your flashlight hand and move it UNDER your handgun and then get into position.  If shooters don’t already have their gun and arm extended, they can inadvertently muzzle themselves.  While it might be rare, frankly, it’s not worth it.

In all honesty, these first two problems with the Harries technique can be fixed with practice and repetition.  The final reason we need to do away with teaching this flashlight grip, however, is the most important and not so easily remedied.   Simply put, the crisscrossing of the left and the right hand required when using this method has the capacity to screw with the brain in ways that are taxing and unavoidable.

Mentally, shooters tend to concentrate on pointing the flashlight in the right place instead of intensely focusing on the sights of the gun which affects accuracy.  Even good shooters have a problem with this and, remember, under stress our physical abilities become diminished and our tendencies amplified.  As a result, most shooters I have seen have problems shooting accurately with the Harries technique without stress, and for this reason alone, I’d only keep this tool deep in my tactical toolbox of low-light/no-light shooting options.

In my opinion, the cons of the Harries technique outweighs the pros.  It’s a decent technique with practice, but I wouldn’t opt to use that technique first.  I’d opt to use the Graham method instead.