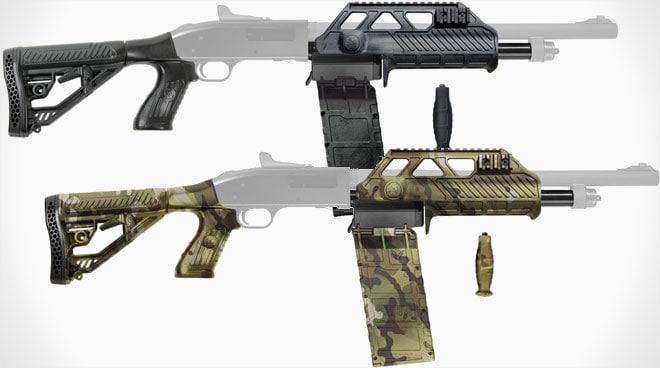 Adaptive Tactical is in the business of making box magazine-fed shotguns. The idea is straightforward: take a Mossberg 500 — or 590 or Maverick 88 — shotgun, replace the tube with a box magazine adapter, and double your capacity.

These kits are offered with five-round magazines which are compact and lightweight, but the draw for most shooters are the 10-round mags that Adaptive Tactical makes. With 11 shells on tap and another 10 more just a rock and lock away these kits convert common pump-action shotguns into lead-slinging behemoths.

Their standard conversion kit is called the Sidewinder Venom, and now they’re launching an updated series, the Venom-SE. The SE models centers around a new forend, the Wraptor. The Venom-SE kits are offered with and without M4-style buttstocks in a variety of camo finishes and use the same five- and 10-round magazines. Adaptive Tactical makes both box and drum magazines with 10-round capacities.

The new Wraptor forend completely encircles the barrel, providing the shooter with a “sight tunnel” that increases target acquisition speed, helping shooters of all experience levels get on target fast. 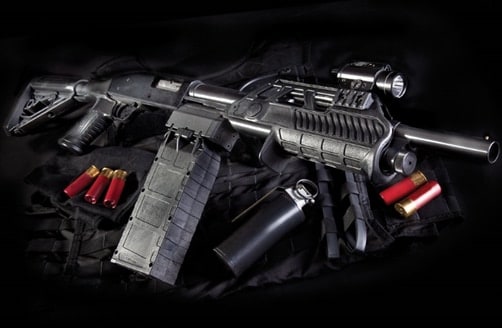 The Wraptor forend doesn’t block the front sight bead, it channels the eye to it, while providing rails for accessories. (Photo: Adaptive Tactical)

It also gives the user a tri-rail setup, with rails on the sides and top of the forend for weaponlights or even laser aiming devices, which are increasingly popular with guns for home defense.

All of the Venom-SE kits are offered with camo options, A-TACS, MultiCam and Desert Digital as alternatives to the standard matte black finish.

While they aren’t lacking in the tactical looks department, buyers should know that pistol grip stocks on these shotguns move the hand away from the tang-mounted safety. For range toys that’s less of an issue but if this is a home defense shotgun or a truck gun you may want to consider the forend-only kits and hang on to your original stock.

Adaptive Tactical will continue to offer the standard Venom kits for people not in love with the new Wraptor forend. With a street price around $170, the standard kit comes with everything you need, including tools, to upgrade your 88, 500 or 590 to a mag-fed shotgun that’s good to go.