Stance: If it’s not working for you, it’s working against you

Correct stance can make a big difference in recoil control and speed.  Not to mention, it’s the easiest way to look like you know what you’re doing.

Stance may be the least important fundamental of pistol marksmanship since real life may call for you to shoot from a seated, prone, kneeling, squatting, or….you get the picture. That being said, when firing from that standing, facing the target position you’re probably familiar with, a solid stance can enhance accuracy past the first “bang” in multiple-shot sequences.

The advice in this article applies to “isosceles” stance, in which the shooter stands with hips and shoulders squared to the target. In the” Weaver” position, the “support” (non-shooting hand) side of the body is bladed away from the target — and there are grip differences, but that’s beyond the scope of the matter here.

Most modern law enforcement agencies have, over time, adopted the isosceles stance as it is more naturally acquired and the fastest way to get sights onto the target.  At least that’s my opinion after watching numerous students in classes where Weaver is the standard of instruction.

When a speed requirement is added, all but the staunchest Weaver-indoctrinated students consistently, and I believe subconsciously, switch to isosceles.  There’s no doubt, THEY BOTH WORK.

However, that gun guru who still walks our earth, Jerry Miculek, has done a relatively scientific experiment that seems to put the debate to rest on which stance is faster to acquire.  It’s covered in a video he made on revolver shooting. Keep in mind that Miculek’s first rise to shooting stardom was achieved when practically everyone used Weaver.

Now that I’ve lost the readers who dislike isosceles, let’s get on to what this is really about: recoil control, comfort and greater speed through posture, specifically the vertical axis of your body.  Here are some guidelines (exceptions are covered after this review of the basics):

Some exceptions to the above may be that, during the path to becoming a better shooter, some may find recoil management more comfortable with the non-shooting side foot slightly forward of the other. Others may have injuries or arthritic joints that simply won’t comply with proper technique.  If that applies to you, just make everything else as correct as possible. 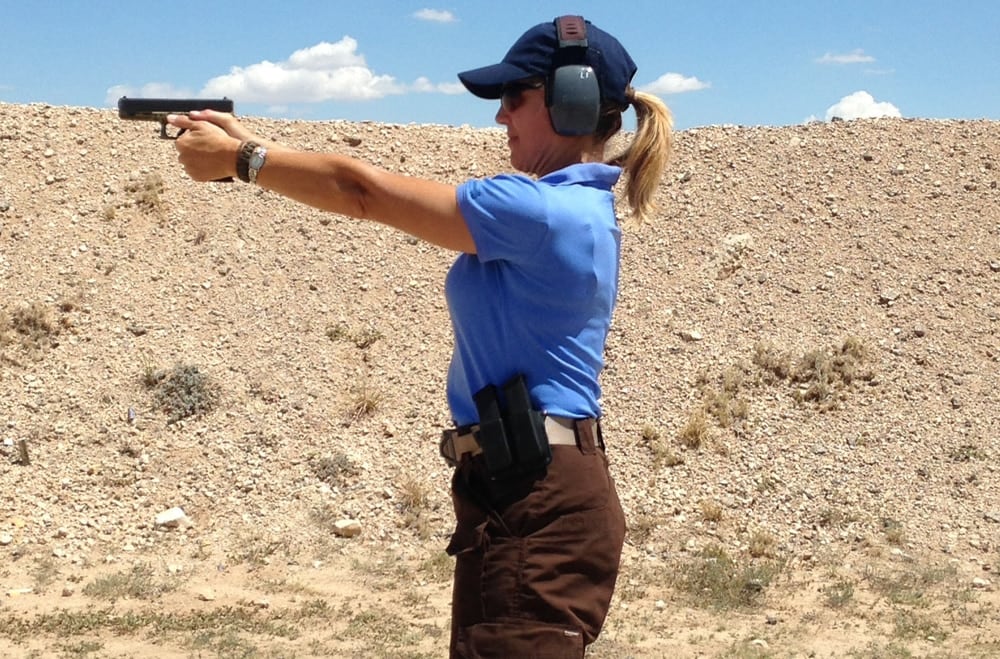 Typical errors in stance I see, with most new shooters and for some reason virtually every new female shooter, are:

Leaning back. Often because they fear the noise or recoil that originates at the end of their arms, new shooters usually lean backward, shoulders-behind-hips. This accomplishes two unwanted ends: back strain and insufficient recoil control, as every round ratchets the shooter slightly even more backward. 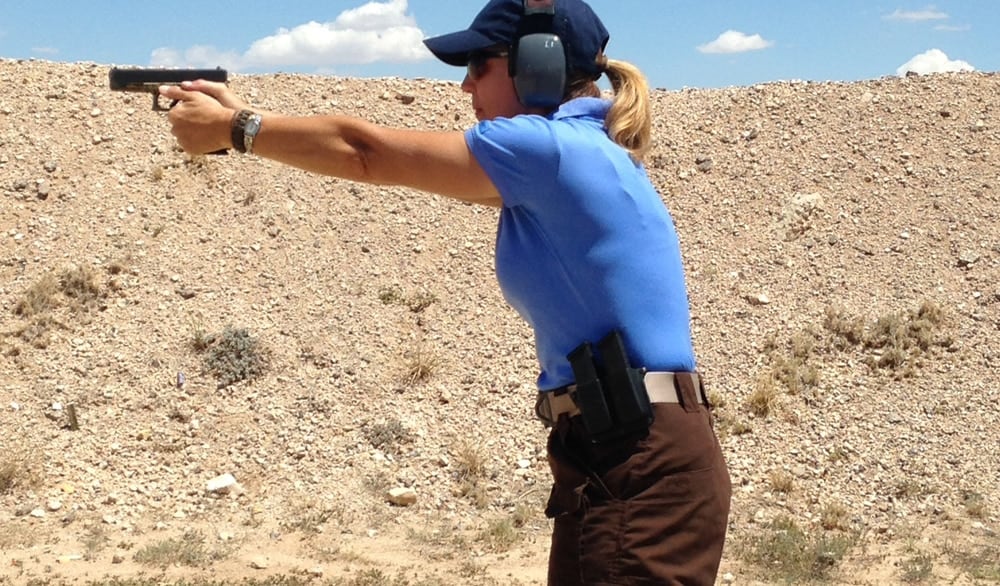 When the lean is corrected and the shooter regains her orientation of leaning slightly toward the target from the hips, the next predictable error is to have…

Softened elbows. It’s as if the shooter is apologizing for taking a more aggressive stance toward the target, so she softens her elbow joints.  The least of the inevitable undesirable result of this is poor recoil control. The worst is that she induces a malfunction by not providing adequate resistance to counter the action of the slide, where semi-automatics are concerned. 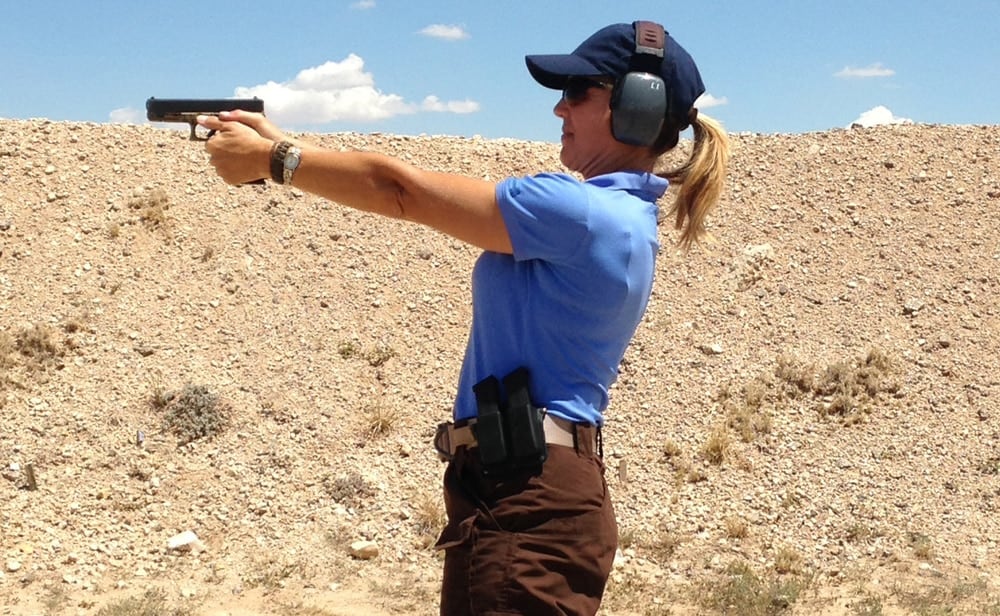 The lean back. (Photo: Eve Flanigan)

If you don’t understand that a semi-automatic is a gas-operated system that needs some tension, think of attempting to play a guitar on which the strings are loosely attached on one end.  You might get one note or two, but soon that instrument won’t work.  The shooter’s firm grip, locked wrist joints and firm elbows are essential to correct function of a semiauto.  There I go, drifting into the topic of grip again, because it’s supported by stance.

To achieve proper stance in your own practice, imagine you’re trying to press the front sight right through the target, but your feet are anchored to the ground at the balls of your feet.  Fire a shot, and then more, maintaining this posture before, during and after each shot.

Self-imposed perceptions of appearing too aggressive when leaning forward and pressing he front sight toward the target have no place in good practice.  Dispose of those beliefs now if you have them.

There are always exceptions to rules.  Shooters whose body mass is sufficient to absorb the recoil of their chosen handgun can often stand stock-straight and shoot accurately.  The advice in this article will work for any shooter who is able to stand and shoot, regardless of body size.  Keep in mind that, though you may feel awkward at first shooting in a leaning-forward position, your body is more mobile and able to respond quickly from this slightly forward stance.

A correct stance slightly coils the core of your body, making you more nimble and able to respond in a real criminal attack. Shooters who use stock-straight posture may find that, when picking up a larger caliber or higher-recoil weapon than the one they’re used to, their recoil management and ability to get multiple shots off quickly is diminished by the ratcheting action imposed on their lower back by recoil.

Although often met with feelings of awkwardness or skepticism, the shoulders-forward stance will serve you well regardless of the handgun you’re shooting, whether you’re familiar with the gun or not.  It can protect your lower back from injury. And who can argue with the fact that you’ll look and shoot better as you match your mechanical structure to fit the function of your gun?