James Madison Tactical, who makes inexpensive polymer composite 80 percent AR lowers, has just received the green light to sell its newest product, an 80 percent .308 Winchester AR lower. As sold, 80 percent receivers are not legally firearms and can be shipped through the mail.

“Many people mistake the idea of an 80 percent lower as a way to save money when in reality it has nothing to do with that,” the company posted to Facebook. “It’s all about providing a way for law abiding citizens to exercise their right to build a non-serialized firearm. We believe it’s a right every law abiding citizen should put to use at least once in their life.”

Users must complete these lowers by machine out the pocket for the fire control group and drilling the pin holes. Once completed, they can be used with all DPMS-pattern upper receivers and standard lower components. 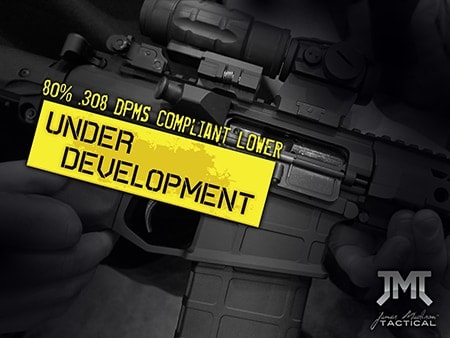 These 80 percent .308 lowers are DPMS compatible and come with a jig for fast and simple completion. (Photo: JMT)

Because the lowers are polymer, they provide a fun project that’s easier to machine for the home gunsmith, and they don’t require any refinishing after they’re machined. On top of all that, JMT goes the extra mile by including a polymer jig to use as a guide for the necessary machining.

Now that the lowers have received ATF approval James Madison is putting them into full production after a round of initial testing. The lowers are expected to hit the market toward the end of this April. Pricing has not been announced but their other lowers are priced at $99, which includes both the 80 percent receiver and the jig. Jigs often sell for well over $50 so that’s a real value.

The .308 Win. receivers are styled after their overbuilt Gen 2 lowers with its PMag-pattern magwell reinforcements. The lowers are still multi-caliber marked and the safety selector read “fire” and “safe.” Raised ribs reinforce the full length of the receiver, from the magwell to the buffer tower extension. The buffer tower and the front takedown pin holes are also overbuilt to withstand hard use.

Additionally, because the lowers start out as a single block, they don’t have any seams or friction welds to break along. The lowers’ monolithic design adds a lot of structural integrity.

Not everyone’s sold on polymer receivers but it’s a winner for JMT. These 80 percent lowers are fast and easy to machine and have earned a strong following. If you’re a fan of the JMT design and looking for your next big-bore 80 percent project keep your eyes peeled for these tough and stylish lowers.