Henry's got a Mare's Leg – make that five Mare's Legs

Henry Repeating Arms is now making five Mare’s Leg lever-action pistols. These leverguns are offered in .22 Long Rifle, .22 Magnum, .357 Magnum, .44 Magnum and .45 Colt. Patterned after Steve McQueen’s own, these Mare’s Legs will have no problems drawing a crowd.

A Mare’s Leg is a short lever-action gun that sits between revolvers and carbines in terms of performance and capacity. They’re a bit of a compromise on all fronts, with one exception: coolness. There’s no doubting the cool factor of Mare’s Legs and they appeal to shooters of all stripes. You can be a black rifle type and still want a Mare’s Leg — their levels of fun transcend barriers.

There are a couple of prominent Mare’s Legs on the market today but these Henry guns offer a little extra. The centerfire models have brass receivers and barrel bands and classic octagonal barrels. On top of that all of Henry’s Mare’s Legs have Marbles fully-adjustable semi-Buckhorn rear sights with reversible white diamond inserts and brass bead front sights. 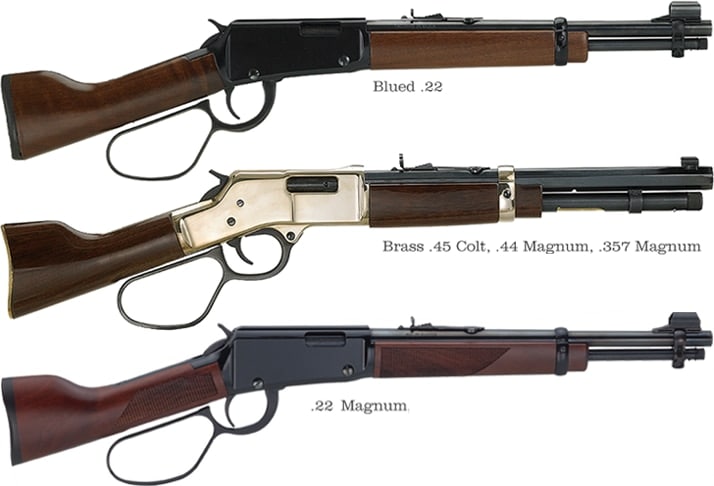 But the guns that really stand out are the rimfire models. In their plain configuration with blued round barrels and receivers, simple wood grips and forends and hooded front sights, these classy guns are a plinker’s dream come true. With a solid 10-round magazine capacity in .22 LR and 8 in .22 Mag., these compact leverguns will fit a lot of roles.

Owing to the magazine design the centerfire models hold a few less rounds than you’d expect, with a capacity of 5+1 in .357 Mag., .44 Mag. and .45 Colt. Still, the extra barrel length will guarantee improved performance compared to most revolvers.

With their 12-inch barrels, these guns, regardless of cartridge, will perform at or at least close to their fullest potential, delivering solid muzzle velocities that make them better than your average wheelgun whether it’s for target shooting, varminting and small game hunting or even self-defense if need be.

Henry’s new centerfire Mare’s Legs are priced right, too. The centerfire models are a step up in terms of style and quality over existing imported Mare’s Legs, and priced competitively with lever-action rifles and carbines with an MSRP of $975. But the rimfire Mare’s Legs, which have the most fun potential, have MSRPs of just $440 and $450 for the .22 LR and the .22 Mag., respectively.

These leverguns are already on their way to or in stores today and the rimfire models are currently listed in the mid-$300s, making them a very tempting potential addition to anyone’s gun collection, whether they’re all business or range toy collectors.