Ever lugged multiple guns, ammo, and all the shooting accoutrements across rugged terrain? Or tired yourself out at a shooting competition by packing all your belongings like a hitchhiking nomad? Well, there is really no need any more. Those familiar with sporting clays courses, three gun competitions, or large-scale cowboy action shooting forums will be instantly familiar with wheeled gun carts. Here’s why you need one and how to make—or even purchase–a good one.

After shooting countless rounds of sporting clays, I have really come to adore my gun cart. It allows me—and my shooting buddies—to bring numerous guns on the course. For instance, sometimes we like to bring a shotgun of every gauge for some friendly competition. All fun aside, any sort of shooting sport that involves multiple guns and large amounts of ammo and gear can benefit from some sort of shooting caddy.

Sure, we know you can lug your stuff by hand, by why risk either dropping one of your treasured guns or leaving something behind? 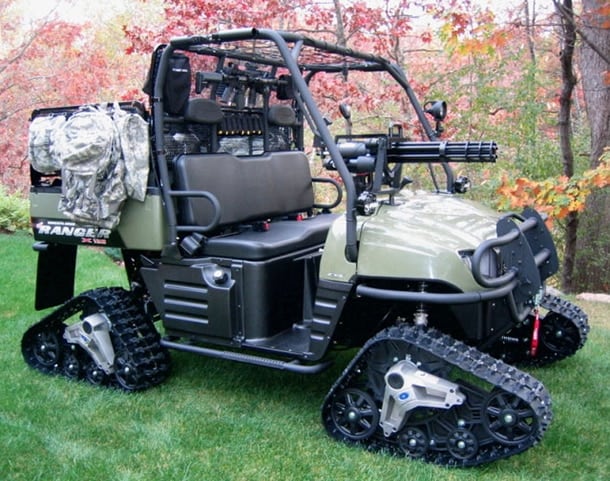 There are homemade makeshift carts of wood and wheels, and some on old two-wheeled golf bag caddies. Others use the frames of large moving dollies. The rich and famous of the shooting crowd put our wheeled pushers to shame with actual motorized golf carts or quads complete with gun racks. But, if you’re not ready to buy a 4wd side-by-side Polaris with custom gun racks, read on and get to building.

Perhaps the nicest part of the DIY gun cart is the option to accessorize and customize with individual needs in mind. My primary cart use is for weekly trips around the sporting clays course, which takes us over sometimes rough, muddy and uneven dirt and sand paths winding through a forest. I also wanted the options a cart provides for filming gun reviews when carrying multiple guns, ammo, video cameras, microphones, cords and the like. My videographer, for one, really enjoys the gun cart as it has removed his role as pack mule of video equipment into sometimes remote shooting destinations and ranges.

I’ve also seen numerous carts in use at three-gun competitions. After all, why expend extra energy hauling stuff when you’re there to compete? Besides that, the guns and gear are much safer mounted to the cart with no danger of being dropped, dinged or left behind.

You can run the guns muzzles up or muzzles down. Covering the muzzles in the down position is not a bad idea, and something I intend to address in the future. On my first cart, we also added a mesh laundry bag strapped onto the rear of the cart for scrounging up empty hulls on the clays course for reloading. A small cooler straps neatly to the front on those hot days of shooting, and we will also be attaching hangers for ear muffs. Carabiners can be hung just about anywhere on the frame, and we use these to hang our clipboard score sheets. These carts also make it easy to carry small folding chairs or stools for shooters who may need to rest between stations. 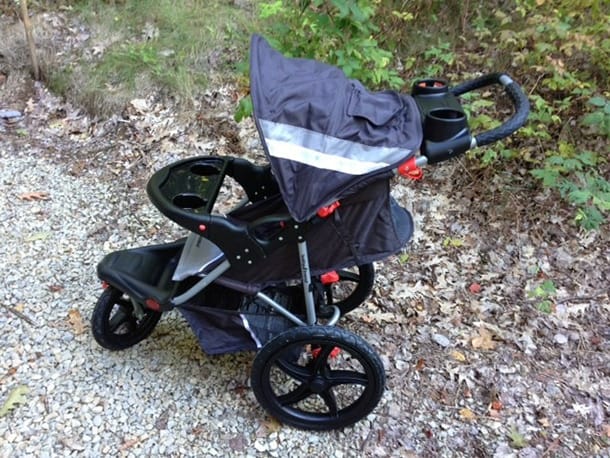 Though one can use most any wheeled contraption as a base for a gun cart, the jogging stroller is a natural. For one, it’s basically an identical frame to the commercially-made Rugged Gear carts. Jogging stroller’s wider wheel base and single front wheel make them ideal for pushing and also well balanced. If the thought of a stroller makes you cringe, think of it as a golf caddy for guns.

Because the first was so successful, we ended up building two very similar carts. The jogging stroller base from the first was scrounged from a rummage sale and the second from Craigslist, as we wanted to find the same model. The pneumatic tires were a must, and the swiveling front wheel is also great, and can be locked if needed. The top mounted cup holders are also very nice. Some models have hand brakes if you intend to tackle more hilly terrain. We were basically targeting a few models which had the beginning features we wanted, including the under-body storage area. I do not advocate stealing your children’s jogging stroller for this project, unless of course they’ve outgrown it.

Though jogging strollers are a great starting point, I certainly did not want my gun cart to look like a baby hauler. With that in mind, we started by drilling out the rivets that held the awning in place and got rid of that. Ditto on the front child tray. On one model, we sawed off the plastic tray supports with a Dremel; on the second build, we drilled out the rivets, removed the plastic entirely, and replaced the joint with bolts. Though this looks nicer, removing the plastic also removed a bit of the rigidity of the cart. 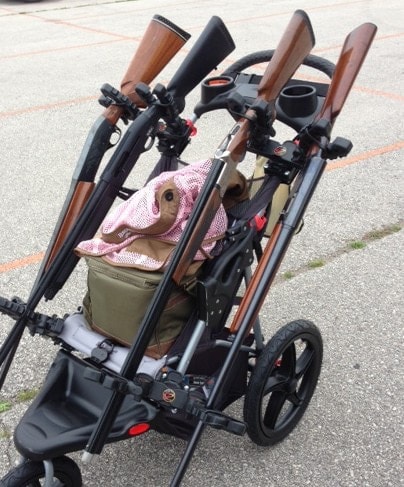 So you’ve started chopping up the baby hauler into a tacticool gun buggy, but how to hold the guns? Most online forums suggest bolt-on ATV gun mounts, and they are correct. After trying out several models of mounts, we really loved the Kolpin XL series. Our local Fleet Farm store had the double mounts on sale for under $40, though we found even better deals on Ebay. We used the double mounts so that we could get 4 guns on the cart, and the XL mounts swivel and tilt in multiple directions, which makes the cart entirely customizable. For longer guns, we simply tilt the outermost gun holders out to the side of the cart frame. The mounts come with rubber straps to lock the guns into place, though the mounts themselves hold snug enough that the straps are seldom needed. However and wherever you attach the mounts, just ensure that the bulk of the gun weight rests over the tires and center of the cart to maintain stability. The last thing you want is a back heavy, tippy gun buggy.

One of the nicest things is that jogging strollers are made to be folded and transported in the trunk of the car, so we wanted to make sure that our modifications still allowed the cart to fold. Even with the multiple sets of ATV gun mounts, the cart folds nicely and still latches shut with the original mechanism. It stores out of the way in the garage this way as well. 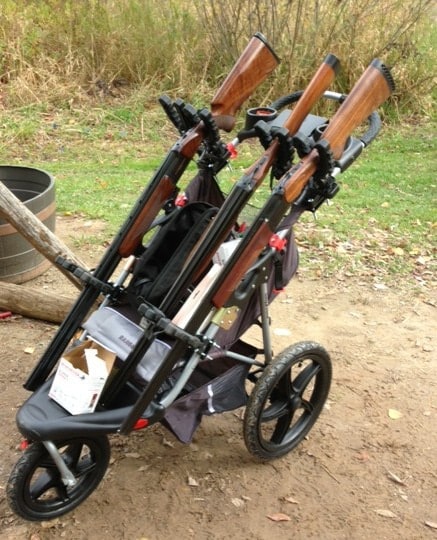 This DYI gun cart easily holds four guns, barrel down, as well as ammo and gear. The jogging stroller base allows it to travel over uneven terrain with ease. (Photo: Kristin Alberts)

Our particular carts list a safe weight load of 50 lbs, though I know we have safely exceeded that when packed up with ammo and gear. Common sense goes a long way in loading these things. Keep those gun babies safe. By the way, the hideous baby logos are easily covered up with, say, Browning or Benelli stickers.

If you prefer to purchase 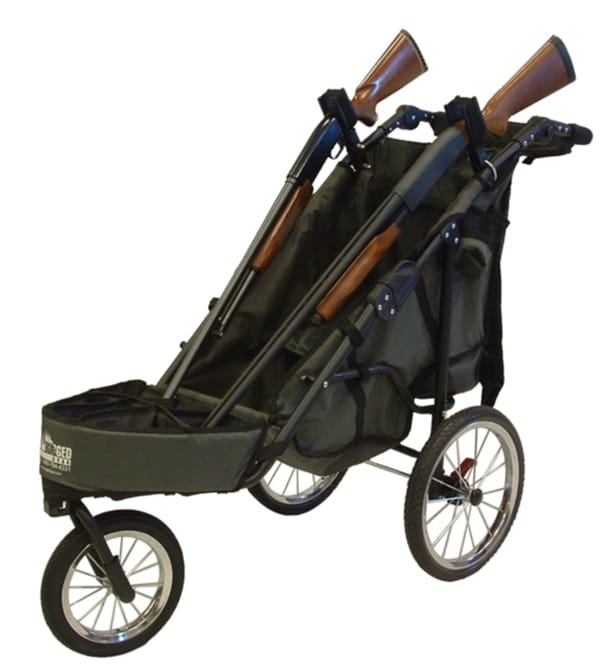 If you prefer to purchase than build, then the Rugged Gear company is really the way to go. With variations on two, three, and four-gun carts, they cater to the needs of serious shooters. Their gun mounts are well padded and secure, and the carts wide wheel base make them solid. Things like built-in cup holders and shell bags are much appreciated creature comforts. Wherever you see gun carts, you’re likely to see a couple made by Rugged Gear. Accessories like archery holders, gear bags, and shell trays are available options. The basic two-gun carts are priced $229-259. Three-gunners are $259-299 and four-gun models run from $419-479.

For the most part, Rugged Gear carts are pretty well built and can serve many users for years. If the cost doesn’t bother, and you really don’t want to put out the time and effort to DIY, then by all means check out Rugged Gear. Before we get all up-in-arms about the price of the Rugged Gear carts, lets suffice it to say that these carts are quite simple to build, and the cost savings are well worth the small effort of gathering the necessary items. We put less than $100 into each of our 4-gun haulers.

The arts and crafts of the Gun World

While we took the easy route of basic customization with simply bolting on the atv gun holders, there are many examples on both the net and local shooting courses of genuinely building your own gun holders. No matter how you go about it, having a dedicated gun cart is a pretty cool way to travel the shooting circuit. And if one of your shooting buddies starts to whine on the clays course, you can always threaten to strap him into the gun stroller.