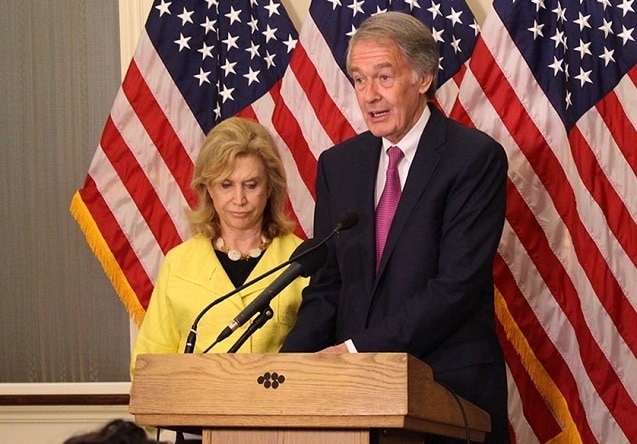 Resurrected are the Handgun Trigger Safety Act, which mandates a move to user-authorized or personalized handguns, commonly referred to as smart guns and a bill that would add $60 million in funding to the Centers for Disease Control and Prevention (CDC) to study gun violence as a health care issue.

Both of these partisan measures were introduced by the same legislators in February and May of last year respectively, to little interest on Capitol Hill.

However, coupled with the perceived momentum of National Gun Violence Awareness Day, marked by the Wear Orange campaign, lawmakers are fishing for more support the second time around despite significant GOP gains in Congress last fall.

“The epidemic of gun violence in America is not preordained, it is preventable,” said Markey in a statement. “In the 21st century, we should use research and advances in technology to our advantage and save lives from tragic and needless gun violence. These bills will keep guns out of the hands of those who shouldn’t have them and provide better information about what is causing gun violence and what can be done to prevent it.”

The smart gun bill, termed the Handgun Trigger Safety Act of 2015, mandates that within five years of it becoming law only personalized handguns must be sold. Further, within 10 years, traditional handguns would have to be retrofitted to comply with the act.

Markey introduced a similar measure last year alongside a poster of the Armatix iP1, a $1,800 .22LR pistol that used a companion RFID-equipped watch that had to be within a few inches of the handgun to fire.

What is different this year is that German-based Armatix, its president ousted and the company in Chapter 11-style restructuring with a warehouse full of unsold pistols, was not mentioned in the rebooted legislation’s debut.

Further, the legislation, although authorizing grants to help advance the technology – seen by many in the firearms industry as immature – would seem to be counterproductive due to its mandate. In recent months, lawmakers in New Jersey and California have sought to restructure smart gun laws to help coax development by removing the “stick” of an arbitrary mandate to exclusively use the technology on handguns moving forward.

Representatives of firearms trade groups advise they have nothing against the technology, but do take issue with laws such as the one proposed Tuesday that would force it on the market.

“Our industry has never opposed the research and development of authorized-user recognition equipped firearms,” Lawrence Keane, senior vice president and general counsel of the National Shooting Sports Foundation, told Guns.com Wednesday. “We join, however, with the developers of this emerging technology in opposing ‘one size fits all’ mandates.”

Keane feels that gun owners should be free to decide whether to purchase a user-authorized firearm based on their own needs, not because it’s the only type allowed for sale.

“We believe the free market should be allowed to function. If the significant technological challenges to developing a safe and reliable authorized-user recognition equipped firearm can be overcome, and there is sufficient consumer demand, the market will respond,” he said.

Keane also pointed out that personalized handguns, once they hit the market, are but a single option in making a firearms safe and that the industry has already made great strides to promote proper storage of unattended guns.

“A safe and reliable so-called ‘smart gun’ would simply be one way to make a firearm inaccessible to unauthorized users, but there are many other equally effective means,” Keane said. “Manufacturers voluntarily provide free locking devices with each new firearm they ship from their factories. Fortunately, firearm accidents continue to decline to new historic lows according to the National Safety Council, all while firearm ownership has continued to increase.”

Also recast is an effort to appropriate some $60 million for the CDC to fund research on ways to reduce gun violence and improve gun safety.

“Some would have us believe that the laws currently on the books are sufficient to address the tens of thousands of gun related deaths that occur each year,” Maloney said Tuesday. “A few extremists even oppose basic public health research to help us understand why gun violence has reached epidemic proportions.”

The proposed legislation would provide $10 million per year to the agency for a term of at least six years beginning in 2016. The money would be added to the CDC’s budget and, if approved, it would be the largest funding for federal gun use research since a 1996 bill limited allocations.

Such research had been largely defunded for 17 years until President Obama’s January 2013 executive order restored it. This order lead to the National Institutes of Health that year publicly requesting research projects on the topic for funding consideration.

The CDC peeked into gun violence as part of a White House by executive order following the mass shooting at Sandy Hook Elementary in Newtown, Connecticut, but its results were surprising to gun control advocates.

The final study found that defensive gun use was common, while mass shootings were not. It was also discovered that when guns are used in self-defense the victims consistently have lower injury rates than those who are unarmed, even compared with those who used other forms of self-defense.

Both the smart gun and CDC funding bills have been introduced by Maloney into the House and referred to committee with Markey expected to introduce companion proposals to the Senate in coming days.