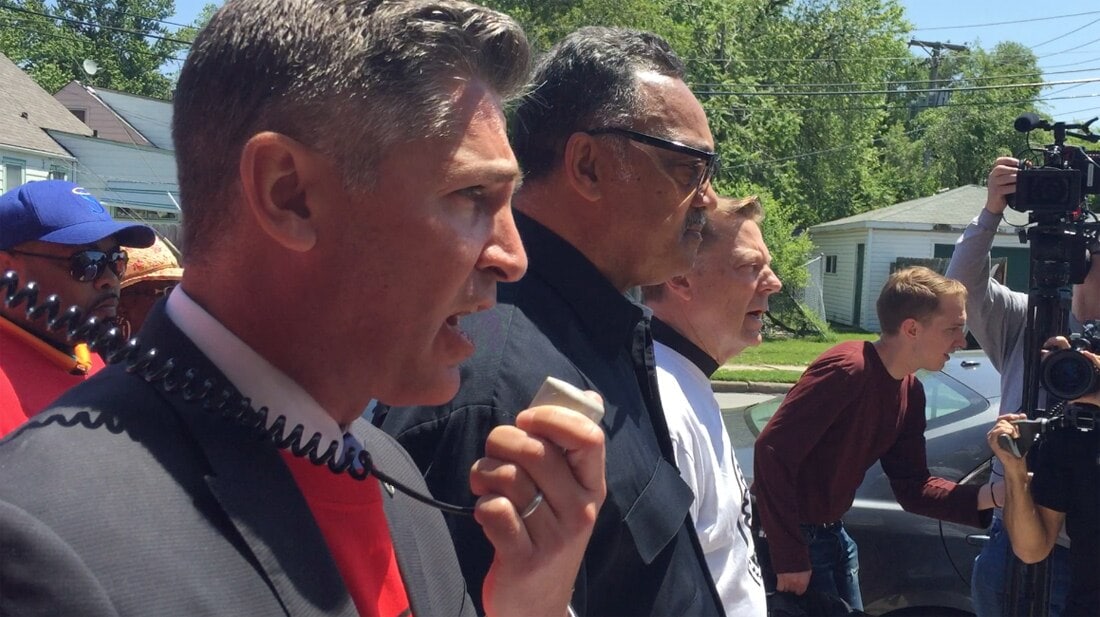 The reverend joined the Brady Campaign’s initiative “Stop Bad Apple Gun Dealers” this morning outside of Chuck’s Gun Store in Riverdale, Illinois. The store has been targeted by gun control advocates for its proximity — just 20 miles south of the Windy City nearby the Indiana border — and past studies have traced roughly 20 percent of crime guns found in Chicago back to the store. Chuck’s was the subject of a Brady protest in September when the initiative launched.

Although Brady and Jackson have protested the shop numerous times before — Jackson was even arrested once with Chicago activist, who attended today’s event, Father Michael Pfleger — today they aimed to get the store’s owner, John Riggio, to sign Brady’s code of conduct for preventing straw purchases.

The demonstration kicked off at 10 a.m. Protestors gathered in a plot of empty land that sits outside the shop. A chainlink fence separates the plot from the building. In the alleyway supporters of Chuck’s gathered and they were also equipped with yellow shirts and yellow signs.

Twenty-four minutes after 10, Brady’s president, Dan Gross, asked the group of more than a hundred protestors start marching in the plot. He advised them to walk in groups of three and reminded them not to confront Chuck’s supporters. They chanted, “Our kids die, Chuck’s doesn’t care!” and “The guns are traced to Chuck’s.” 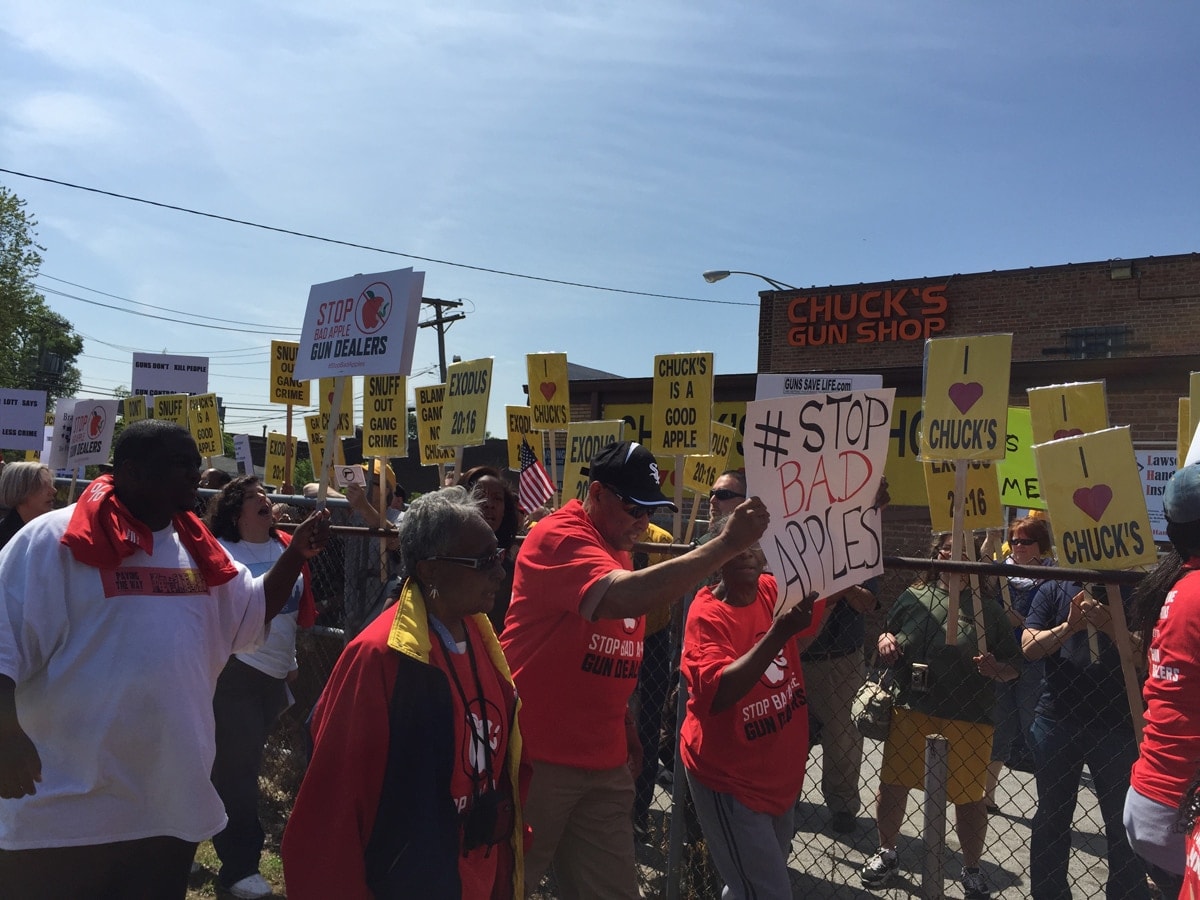 As they marched, Chuck’s supporters shouted back, some chanted, “March in the hood” and “Raise your kids.”

After 20 minutes, Gross asked they come back and he opened the mic for gun violence victims to tell their stories. Many had tragic tales of family members whose lives were cut short. A woman discussed her daughter and granddaughter killed by an ex-boyfriend. Another woman, whose child was killed with a gun traced back to Chuck’s, claimed at night the store owner opens the back door for unscrupulous gun deals. “A bag of cash for a bag of guns,” she said — a line later repeated by Gross. 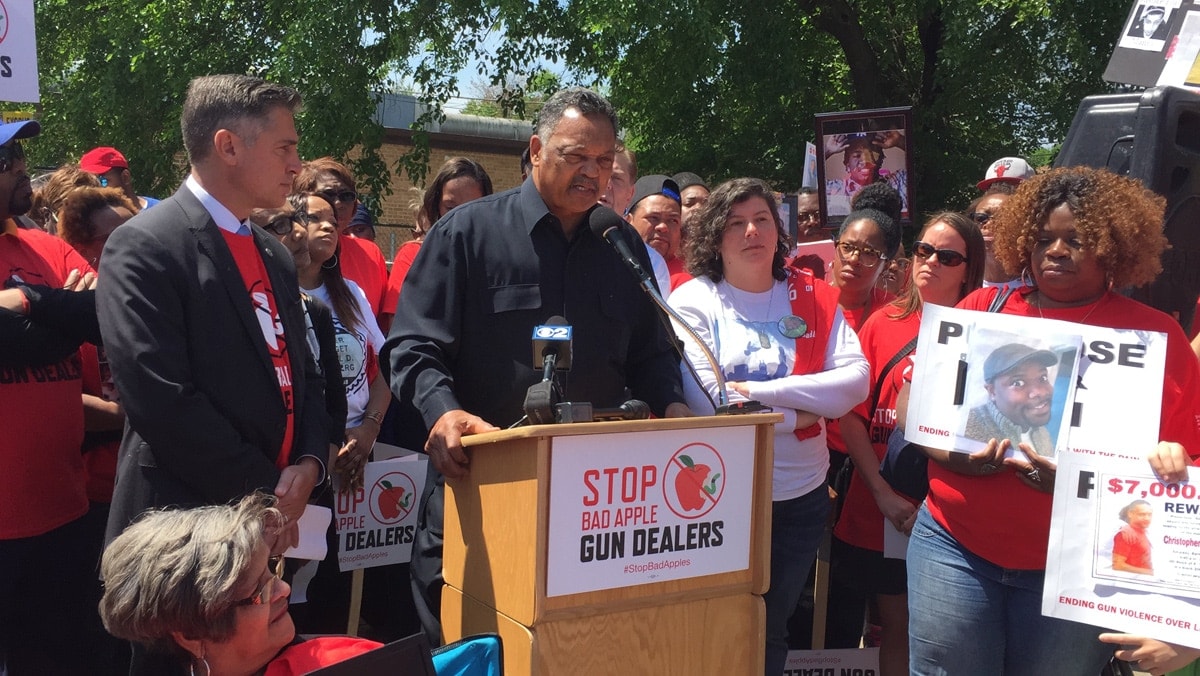 The Rev. Jesse Jackson led the formal speeches during the protest outside Chuck’s Gun Shop in Riverdale, Illinois, on June 6, 2015. (Photo: Daniel Terrill)

During the testimonials, a young man appeared with Chuck’s supporters. He shouted incessantly about President Obama killing children in Yemen with drones, the botched sting operation by federal law enforcement, Fast and Furious, and begged protestors to debate him about the topics he introduced. For a short while he was given a megaphone.

By 11 o’clock, Chuck’s supporters seemed to dwindle as the Brady group huddled for speeches. Jackson arrived along with Pfleger.

Gross introduced Pfleger, who opened by blaming Chuck’s, the National Rifle Association, and gun manufacturers for the violence and death on the streets of Chicago.

“No, I’m not a gun grabber, I’m a life lover!” Pfleger said, reading a speech scribbled onto a folded sheet of paper. “And I love life more than the death that they’re perpetrating. I’m just tired — tired of the NRA — tired of them prostituting themselves and buying politicians in this country. I’m tired of gun manufacturers and John Riggio from Chuck’s making money off the blood running down our streets and our children laying in cemeteries.” He later suggested that firearms should have a title like a car.

He spoke of women and mothers playing a powerful role in society, even in the times of Moses and later Jesus. After 50 seconds, he led another chant.

“When women. Stand up. And choose marching. Over mourning. When women. Choose graduations. Over funerals. When women. Are willing to go to jail. For a righteous cause. They change our minds. They touch our hearts. In a different way. When we come together. We cross lines of race. And gender. And religion. And find common ground.”

He claimed Illinois is number one in the manufacturing of guns and according to Chicago’s top cop, Garry McCarthy, “one gun a day — one kill a day — comes from the guns from this shop. They sell them ‘legally’ and ‘illegally’ in so called straw purchases,” Jackson said.

The protests gathered tightly around the speaker while in the surrounding area Chuck’s supporters quieted down and talked among themselves. 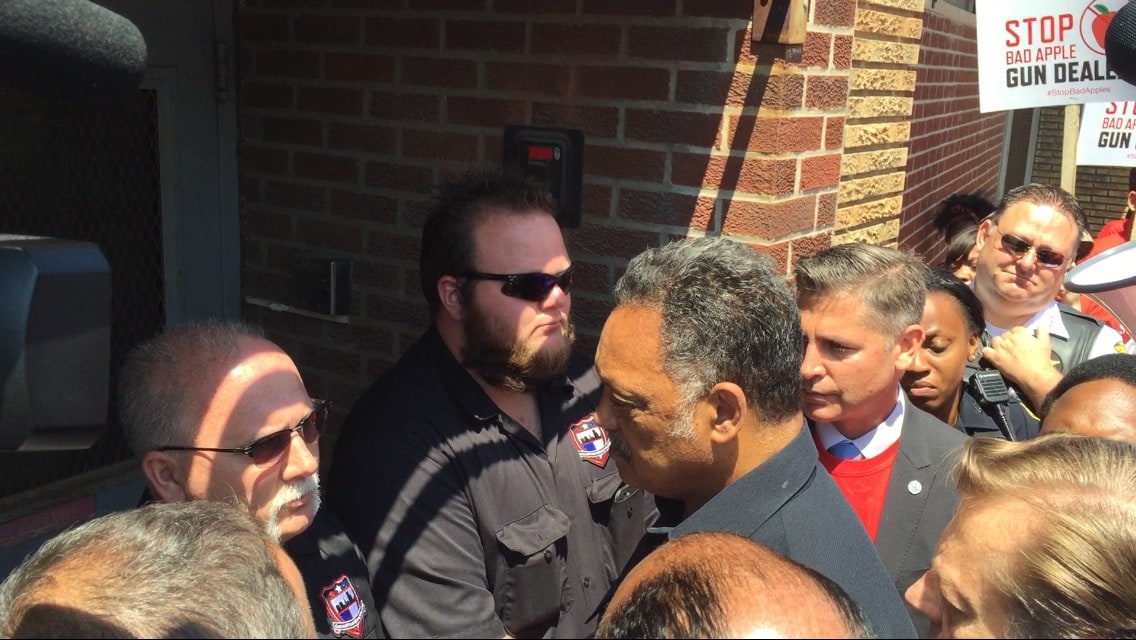 For the better part of 20 minutes the Rev. Jesse Jackson waited to see the owner of Chuck’s Gun Shop in Riverdale, Illinois, on June 6, 2015. (Photo: Daniel Terrill)

About a quarter to 12, Brady prepared their march to the front door of Chuck’s. The store’s supporters closed the fence blocking the alley and lined up along the chainlink. Cameramen rushed to the front of the protest to film Jackson, Pfleger and Gross leading the protestors who shouted “stop selling guns that kill our kids!” They stopped at the front door that was blocked by two men who work at the shop. The gate covering the front windows were closed two-thirds of the way. 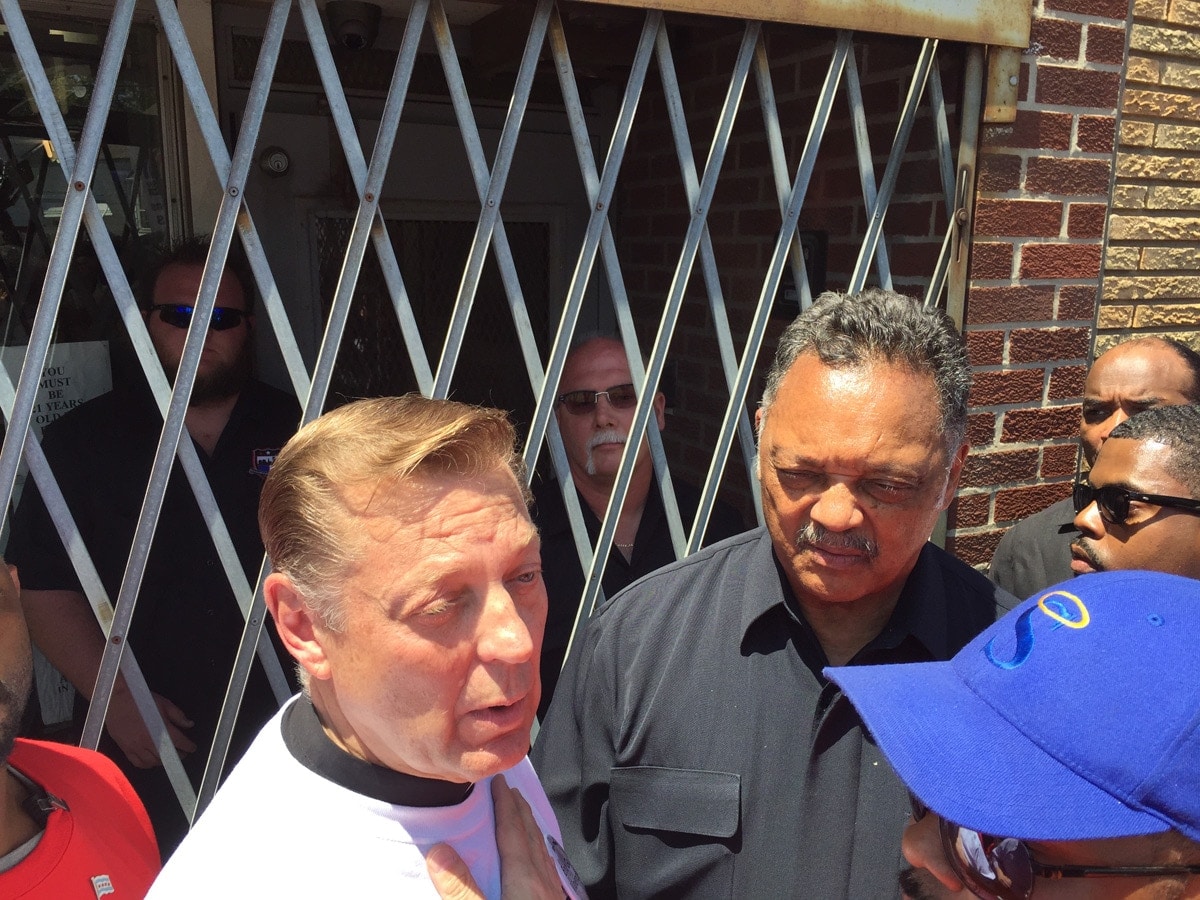 After the owner, John Riggio, of Chuck’s Gun Shop stepped out to talk to the group, store employees closed the gate completely on June 6, 2015. (Photo: Daniel Terrill)

Jackson stood square with the older man with a mustache. The two men informed the group that they need a Firearm Owner Identification Card to enter the store — something they would later regret. They also told them that the owner was not in.

Several protestors brandishing their FOID card made their way up front, but the men denied them entrance. Shortly thereafter a young woman asked if she could enter. She showed her FOID card and passed through. Pfleger asked to fill out an application for a FOID because he heard you could do that there.

When the men were asked why she was allowed to go in, they then said that they closed for lunch.

“The white lady can go in, but they can’t go in. Is that what you’re saying? So they just closed for lunch,” Pfleger yelled.

For 20 minutes they talked in circles under the hot sun, almost a dozen videocameras and countless cell phone cameras. The protestors filled the sidewalk. Every once in a while they’d spill off onto the street where a police officer asked that they get back on the sidewalk, which they agreed.

From outside the store looked dark, but people stood on the inside. A pair stood at the front window and a handful of others stood behind the counter. They all watched the protest outside.

Then Riggio, the shop’s owner, stepped out the door. From behind his two employees he told Jackson, Pfleger and Gross that they need a FOID card to enter and that you have to apply online for one. For the ones with a card, he said they’re having lunch and they’ll be done by 2 p.m.

Tensions eased and a Brady helper announced that the buses were getting ready to roll out. Jackson closed the protest with a prayer.