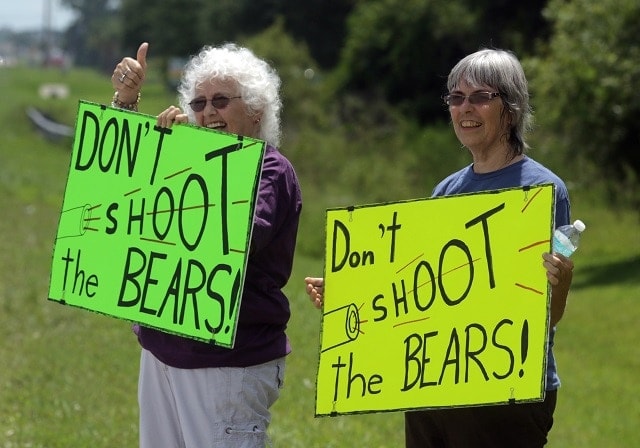 The Humane Society of the United States on Monday called on Gov. Rick Scott (R) to stop the upcoming vote by the Florida Fish and Wildlife Conservation Commission on resuming bear hunting.

The organization delivered a 90,000-name petition to Scott in efforts to derail the Commission’s vote scheduled to take place this week at an annual meeting in Sarasota. The anti-hunting group, who spearheaded a failed effort last year to curtail bear hunts in Maine, terms the potential Florida season a “trophy hunt” and has vowed to stop its implementation.

“This is the battle, not the war, we’re going to keep opposing this,” Laura Bevan, the Humane Society’s southern regional director, told the News Service of Florida.

The FWC also will consider a plan to issue depredation permits that would authorize a landowner to remove bears under certain circumstances if they are causing property damage.

Even so, animal rights advocates are predicting this week’s vote could produce a slaughter.

“When it (the season) starts, every hunter that paid their $100 for in-state (permits) – or $300 for out-of-state – is going to flood into the woods of Florida and kill bears,” Bevan said.

However, state officials take exception with the group’s categorization.

“There is a misconception circulating that suggests the reinstated bear hunt would be nothing more than a ‘trophy’ hunt,” said Nick Wiley, a certified wildlife biologist and executive director of the commission, in an email to Guns.com Monday. “The primary purpose of a limited bear harvest is to manage the bear population while providing carefully regulated hunting opportunities, and the proposed hunt has been aligned accordingly.”

Wiley decried the terminology used by anti-hunting groups and others in dealing with a bear season as social engineering.

“The term ‘trophy hunt’ is being used to question, if not impugn, the motives of individuals who may choose to participate in a bear hunt,” he said. “This term is being used erroneously in an attempt to influence public opinion against bear hunting and hunters because polling suggests many Floridians support legal and ethical hunting while the term ‘trophy hunt’ can be used to exploit or confuse the views of the uninformed.”

Wiley contends that state biologists have seen an explosion in the native bear population and that, rather than trophies, the rule structure proposed prohibits the wanton waste of any harvested game, and any fees derived from bear hunting permits will help fund further bear conservation efforts.

“It can be a struggle to get our arms around the fact that the Florida black bear represents a great conservation success story in Florida, and we need to transition from saving bears to managing bears,” Wiley said.

Gun rights advocates in the Sunshine State echo the comments by conservation authorities.

“We support allowing the Florida Fish and Wildlife Conservation Commission to manage wildlife using time-tested and proven methods of controlling the populations of dangerous wildlife predators,” Marion Hammer, president of the Unified Sportsmen of Florida and past president of the National Rifle Association, told Guns.com. “Their job is manage wildlife efficiently and effectively, not listen to the political views of those anti-hunting groups who would abolish hunting and, if they could, the FWC as well.”

Hammer, likewise, took the anti-hunting groups to task in their anti-bear hunting campaign as Florida residents are being subject to dangerous bear attacks at unheard of rates.