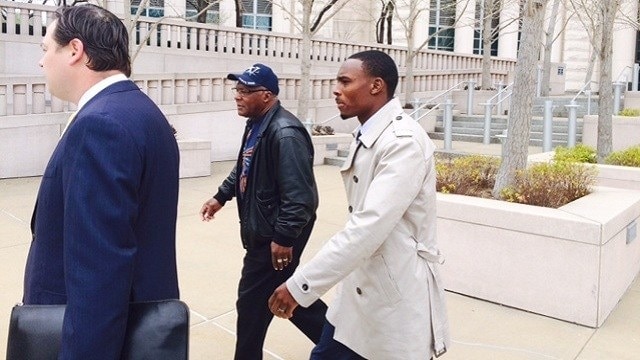 Former St. Louis cop Don McGhee, overcoat, was given a two-year sentence this week by a federal judge. (Photo: KMOV)

This week a federal judge sentenced former St. Louis Metropolitan Police Officer Don McGhee to two years in prison for giving a firearm to known drug dealers to assist them in their work.

The sentence, decided by United States District Court Judge Audrey G. Fleissig on Tuesday, came three months after McGhee, 28, pleaded guilty to one felony count of conspiracy to possess a firearm in relation to a drug trafficking crime. When originally indicted earlier this year, he faced as much as 20 years in prison and fines up to $250,000.

U.S. Attorney Richard Callahan stated the case proved the St. Louis City Police Department had the will and the integrity to investigate wrongdoing within its own Department. Callahan noted in a statement that STMPD initiated the investigation that led to McGhee’s arrest in March.

According to court documents, McGhee, while working as a police officer, associated with a known drug dealer who stored both crack cocaine and marijuana at a drug house on the 3800 block of Cottage Avenue in St. Louis. McGhee took a pistol grip Mossberg 12 gauge shotgun and gave it to individuals at the crack house with the understanding they would use the weapon in their illicit work.

Just two days later, the shotgun was recovered from the Cottage Avenue location during a search warrant along with drugs, other weapons, and cash.

“He’s sorry for the embarrassment he’s cause the police department and the trust of the public that he’s violated,” said John Bouhasan, McGhee’s attorney, in April when the former officer pleaded guilty.

St. Louis Police Chief Sam Dotson has been working with federal agencies to complete the investigation.

“It really goes to the point when we find misconduct, when we find wrongdoing in the department, we’re going to address it,” Chief Dotson said.