Falling in love with 'The Angry Gun' (VIDEO)

I’ll never forget the first time I heard the ‘Angry Gun’. It was 2011 and my first time at the Green Mountain Boys Machine Gun Shoot in Eden, Vermont. I was still in the parking lot when I heard the resounding thunder of the HK-51.

I approached the firing line looking for the gun, expecting it to be a modified Browning .50 cal but instead found the noise maker to be not much bigger than an MP5. 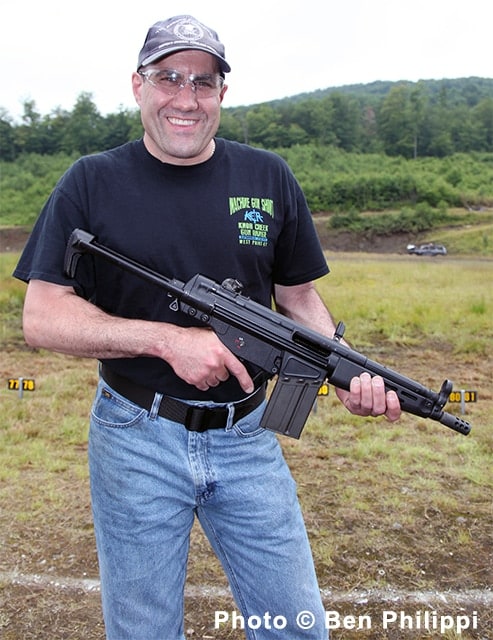 It’s bone rattling rapport is the result of twenty rounds of .308 exploding from an 8.75 inch barrel in a little over 2 seconds. Not only is it loud but it creates an enormous muzzle flash. Suffice to say, I fell in love with the ’51’.

I can’t help but imagine a team of Commandos storming a room full of bad guys and unloading their 51’s, cracking the walls and blowing out the windows and even if they missed every single shot, the sheer sound and muzzle blast would kill all the bad guys from severe heart attacks.

Four years later, the HK-51 is still my favorite machine gun to fire and watch, and thanks to generous and friendly firearm owners like Brian Pandiscia from Connecticut, I’ve fired it many times.

At this year’s Green Mountain Boys Machine Gun Shoot in Eden, Vermont, I asked Brian to tell me a little bit about his HK-51.