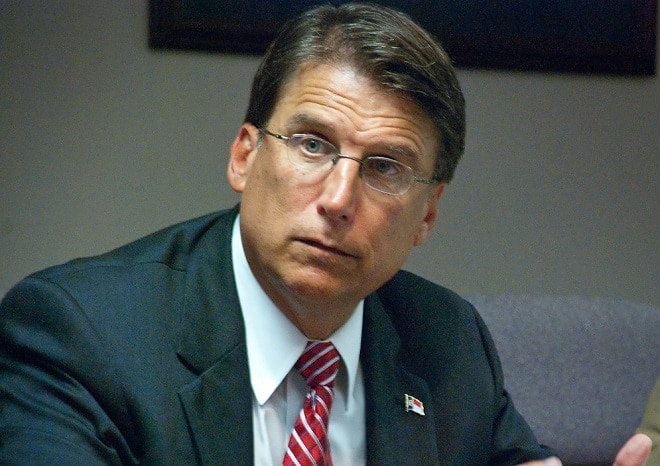 Gov. Pat McCrory (R) will soon consider a package of gun reforms sent to him by state lawmakers. (Photo: Wikipedia)

An omnibus pro-gun measure met with bi-partisan approval in the North Carolina Senate Monday and is on its way to Gov. Pat McCrory for signature.

The bill, introduced in April, passed the House by a 78-37 vote last month before winning a 40-9 approval from the Senate this week that included a number of chamber Democrats.

While many concerned said it’s not an ideal bill, it still contains a number of reforms.

The measure, HB 562, as originally introduced was sweeping in scope but caught flak from the governor’s office, law enforcement lobby groups, gun control organizations and chamber Democrats over its three-month trek through the legislature.

As introduced, it repealed the state’s Jim Crow-era permit-to-purchase scheme, expanded concealed carry to legislators at the Capitol, prohibited health care workers from asking questions about gun ownership, introduced a 15-day window for Chief Law Enforcement Officers to either approve or deny applications by individuals to obtain National Firearms Act items, and other minor reforms.

However, the language referencing the permits, the concealed carry expansion, and medical privacy was carved away by amendments in the House, leaving the bill a shell of its former self.

In the end, should McCrory sign the measure, it will bring the CLEO shall-sign reform, allow guns in school parking lots for concealed carry permit holders, streamline the permit application process, grandfather existing shooting ranges against new local regulations, remove the restriction against using a short-barreled rifle (SBR) for hunting, and strengthen the state’s preemption laws.

Some court personnel, to include district attorneys, would be allowed to carry concealed firearms while court is in session.

It would allow the Commissioner of Agriculture to continue the controversial ban on carrying concealed firearms on fairgrounds during the state fair.

“It is going to be tough for me, but at the end of the day I have to support this bill,” said Smith-Ingram.

The National Rifle Association and Grassroots NC, a major state Second Amendment advocacy group, supported the final measure although the latter expressed concern that it should have been much stronger.

“HB 562 is moving forward, restoring more gun rights and correcting some of the anti-freedom legislation the Democrats burdened us with,” read a statement from the Grassroots NC. “It also helped expose several ‘Republican’ House members who are genuine RINO’s.”

The legislation now heads to Gov. Pat McCrory, a Republican, who has already signed pro-gun legislation into law this session.