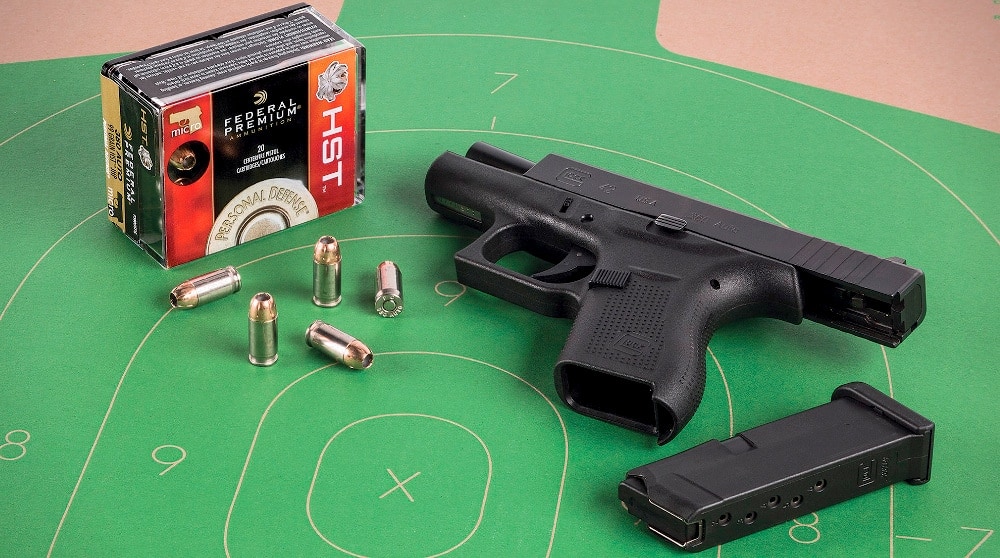 The HST bullet is a hollow point that uses a cannelure to bind the copper jacket to the lead bullet core to prevent jacket separation and predictable expansion, unlike many other self-defense loads which use bonded jackets. The design of the bullet has been tuned and optimized for short-barreled handguns, which is common in the world of .380s.

Federal tested the cartridge with a subcompact with a 2.75-inch barrel and the HST load beat the spread by a decent amount. The cartridge reached 1,030 feet per second at the muzzle, pushing a 99-grain bullet to make 233 foot-pounds of force, which is about 10 to 20 percent hotter than a lot of commercial self-defense loads out there.

The hollow point cavity is designed to expand even filled with cloth or debris and the mechanical fit should provide as much weight retention as possible to ensure positive expansion and adequate penetration. Combined with the high velocity and bullet mass this new HST load ticks all the right boxes.

A lot of .380 ACP cartridges are on the soft side, developed for use with small, snappy blowback pistols. But as locked-breech designs like the Glock 42 become more common there’s no reason not to crank up the power, particularly with loads intended for self-defense.

The cartridge is priced in-line with other premium self-defense loads at $25 for a box of 20 with real-world pricing in the $17 to $18 range. Federal’s already put the new ammo into distributor hands and it is available online and locally across the U.S.

As always, new loads will require independent testing before they can be universally trusted, but with Federal Premium’s HST we’re really looking for confirmation of this round’s promised performance. Other HST rounds have set a solid standard and we expect the same from it in .380 ACP.