LaRue Tactical is getting into the suppressor game with a new multi-caliber design rated up to .308 Winchester/7.62 NATO. It’s an affordable design with one standout goal, to reduce backpressure, reducing the amount of gas sent back to the user.

The solution is the TranQuilo, a suppressor built for LaRue’s acclaimed and proven 5.56 and 7.62 NATO AR-type rifles. While all semi-automatic rifles exhibit gas blowback when running conventional suppressors, ARs are particularly prone to it, using direct impingement gas operation.

To keep smoke out of your face, LaRue said the TranQuilo channels gas away from the bore to bypass the main hole through the suppressor in order to make it more difficult for gas to escape backwards towards barrel after the bolt unlocks.

In LaRue’s video the amount of gas blowback looks significantly reduced, and even if that’s an extreme example of the TranQuilo’s gas-busting performance, it will make a lot of shooters happy. It’s not completely eliminated but it doesn’t look much thicker than shooting unsuppressed. 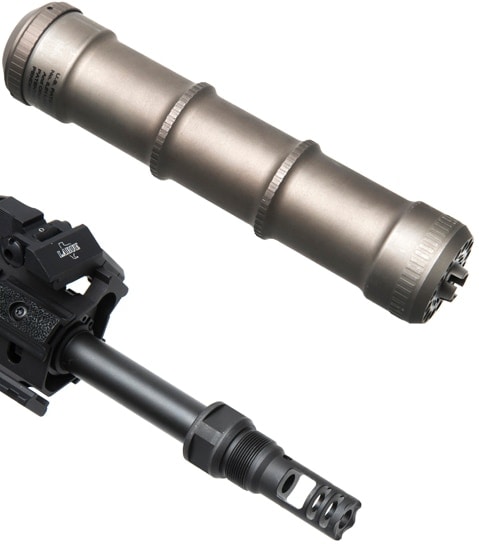 The suppressor is rated to reduce noise by about 30 decibels suppressing 7.62 NATO. Independent testing will determine how it actually performs in the real world against other new multi-caliber suppressors like the Gemtech One and SilencerCo Omega. Performance can vary depending on the rifle and cartridge used.

The TranQuilo is CNC machined from 17-4 stainless steel and Incoloy A-286, a “superalloy” designed for strength at a wide range of temperatures as well as corrosion and oxygen resistance. It’s a beefy can, measuring in at 8 inches long with a variable outer diameter that’s 1.75 inches across at the widest points.

It weighs 23 ounces, which is on the heavy side compared to some suppressors, but there are plenty of people who would trade a few additional ounces in exchange for the reduction in backpressure.

The TranQuilo uses a simple mounting system that threads directly on the muzzle adapters. Two shoulders center and align the suppressor to the bore and prevent gas from fouling the threads, minimizing chances of the can seizing onto the mount.

A captive locking nut screws in from the rear to keep the can from walking off the host gun, and the endcap acts as a small flash suppressor to take care of any residual flash exiting the muzzle. LaRue offers two mounts for the TranQuilo, toothy muzzle brakes threaded for barrels with 5/8-24 or 1/2-28 muzzle threading, which is the vast majority of 5.56 and 7.62 NATO rifles.

While the TranQuilo’s main selling point is its reduced backpressure, a lot of people will like it because of the sticker price. LaRue has set the MSRP at $699, which is hundreds of dollars less than other big-bore quick-detach suppressors. Even the muzzle brakes are affordable at $99, or just $50 when purchased with a TranQuilo directly from LaRue.