Self-defense inside the home: Avoiding over-penetration

Decisions, decisions, decisions… it seems like when it comes to defending your family there is a lot of them. Caliber, type, make, model, ammunition, stopping power, capacity, training, and the omnipresent legal repercussions—self-defense is a hailstorm of life or death choices and another one of these (and one that is often neglected) is over-penetration.

Situation and terrain determine tactics and nowhere is this more evident than when firing a gun inside a closed environment like your home. Accordingly, a self-defense minded gun owner needs to first take into account where he lives (suburban house, farm, studio apartment etc.) and then assess the location and materials used in its construction. These factors will help determine your choice of gun and round you keep for home defense.

Factoring in location and terrain means knowing where targets will appear, potential backstops and beyond them. Since most inner walls in homes in western societies are made of sheet rock and many outer walls made of brick or siding, it’s important to realize rounds could leave your home and keep traveling. Thinner than usual walls, glass windows or close neighbors should all play a part in your assessment of your home as should the sometimes strange angles and backstops inherent to ranch style or multi-level homes.

Remember, firefights are dynamic with people moving about helter skelter and this may include your children, so it is important to be aware of the location of spots where over-penetration can: a) occur and b) injure a friendly target. Practice identifying these places with your family with both the lights on and off; most home invasions occur during the daytime, but they also happen in the early morning and evening too. This underlines the importance of knowing and remembering your backstops and beyond.

Is bigger better when it comes to self defense ammunition?  I think that even novices would agree that it depends on if bigger is appropriate. So, how do you know what’s appropriate? Well, in a nutshell, by understanding the round/guns’ ballistic profile. 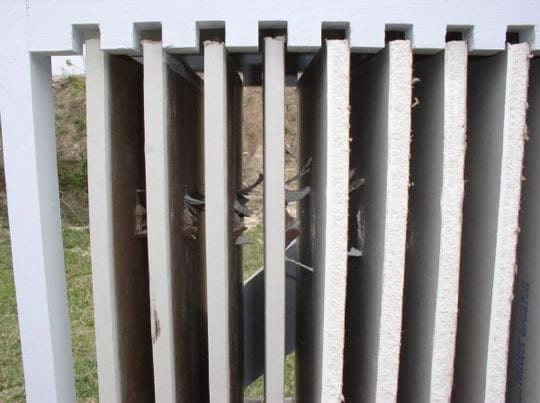 9mm (especially ball or target ammunition) can penetrate many layers of drywall.

Ballistics is the study of projectiles and represents a discipline in shooting that can quickly turn into a private obsession creating scientists out of hobbyists. Indeed, understanding the ballistics of a round is the key to understanding the theory of shooting—but realize that theory is not practice and you don’t need an intimate knowledge of muzzle velocity and “knock down” power to make informed decisions about over-penetration.

Despite the popularity of the round, too few realize that 9mm ball ammo can easily punch through not just one but several interior walls. By contrast, .223 rifle ammunition tends to tumble, turn and slow down when penetrating barriers, even more than a 9mm fired from some pistols. Many shooters like to debate this point, and admittedly on the surface it doesn’t seem logical, but studies done by SWAT teams over a decade ago revealed this phenomenon to be fact and it was one of the main reasons a lot of tactical teams transitioned to M-4s/AR-15s and gave up the H&K MP-5 SMG in the 80s and 90s.

Speaking of SWAT teams, while most have gone to ARs, one big city team in has stayed with the 12-gauge as have most militaries around the world which says something to me about the effectiveness of shotguns. Using rifle slugs and/or 00 buck, a shotgun allows both for powerful stopping advantage and light penetration.

But I’m also hesitant to endorse shotguns as the universal cure all for home invaders as Vice President Biden recently suggested. A shotgun blast is not like the movies where people fly backwards or fall down right away. One shot doesn’t necessarily mean one kill. Consider that your home invader may be high on PCPor some other drug. Tweaked out criminals can take a handgun round and keep going so take the time on the range to feel confident that you know what it is going to take to stop a human, which may mean a couple of shots.

There are also all kinds of handgun rounds out there—frangible rounds for instance—that promise to minimize penetration, mostly through projectile design.  This may well be, but remember over penetration with any type of ammo is a reality that cannot be ignored.

Tactics in the home

The key to defending your home and limiting penetration is to establish a point of domination. Assess your home and determine the likely entry points (mostly doors, 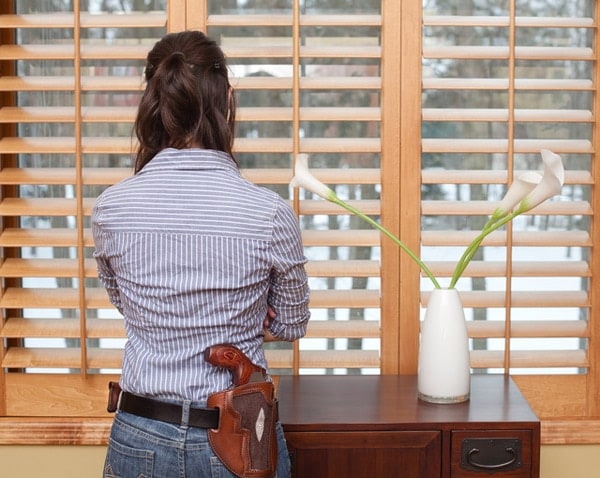 Always observe windows when assessing your home for a tactical advantage.

including the garage and sliding glass doors, and perhaps windows). From there determine a counterstrike strategy. Essentially, this means asking yourself, “Where’s the best location to fight from?” The best options are quality cover and concealment, good fields of fire, and excellent observation. On multilevel homes, high ground is preferred, especially when it gives a tactical advantage.

You also have to factor in how fast you can get to your weapon and get set up, covering the likely entry points of your home.  Realize that anywhere along the path to those weapons could turn into a battle zone. This is taking into account Murphy’s Law—you may have to fight from anywhere in your home, so consider observation, obstacles, and the other stuff mentioned above (e.g. fields of fire, cover and concealment) from less advantageous vantage points.

If the entry point in relation to the key living areas is really small (like in a studio apartment), the size of the gun will matter—big time. So, which gun should you pull? Will there be enough time? And what does it mean for penetration?

With buckshot, over-penetration is not a genuine concern. Chambering a round in a 12-gauge gives off a distinct noise however, that stirs much debate in the tactical community. Hopefully, home invaders will turn and run when they realize you have a firearm, but hope is not a good tactic and shouldn’t be relied upon, especially because, if it does not work, it will reveal your position. This could lead your attacker to change his or her attack plan which may change your anticipated battle zone. (Really though, the better question is will there be enough time to “rack” a round?)

Like shotguns, rifles are long, though best used from a set position. Choose defense rounds that are of .223 caliber or smaller if you are worried about overpenetration.

When considering the time it takes to level a rifle at a home intruder and give a verbal command that you will use lethal force, I suggest you have a young, fast friend sprint from the door to where you keep your long gun. That demonstration will make you think about where to keep your gun, if you can get to it in time and where the round will likely be heading if it passes through its target.

By far, the quickest option in CQB is the handgun. Hollowpoints and other frangible rounds tend to separate and tangent in your target, while ball ammo will pass through the target and potentially beyond. Caliber size is less important if you use these types of projectiles, so I suggest using ammunition specifically designed for defense against humans. Like the rifle drill, it’s a good idea to have a friend run to your weapon location to see if there enough time to grab, turn, point, and shoot.

Location and storage of weapons

If you haven’t picked up on it by now, where you hide your gun(s) matters. When an attack is imminent, you need to get to a weapon immediately and you may not have time to run into the bedroom, the office, the basement, or wherever you store your gun to retrieve it. 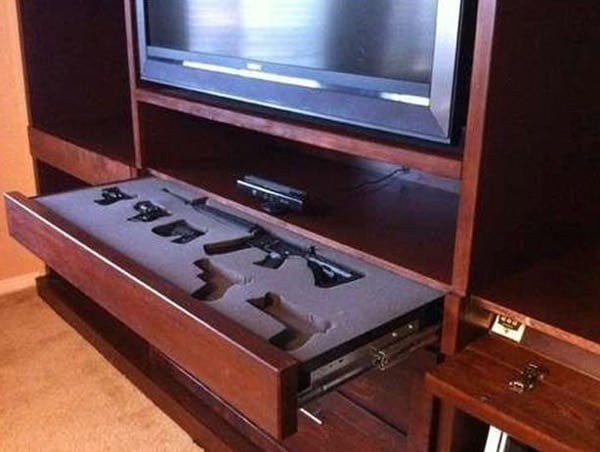 If you have several self defense weapons, why store them all in the same place?

Just think about this for a second—how long does it take you to open your giant safe with a twisting combination number lock?

Logic therefore dictates that the best option is to have multiple guns stored throughout the house so you can access them rapidly and as the situation changes. Quick access safes, hidden and secure locks are important in these situations. With kids or grandkids visiting, no homeowner should take the risk of having curious or ignorant children hurting or killing themselves or others because they did not take the time to secure their weapons. That would be too tragic and criminal.

Using a lock on the trigger, a digital pad lock or a cord through the action, can keep the honest homeowner safe from accidents and tactically prepared. Education for kids is also needed but teenage kids should know how to protect themselves while their parents aren’t home. In the end, keeping several guns all over the house is certainly the best option for the average home.

This article originally ran on Guns.com as “Self-defense inside the Home: Avoiding Over-penetration” on 2/27/2015 and has been edited for content.