As the “latest and greatest” rifle cartridges jockey for popularity, more and more wonder rounds of years past get relegated to “obsolescence”—at least the manufacturers would like you to think so.  Here are five calibers that are often overlooked but are just as capable as any cartridge out there to do the job they were intended to do: 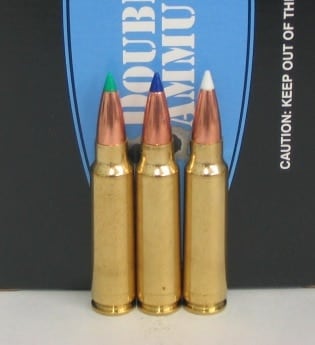 Savage introduced the .300 Savage in 1920 as a replacement for their .303 Savage round chambered in their Model 99 lever action rifle and why it has been lost in the shuffle is beyond me: it demonstrated better ballistic performance than a .30-30 Winchester with a 180 grain bullet traveling at 2,500 fps.

For decades the .300 Savage proved itself proficient on deer and even larger game, but when the .308 Winchester arrived (the design of which is actually based on the .300 Savage case) the new round, destined to become one of if not the most popular hunting round in North America, pushed its parent cartridge out of the limelight.

Still there are lots old Model 99’s out there and some bolt actions chambered in the .300 Savage.  Ammunition is still available and it can be readily handloaded. 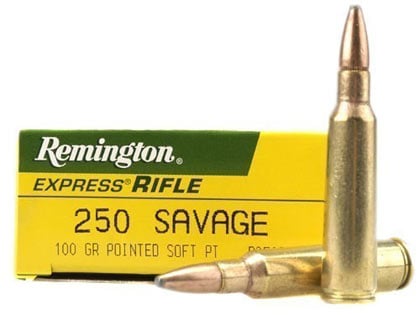 Because of the smaller case, the .250 Savage is said to perform optimally with 100 grain or less bullets.

Before the .300 Savage came .250 Savage, designed by lawyer turned shooter, Charles Newton, though you may recognize this punchy cartridge by another name, the .250-3000.

The round was called this because it could send an 87-grain bullet downrange with a muzzle velocity of 3,000 fps—pretty impressive in 1915. Model 99 Savage rifles were also chambered in .250 Savage and, using a larger 117-grain bullet, this combo was capable of taking whitetail deer.

The .250 Savage was a very popular cartridge but lost a lot of ground when the .25-06 and .257 Roberts were introduced. Today you can still find them but it is getting a bit harder to find factory ammo, a good enough excuse to take up handloading. 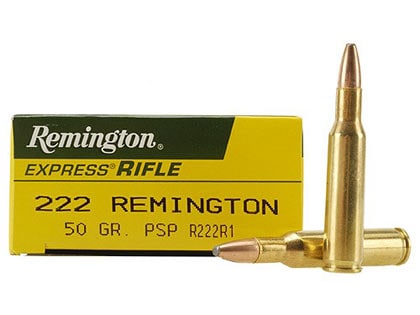 Though not as cheap as .223, .222 Remington is inexpensive and plentiful due to popularity overseas.

Ask ten hunters what their favorite varmint cartridge is and nine will probably tell you the .223 Remington.  There are however a few dedicated hunters who still use a round they call the Triple Deuce, otherwise known as the .222 Remington.

The .222 Remington made its debut in the Remington Model 722 bolt-action rifle. With a 40 grain bullet capable of 3,500 fps it was a natural when it came to taking varmints from woodchucks right up to coyotes and it proved a very popular caliber in the 1950s and ‘60s as it wore barrels out less than the competing .22-250 (also a Remington cartridge).

Today, rifles chambered in the Triple Deuce are getting harder to find although they are still out there if you’re up for a hunt.  Ammunition is actually very plentiful—to this day the .222 is still very popular in Europe. 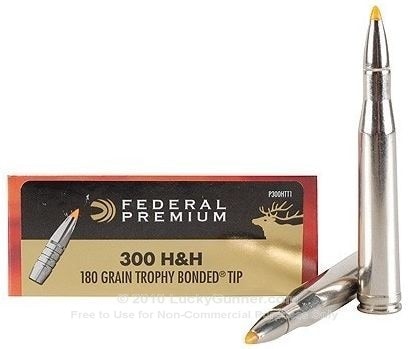 The .300 H&H Magnum has traditionally been a popular cartridge for African safaris.

The .300 H&H Magnum has been declared dead more times than Detroit and just like the Motor City this round’s performance and history is tenacity defined. Introduced in 1925, the .300 H&H won the 1000-yard Wimbledon Cup in 1935 and subsequently became a wildly popular big game caliber, boasting more power than the .30-06. Chambered in the Winchester Model 70 and several other bolt action rifles, it enjoyed an almost 30-year reign until the .300 Winchester Magnum stole its crown.

Regardless, a faction of big game hunters has never stopped chanting, “Long live the King.” In some circles the .300 H&H Magnum remains a very popular ammunition, despite the fact that it can be hard to find and quite pricey when you do.  For this reason, the .300 H&H is perhaps the classic all around big game caliber for US handloaders, capable of confidently taking any animal in North America. 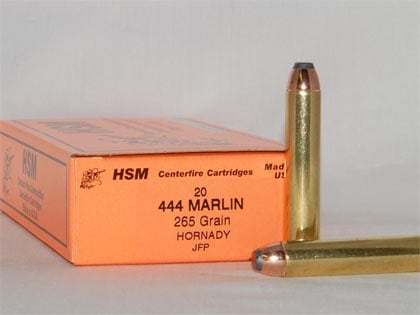 The .444 Marlin is frequently compared to the newer .450 Marlin.

In 1964, Marlin introduced a new big bore lever action round with little more reasoning than there were few out there in those days. The ones that did exist were not very popular.

The .444 Marlin was little more than a .44 Magnum case stretched out by one full inch to give it similar power to that of the old .45-70. Handloaders immediately found they had trouble with the cartridge; the bullets Marlin used were not getting the accuracy handloaders had hoped for. These reloading wizards soon determined the .444 Marlin worked better with bullets with a .432 diameter and not the more common .429 and .430 of the .44 Magnum.

Still, minute-to-deer hunters liked the .444 Marlin for its power—that is until the .45-70 Government was reissued and successfully planted its hooks in the hunting and cowboy action markets, dominated by large caliber lever rifles. Today though it can still be had, ammunition has become incredibly rare. It is still loaded by still-hunters who own rifles in this caliber (and know what the gun is capable of).

Calibers drift in and out of popularity for many reasons.  Some rightfully fell to wayside because of legitimate shortcomings but there are many, too many in my opinion, that have been lost to time or pushed out by some Johnny Come Lately round promising to do everything.  These cartridges can still get the job done right, every time, as long as someone gives them the chance.

There are far too many underrated cartridges to list here, so call out your favorite “obsolete” cartridge in the comments?

This article originally ran on Guns.com as “5 underrated rifle cartridges” on 1/30/2012 and has been edited for content.