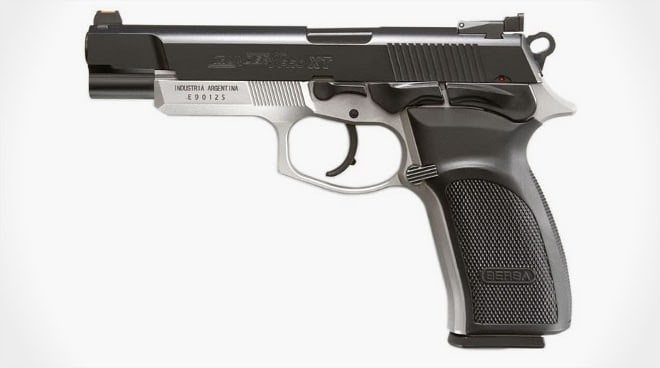 Bersa is unveiling a new “longslide” version of the popular Thunder 9 Pro, called the Pro XT. It was developed specifically for competition and includes a handful of features that make it race-ready out of the box.

The Pro XT’s slide is extended to 4.9-inch barrel, 0.7 inches longer than the full-size Thunder 9 Pro. It ships with a fiber optic front sight and a fully-adjustable rear target sight, and has an inverted two-tone look with an updated frame.

The aluminum alloy frame has a silver anodized finish to contrast deep black blued slide, barrel, controls and matching black checkered polymer grips. The frame doesn’t have an accessory rail. Instead the dust cover portion of the frame is left solid, which adds a touch of recoil mitigation, and reduces the number of corners to potentially snag on.

Instead the frame has small forward serrations that provide tactile feedback to shooters who place their trigger fingers on the frame when not shooting. These are especially nice for drills and rounds that start off with guns drawn. The frontstrap is also serrated for improved control.

With these changes the Pro XT weighs about 10 percent more than the full-size Thunder 9 Pro at just under 34 ounces unloaded, about halfway between your average polymer pistol and a steel-framed handgun. It’s a good weight that strikes a middle ground, offering some of the speed and handling characteristics of a lighter handgun with the the recoil reduction of a heavier metal-framed handgun.

Based on the standard service pistol, the Pro XT naturally comes with other features that any shooter can appreciate, whether they’re serious competition shooters or more casual range types, including ambidextrous slide catch levers, safety/decocker lever and a reversible magazine catch.

Like the Thunder Pro 9 the Pro XT is a double-action, single-action handgun, with a smooth factory trigger. Bersa is known for their above-average factory triggers with short resets and we expect nothing less with the Pro XT.

Standard capacity on these guns is 17+1 with optional 10-round magazines available. Right now the Pro XT is only listed in 9mm Luger. Hopefully Bersa has something in .40 S&W as there are many competitions that are tailored for the larger caliber.