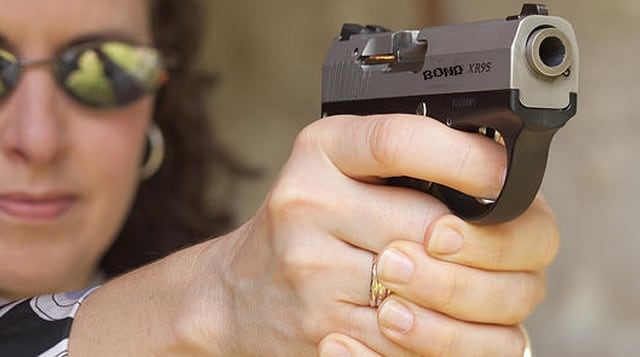 What will soon be the “Bondberg” pistol.

According to Nov. 6 announcement, the acquisition takes effect immediately. However, the transition will take a few weeks as Boberg operations relocate from Minnesota to Texas. Bond Arms will begin manufacturing, servicing and supporting Boberg products as early as January.

As Bond Arms owner told Guns.com, the acquisition was more serendipitous than practical. The company’s owner Gordon Bond said that he wanted to expand his company’s offering and the Boberg company had been up for sale for a year. He said he had looking for “something that had our flavor” and Boberg hadn’t yet found a serious buyer.

Boberg’s shtick is its design puts the action in the rear so it mitigates recoil of powerful loads and in turn offers more accurate shots. Bond said he liked the design but sees ways to improve it.

Bond said his goal for the Boberg pistols is to get the retail price below $1,000 and to add more appealing aesthetics like Rosewood grips, for example.

Even though Boberg launched in 2009 and released its first product run in 2011, the small company has yet to ship 1,000 guns annually. If Bond accomplishes his goals, he estimates producing roughly 5,000 to 10,000 Boberg pistols annually.

Being the much larger company with more capital and manufacturing capabilities, Bond has the capabilities to refine the already established Boberg pistol design.

A prototype of sorts should be ready next year, Bond said and he hopes to have it on display at 2016’s Shooting Hunting Outdoor Trade Show in January.