No one in their right mind would bring a knife to a gunfight. On the other hand, many gun owners have been known to pack a blade for those just in case moments. In the late 1990s, one company specialized in hybrid knife guns that packed an unseen punch. This punch, concealed in the grip of the knife, was a small revolver caliber round. That company was known as GRAD.

A Primer on knife pistols

Handguns with knives or bayonets have popped up frequently throughout firearms history. Such examples as the Elgin pistol, the Apache revolver, and others are well documented. These guns were just that: handguns that happened to have a knife or bayonet attached. Really, these weapons were guns that had a knife as a back-up weapon or tool, not the other way around. 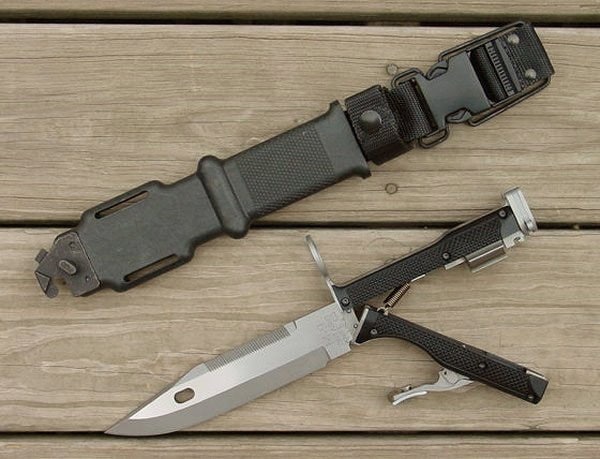 But, there is a similar evolutionary train of knives that have had guns attached to them. The main purpose of these devices was knife-first, gun-second. The user would have a strong, well-made knife for cutting, prying, or use as an edged weapon. The pistol came as an accessory attachment on the knife, reminiscent of Swiss Army knives that have many tools on them (only these knives had a gun instead of a pair of tweezers and a corkscrew).

Knife/gun combos have been more common than you may think. Back in the 1950s, Illinois-based U.S. Small Arms marketed and sold a folding pocketknife that held a single barreled .22LR along with its blade. In more recent times, the Powell and Brown Company of Tucson, Arizona marketed a long-bladed folding utility knife that concealed either a .22 or a .38 single-shot barrel. 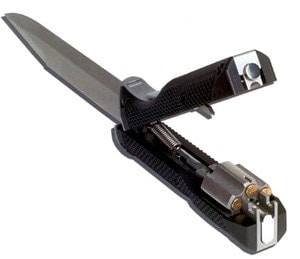 In the late 1990s, the Global Research and Development (GRAD) Company designed the world’s first production fixed blade knife that held a multishot firearm inside its grip.

GRAD produced four knives, three of which contained working 22LR double-action revolvers.  The knife in each case was a high-quality 440C heat-treated high carbon stainless steel single edged fixed blade. Inside the grips lay the cylinder for the revolver with a 1.75-inch rifled barrel. In the lower half of the knife handle a spring-loaded trigger lever could be pulled down and when depressed would fire the revolver.

The barrel’s muzzle was shrouded by the top half of the grip and fired over the top of the blade through the hilt of the knife. To load and clean the revolver, the grips separated and folded open, allowing access to the concealed gun.

Versions of the GRAD 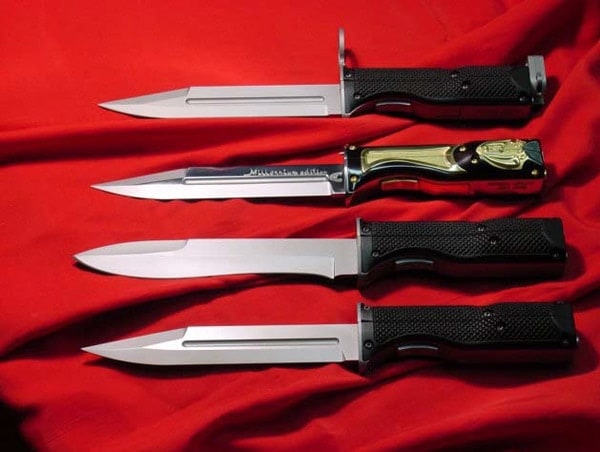 The Hybrid Standard Edition of the knife had black aluminum checkered grip panels and held a 5-shot revolver.  A deluxe 22-karat gold-plated Millennium version of the Standard had a highly hand polished blade and frame. The Hybrid Bayonet held a 6-shot revolver and mounted to the standard NATO bayonet lug carried on the M16/AR-15 style rifle. The bayonet version could be fired either mounted or unmounted to the rifle. The knife only version, the Model RS1N, was the base knife with no barrel or firing assembly.

Across all versions, less than a thousand of these weapons were made. The company history is murky; they seem to have folded around 2007 and as such have no warranty or production to fall back upon. The firearms versions are all NFA Class III and are transferable under the $5 Any Other Weapon clause. When new and still in production they sold from $699 for the Standard models to $1999 for the gold-plated series. Today if you can find one today, they basically worth whatever the market will pay and are rare at any price.

Of course, you can always just pack both a handgun and a nice blade for much less, but where’s the fun in that?

This article originally ran on Guns.com as “The GRAD Knife Gun: Your back-ups’ back-up” on January 21, 2013 and has been edited for content.