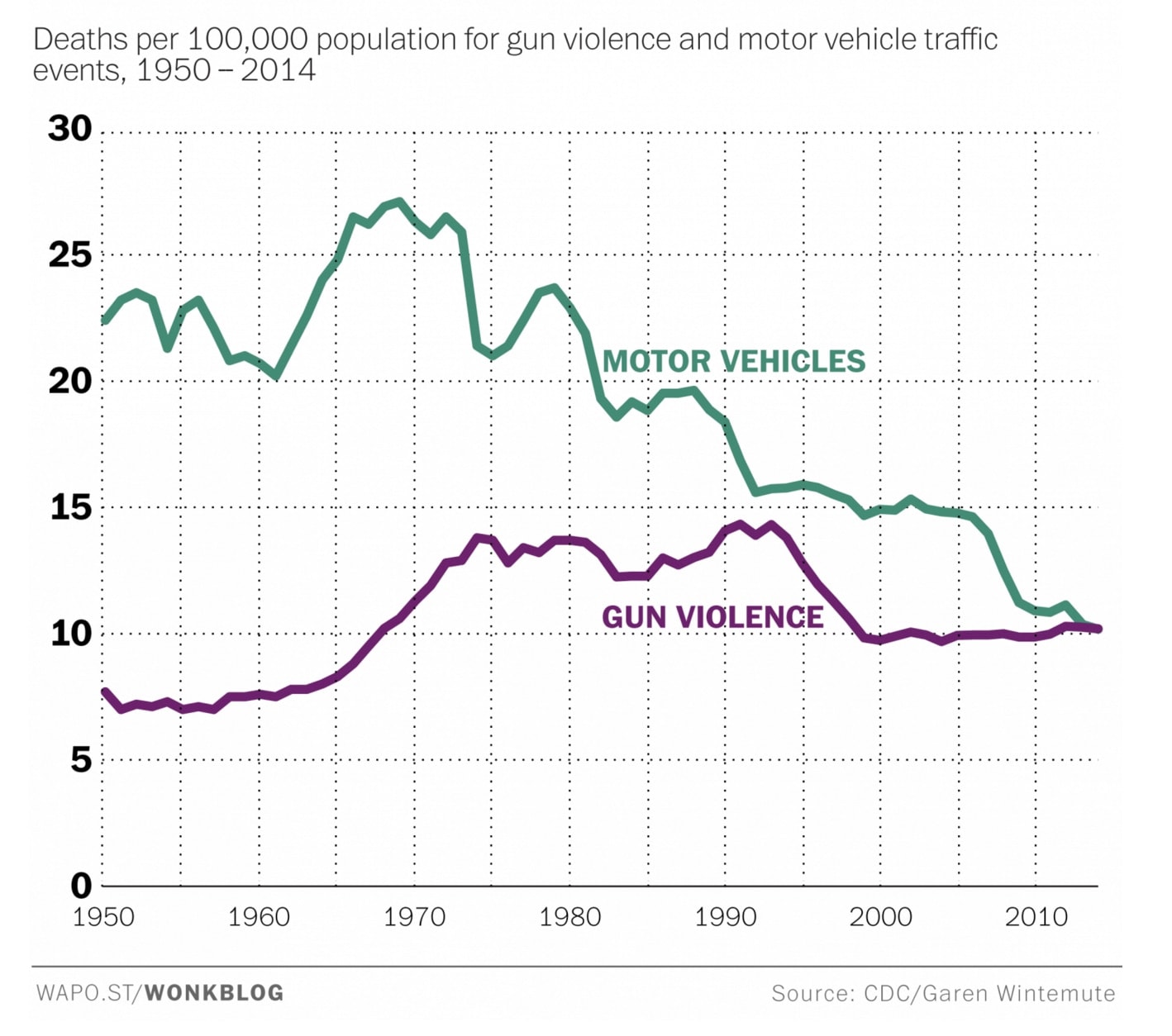 A common argument against gun control in America holds up the number of deaths caused by motor vehicles, which for the past 65 years outpaced firearms deaths, but data released this month by the Centers for Disease Control and Prevention show those numbers converging.

The Washington Post reports that guns and cars are killing Americans at the same rate, 10.3 per 100,000. The data reportedly show a sharp decrease in the number of vehicle deaths and a moderate increase in firearms deaths since the 1950s.

Part of the cause of decline in car deaths had to do with new technology and the implementation of regulations mandating seat belts, anti-lock brakes and airbags, the newspaper reported.

The National Rifle Association argues it’s those things, but not regulations that caused a decrease in vehicle-related death.

“There is no evidence that the decline in motor vehicle deaths is wholly attributable to government regulation as suggested in this article,” NRA spokeswoman Catherine Mortensen told Guns.com Friday. “Bigger and safer cars, such as SUVs and minivans, driving on improved roads, and more Americans living in urban/suburban environments with lower speeds are all more the result of market forces than government regulation. There isn’t a shred of evidence to support the claim that more gun control laws will lead to fewer gun deaths.”

Gun control group Everytown for Gun Safety disagrees and holds up government regulations imposed on the car industry as a model for guns in America.

“Federal agencies have made huge and sustained investments in traffic safety, and we’ve seen a radical decline in the number of traffic deaths nationwide as a result,” Ted Alcorn, Everytown research director, told Guns.com Friday. “A comparable investment in firearm injury research could have a similar impact.”

An attempt was made recently by House Minority Leader Nancy Pelosi, D-Calif., to drop a 17-year ban on funding for CDC research on gun violence, but ultimately failed. Though Congress passed a trillion-dollar spending bill Wednesday – keeping the government in operation for the time being – the 2,009-page bill didn’t include a provision to ensure the federal agency can spend money on firearms research, The Hill reported.

“It’s not a coincidence that spending on automobile safety research is more than a hundred times greater than similar types of research conducted on firearm deaths,” Alcorn said.

It was during a peak in the early 1970s that almost twice as many people were killed by cars than guns and it wasn’t until the 1980s that motor vehicle deaths started to decline, while firearms deaths remained relatively stagnant before declining slightly in the 1990s. While the 2000s saw a steady 10 deaths because of trigger pulls, car deaths were steadily declining.

The data reportedly include homicides, suicides and accidental deaths by gun and car crashes involving other cars and pedestrians.

“That is a mental health issue, not a gun issue,” Mortensen said. “Despite very restrictive guns law, both Japan and South Korea have among the highest suicide rates in the world.”

Data also show gun deaths outpacing those cause by cars in 21 states, while just 10 years ago that was only the case in Alaska, Maryland and the District of Columbia, the Post reported. 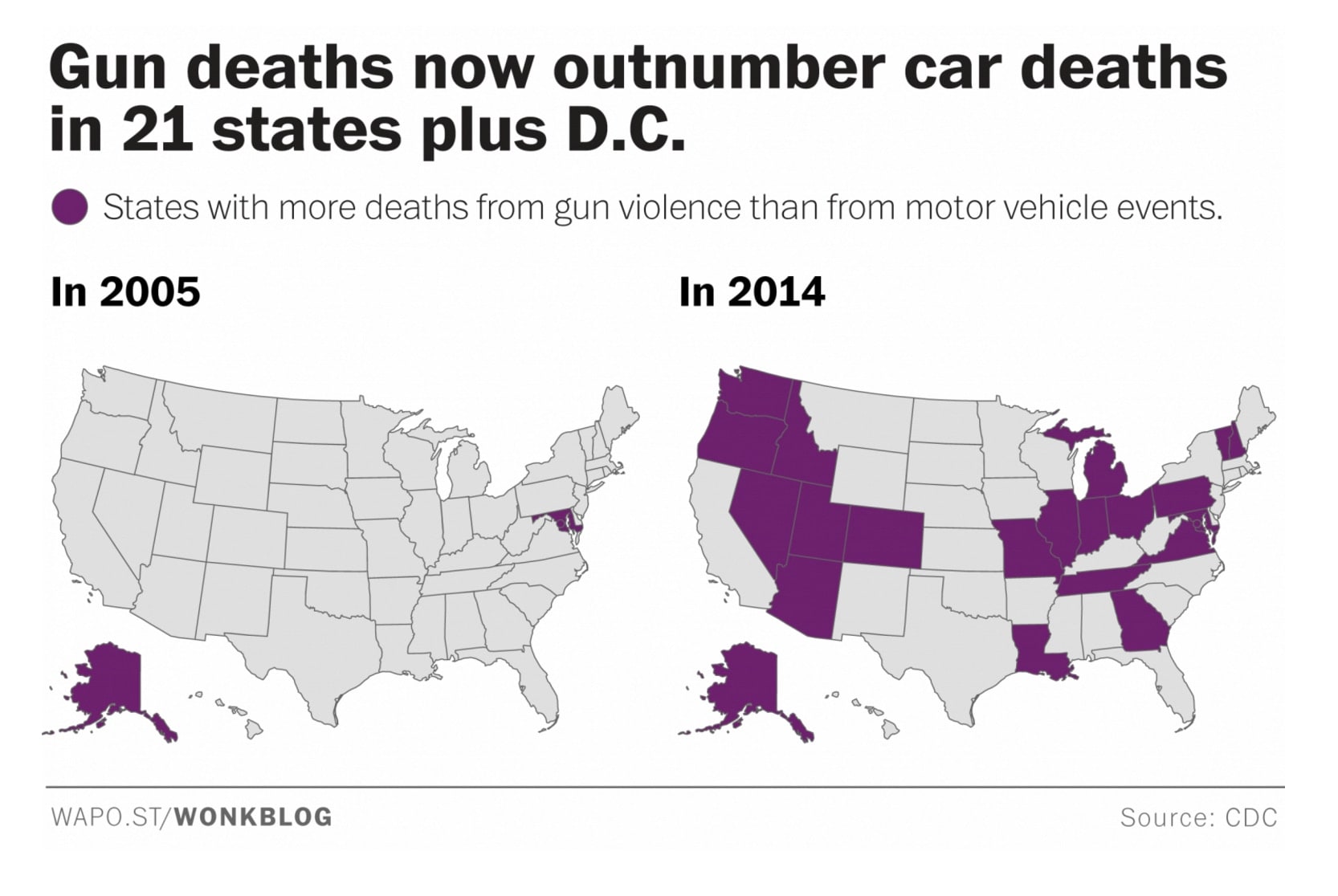