Cabot teases 1911 made from meteorite 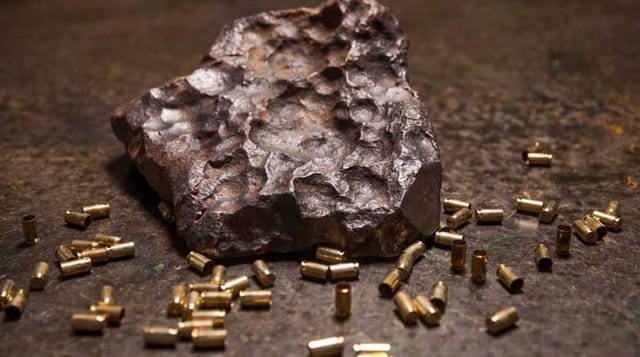 The Gibeon meteor that will be used to mold a pistol. In the past, the company used the materials to form grips. (Photo: Cabot)

“It’s both romantic and fascinating to imagine that this meteor traveled across the heavens for four billion years before landing on Earth and is now being transformed into Cabot pistols,” said Rob Bianchin, the company’s founder and president, in the announcement.

The Indiana-based company obtained a 35 kilogram portion of the Gibeon meteor, which calls “the Cadillac” of meteors. It was discovered in the sub-Saharan part of Africa now known as Namibia in 1838. However, experts think it landed on Earth during pre-historic times.

Tiny portions of it has been used by jewelers such as Rolex, but the meteor’s composition poses unique challenges for gun makers.

Cabot described the process, saying, “To merely cut the meteorite, a three-dimensional laser scan of the meteorite was created to plan the cuts required to make each component of the pistols in a process analogous to cutting a rare diamond.”

Additional details about the pistols, dubbed “The Big Bang Pistol Set,” will be released over the coming months. The company anticipates the guns selling at auction and estimates them selling for between $500,000 to $1 million.

The Big Bang Pistol Set will be on display during the upcoming Shooting Hunting Outdoor Trade Show in Las Vegas, and make a public debut during the National Rifle Association’s annual convention later in 2016.