Long before the Bundy's, Mohawk warriors resisted 'tyranny' in Canada 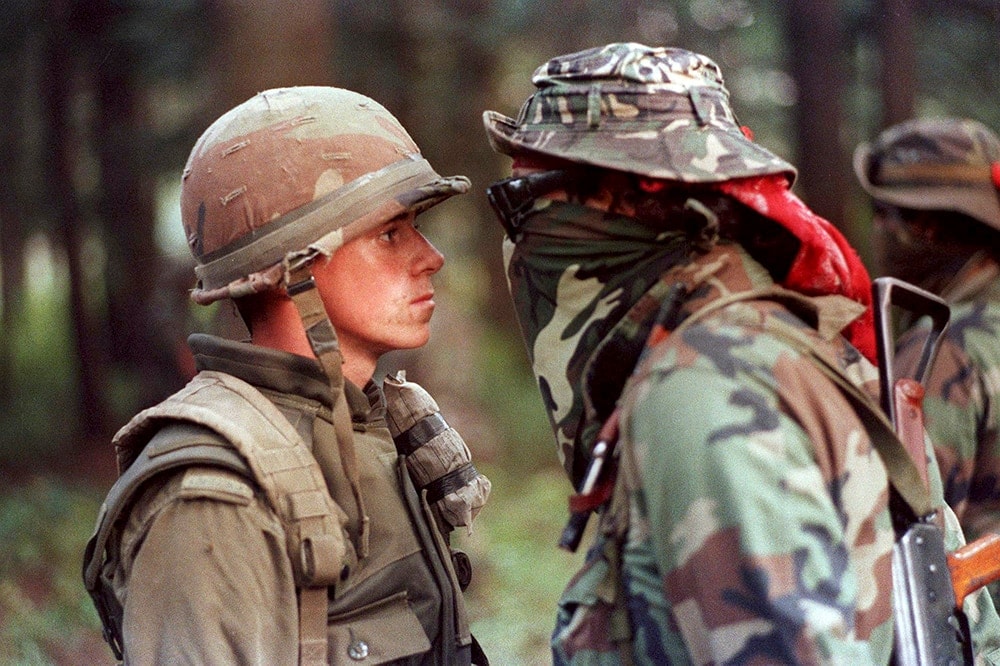 Soldier Patrick Cloutier and warrior Brad Larocque stare each other down during the height of the Oka crisis in Canada in 1990. (Photo: Shaney Komulainen)

Twenty-five years before the Bundys took to arms in Nevada and now Oregon, Mohawk warriors of the Kanesatake Indian Reserve in Quebec confronted the Canadian military in an armed stand-off that ended in a gun battle that killed a policeman and dozens of others.

The Oka Crisis of 1990, as it is known, began when the town of Oka, Quebec, wanted to expand a private golf course from nine to 18 holes onto sacred Mohawk grounds that bordered the town. The Mohawks had filed a land claim in 1986 to stop the golf course, but it was rejected on technical grounds. Subsequent appeals failed.

As construction was set to begin in July 1990, members of the Mohawk community erected a barricade blocking access to the area. In response, Oka’s mayor, Jean Ouellette, demanded the barricades be removed, but protesters refused. 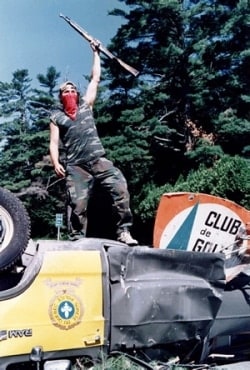 A Mohawk warrior celebrates atop a captured police cruiser later used to barricade the road.

Quebec’s Minister of Native Affairs at the time, John Ciaccia, wrote a letter of support for the Mohawks stating that “these people have seen their lands disappear without having been consulted or compensated, and that, in my opinion, is unfair and unjust, especially over a golf course.”

But Ouellette wasn’t going to back down. He asked the Quebec provincial police to get involved and dismantle the barricade. The Mohawks asked their women, regarded as the caretakers of the land, what to do. They were instructed to resist, and so they armed themselves.

On July 11, 1990, a force of 100 police officers assaulted the barricade with tear gas and flash bang grenades. It’s unclear who fired the first shot, but a 15-minute gun battle ensued. Wind blew tear gas back at the police who fell back, abandoning six cruisers and a bulldozer. During the battle, 31-year-old Cpl. Marcel Lemay was killed — later determined that he was accidentally shot by his own officers.

The Mohawks seized the bulldozer and used it to crush the cruisers and build a barricade across the main highway. As news of the battle spread, the number of Mohawk warriors increased from 30 to 70 and later to 600, as they were joined by warriors from across Canada and the United States. Additional barricades were built by the Mohawks to protect their Reserve.

The Quebec police erected their own barricades and a 78-day stand-off began.

Mohawks from the nearby reserve of Kahnawake showed their solidarity with Kanesatake by blockading the Mercier Bridge, a major route in and out of Montreal. This caused a great deal of traffic disruption and anger mounted towards the Mohawks as the crisis dragged on.

A federal Crown-in-Council agreed to spend $5.3 million to purchase the section of land where the golf course expansion was to take place, to prevent any further development. However, this proposal enraged the Mohawks who wanted the problem that led to the situation to be addressed so it wouldn’t happen again in the future. 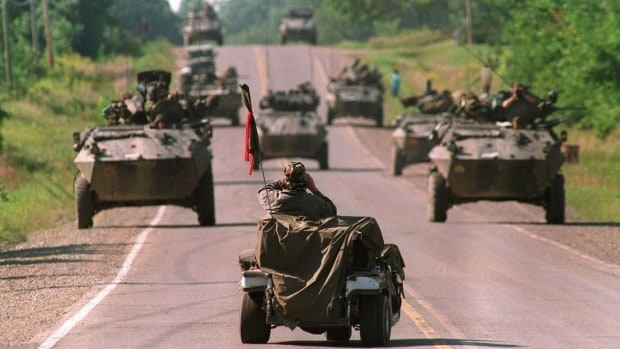 Sitting in a golf cart, a Mohawk warrior uses binoculars to watch Canadian Army armored vehicles  on the Kanesatake Reserve at Oka.

Despite this escalation, no further shots were fired. On Aug. 29, 1990, the blockade at the Mercier Bridge was removed and on Sept. 25, 1990, the Mohawks at Kanesatake laid down their guns, burned tobacco and returned to their reserve.

Arrests followed. Among those charged and convicted was a warrior named Ronald Casalpro who was beaten by the Quebec police after his arrest. The officers were suspended without pay and by the time charges were laid, the officers had already left the force.

The golf course never was expanded and the situation has remained relatively calm since then although tensions still remain between the Mohawks and government of Quebec and Canada.