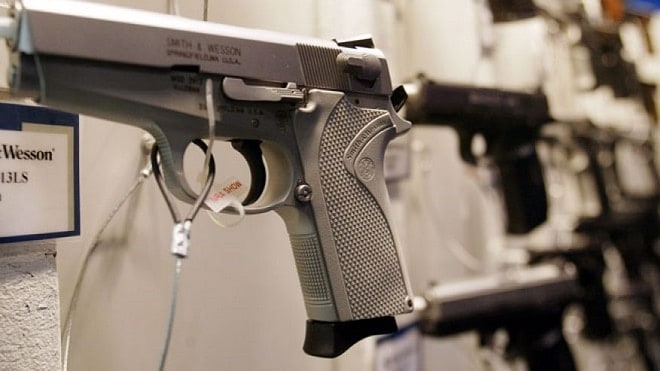 More than 80 pistol models dropped off California’s handgun roster this month and gun makers, to include Smith and Wesson and Ruger, are not adding replacements. (Photo: AP)

The list of handguns approved for sale in California continues to decline at a steady rate as no new guns are added due to microstamping requirements and older guns are removed.

California’s Unsafe Handgun Act, which includes a roster of handguns that meet the state’s expansive safety requirements was established Jan. 1, 2001, and is getting gradually smaller.

Under state law, new semi-automatic firearms sold in California must have the capability to permanently stamp shell casings fired through the gun with an identifying mark. In effect, creating a serialized shell casing that could be tracked back to the gun that fired it. However, this technology is not in a current production handgun.

Since January 2014, when the UHA roster contained 1,152 approved models, it has constricted to 741 in the past two years as legacy handguns, certified for a five-year period, cannot meet the state’s new microstamping mandate that took effect in 2013 and fall off the list. In 2008, the number of guns on the roster stood at over 1,400.

This month no less than 80 guns to include several models of Colt’s M1991, a dozen Sig Sauer P-series variants, a whole page of Springfield XDs and the last two Ruger semi-autos on the list — the discontinued P95/KP95 pistols — all passed their certification period and were subsequently removed.

Worse, the list of guns recently added is blank as manufacturers to include Ruger and Smith & Wesson have declined to re-submit any of their guns following the addition of the microstamping requirement.

“California’s handgun roster and microstamping laws are a nothing short of a ban on safe, modern firearms that are commonly purchased by residents of other states for lawful purposes like self-defense,” Brandon Combs, executive director of the Calguns Foundation told Guns.com Tuesday.

“We predicted years ago that the roster would continue to shrink, and we’re seeing that here,” he said.

Calguns estimates that at the current rate the number of approved handguns will dwindle to practically zero within the next six years as those currently approved will fail to meet new requirements, leaving a state of some 38 million unable to purchase new semi-automatic handguns.

Earlier this year federal judge found the use of the roster, though it prohibits many pistols commonly sold in the rest of the country, does not violate the Second Amendment.

“The UHA does not adversely impact the access to and sale of firearms generally; plaintiffs’ Second Amendment rights are satisfied by the scheme’s allowing the purchase of nearly 1000 types of rostered firearms. This degree of regulation is negligible and does not burden plaintiffs’ rights under the Second Amendment,” wrote U.S. District Judge Kimberly J. Mueller, a 2010 appointment of President Barack Obama in the Pena case, brought by the Second Amendment Foundation and Calguns.

The National Shooting Sports Foundation and Sporting Arms and Ammunition Manufacturers’ Institute took an alternative route and challenged the microstamping law itself in California Superior Court in 2014. That case was dismissed by a state judge who cited the doctrine of sovereign immunity though the trade groups are appealing that ruling.

The Pena case, challenging the roster, likewise is currently on appeal to the U.S. Ninth Circuit.

In the meantime, the only way to purchase a new semi-auto handgun not on the list is to be a law enforcement officer, movie prop master or other protected classes that are exempt from its requirements, a guideline that has Combs puzzled.

“If handguns that are not on the roster are so unsafe, then why does California allow law enforcement officers to buy them for personal use?” he asked.