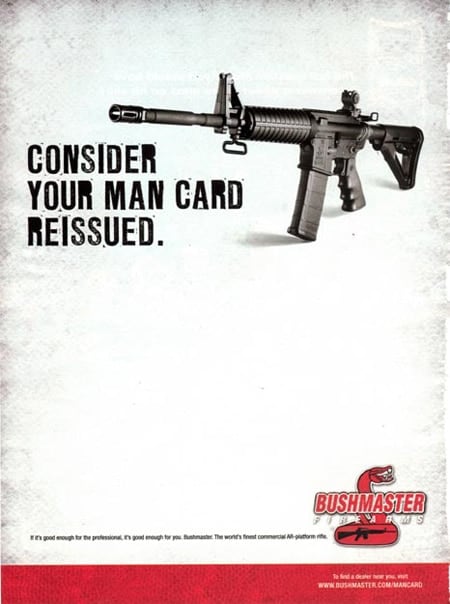 An advertisement once used by Bushmaster pre-Sandy Hook.

Attorneys with Remington Outdoor Company will argue in a Connecticut state court Monday to dismiss a case that claims Bushmaster’s marketing military-style guns to civilians played an influential role in motivating the gunman who massacred Sandy Hook Elementary School in 2012.

The class action suit was filed by nine families of the 26 children and adults killed on the two-year anniversary of the massacre. The case survived almost a year-long stint in federal court, where attorney’s with Remington, the parent company of Bushmaster, pushed it in hopes of having it dismissed under the Protection of Lawful Commerce in Arms Act, which shields gun makers from liability if their firearm is used with malice. However, PLCAA permits cases that establish a clear connection and an act of negligence, making the Bushmaster case interesting.

As The Trace, a media outlet funded by gun control group Everytown that focuses on gun violence, points out: the lawsuit heads into uncharted territories with regard to PLCAA because the gun industry’s marketing tactics have not been used against them in court.

John Culhane, of Widener University’s Delaware Law School, a longtime advocate for using litigation to reform gun-industry practices, told the website that the case will have slim chances of success but will likely shape public opinion.

“It’s a long shot,” Culhane told The Trace, adding the argument could be powerful if the case continues. Positioning the case as a contest between commercial exploitation and parents mourning murdered children puts enormous pressure on the industry, he said.

Following the Sandy Hook killings, an incident in which the gunman murdered 26 victims with a Bushmaster AR-15 before killing himself with a pistol, there was a noticeable push by the gun industry to reshape public perception of AR-15s, mainly publicizing the ubiquity and versatility of the platform and coining the term “Modern Sporting Rifle.”

The lawsuit was pushed back to a Connecticut court in October, where it has ties to a gun store connected to the shooting. Originally, the class filed the case in a Superior Court in Connecticut in December 2014. The complaint detailed how the AR-15 rifle was adapted from the M16, and the similarities they share.

“Both weapons are designed for mass casualty assaults,” the complaint stated. “Both share design features of exceptional muzzle velocity, the ability to accommodate large-capacity magazines, and effective rapid fire.”

The document highlighted language used by Bushmaster to market its products to a civilian market. At one point before the shooting, Bushmaster used phrases like “military-proven performance,” “the ultimate combat weapons system,” and “Forces of opposition, bow down. You are single-handedly outnumbered” in its advertisements.

Essentially, the lawsuit argued, Bushmaster created an attitude that its model XM15-E2S empowers the shooter by giving them the ability to perform like a solider in the theater of war.

The hearing is expected to begin at 2 p.m. EST in Bridgeport.