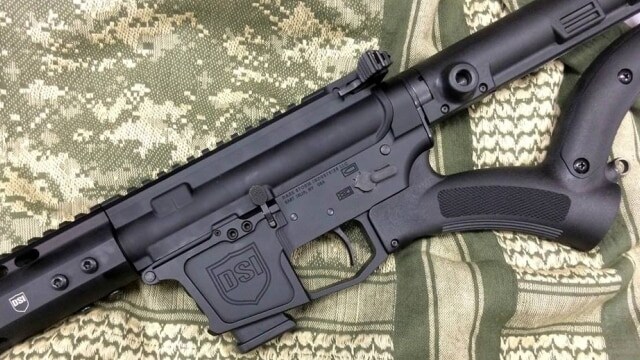 Guns like the DSI-9 SAFE Act approved AR may be on the outs moving forward. Or maybe not, nobody really knows for sure right now…

In the past few days dealers in New York are advising the sale of “featureless” configurations of AR or AK style rifles may now be on hold, though state gun rights advocates disagree.

The 2013 SAFE Act defines an “assault rifle” as a semi-automatic rifle that accepts a magazine and has at least one part from the list of 10 banned features or “military characteristics,” which are essentially just cosmetic features, such as pistol grips and telescopic stocks — cosmetic features that make the gun easier to use.

However just as soon as the law was established various manufactures began marketing “featureless” rifles which were compliant with the law. Essentially really weird looking ARs and AKs that met all the requirements of Gov. Cuomo’s new scheme.

Then on March 11, Dark Storm Industries, located in Oakdale, New York, sent a signal balloon up on social media warning that things may be coming to a screeching halt. Acting on information provided the maker by the New York State Police, they advised a number of changes were in the pipe, and moving forward DSI was stopping sales of some items.

Any “featureless” configuration on an AR or AK style receiver is NOT compliant. This includes: the Spur, the Thordsen FRS, the Monsterman, the Boar and all other similar items where the hand is below the action of the rifle.
• “Featureless” rifles including the Mini 14, Saiga Sporter, Ruger 10/22, Ares SCR, etc. where the hand is behind the action of the rifle ARE compliant.
• The AR Mag-Lock mechanism which allows removal of the magazine when the action is open is NOT compliant.
• The DS-15 FX series fixed magazine receiver and rifles which are manufactured as a “fixed magazine” ARE compliant.

This brought heated debate on the company’s Facebook page with almost 200 comments logged in a four day period– many blaming the recent refusal of the New York State Rifle & Pistol Association to send their SAFE Act lawsuit to the Supreme Court following the death of Justice Antonin Scalia, as the reason for the possible State Police crackdown.

Then on Tuesday, Tom King, NYSRPA president, hit back publicly against Dark Storm in a post to social media.

“Today I can say without reservation after having checked with the NYSP and the Attorney General’s Office that there is no SAFE Act update of compliant firearms, accessories or receivers. Why this information was circulated without vetting is beyond comprehension but maybe you should ask Dark Storm and the other organizations that foisted this on us all,” wrote King.

Which minutes later brought Dark Storm’s reply that they held back some information due to potential litigation but then chose to share it with King.

“We have been in touch with Tom King from NYSRPA and have provided him with additional details that were not made public,” said DSI. “We expect that NYSRPA will support us once all of the facts come out.”

And we will keep you informed when they do.