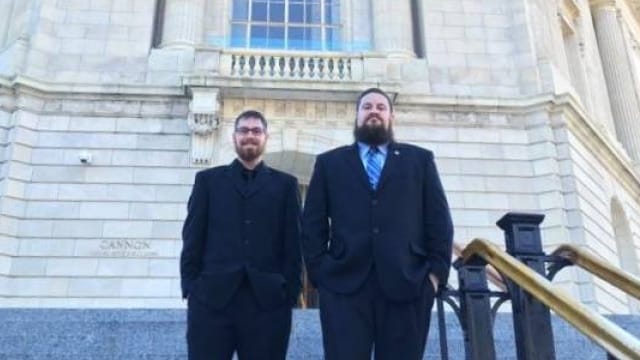 YHM owners Chris and Kevin Graham have been getting out of the shop and walking the halls in Boston and Washington talking to lawmakers about suppressor reform. (Photo: YHM)

Florence, Massachusetts-based Yankee Hill Machine is working with lobby groups and lawmakers to help make the Commonwealth a little quieter.

Massachusetts is just one of nine states that do not allow for the civilian ownership of the devices, with the more than 9,000 currently registered under the National Firearms Act in the state all in the hands of manufacturers, Class III dealers and law enforcement.

However, that may be subject to change as– for the first time– a proposal to legalize the devices passed a legislative committee in the state last week.

State Sen. Humason, R-Westfield, introduced the bill at hand, S.1271, last April and, after cooling its heels for almost a year, was reported favorably out of the Joint Committee on Public Safety and Homeland Security on March 9. While establishing penalties for illegal use of the devices by prohibited possessors or in crime, it would allow suppressors in the state so long as they are NFA-compliant.

Yankee Hill Machine, based in Florence, about two hours from Boston, makes and sells suppressors nationally but, due to state law, can’t sell them to fellow Massachusettians inside the state they have called home for 65 years.

“The passing of Bill S.1271 would be a great opportunity for Massachusetts,” said Graham, whose company employs about 70 employees in the Commonwealth. “Currently, 41 other states allow their citizens to possess sound suppressors. This includes neighboring states such as Vermont and Connecticut.”

Data released by the Bureau of Alcohol, Tobacco, Firearms and Explosives last summer showed a huge jump in National Firearms Act items to include a 39 percent rise in the number of suppressors registered nationwide from the year before. Graham and his brother, co-owner Kevin, are currently in the process of purchasing a new manufacturing facility and hiring more people to help accommodate the huge national push right now for suppressors.

“Part of the need for a larger, more efficient facility is the increasing acceptance of sound suppressors across the country,” he said. “We are seeing a strong steady growth in the sound suppressor market year after year. The passage of bill S.1271 would only help by adding another state full of sportsmen and shooting enthusiasts who would be able to legally own a sound suppressor.”

“Plus, it would be nice to be able to personally own the product that we manufacture,” he admits.

YHM and other manufacturers, along with trade groups, have been on the forefront in an effort to educate people on the benefits of the sound moderating device provide to both the shooter and the neighborhoods around shooting ranges. The brothers Graham have also made trips to Capitol Hill in Washington talking to lawmakers there about the Hearing Protection Act, which would deregulate suppressors from NFA regulation.

A lot of the battle is in trying to get away from the Hollywood stigma associated with “silencers,” which has long poisoned reform.

“This problem stems from the fact that the vast majority of people have never actually witnessed a sound suppressor in use,” said Graham. “Their only exposure comes from movies where a bad guy uses a sound suppressor to shoot someone in a crowd without anyone noticing. In real life, the bad guy would still end up in handcuffs.”

This phenomenon was witnessed last month in Iowa, when a House Democrat debated passage of a suppressor bill on the floor by offering up her experience with the devices from television.

Even with passage from committee last week, it’s still going to be a struggle in Massachusetts, with some of the strictest gun laws in the country, to pass S.1271. The state Senate is controlled 33-5 by Democrats and the House has a similar 122-34 makeup. Still, YHM is working with the American Suppressor Association, the NRA and local groups to help educate lawmakers and gain traction.

“It has been a pleasure working with the Gun Owners’ Action League to introduce the suppressor issue to Mass legislators, and we are hopeful that this bill will continue moving forward quickly so that we can bring suppressor ownership rights to the seven million citizens in Mass who currently cannot protect their hearing with suppressors,” Michael Williams, general counsel for the ASA, told Guns.com.

S.1271 was referred to the Committee on Senate Ways and Means on March 14 and is awaiting hearing.